Yesterday at Maelstrom we re-fought a part of the Battle of Leipzig, namely the Battle of Liebertwolkwitz. Quinton had arranged the game and six of us played out the scenario on the day.

On the French side, Pete A took the part of Murat, James the part of Lauriston, Pete H the part of Drouot & Kellerman. I  played Victor on the right flank.

Quinton took on the Austrians and Al took the Russians. We were short on Prussians so their numbers were made up with more Austrians, it is a good job that Quinton has so many. Adie was also going to play on that side but had to drop out at the last moment.

Our commanders were all CV7 and our infantry all had a paltry moral save of 5+. We would be up against it.


I am not sure of the Austrian / Russian order of battle, but they had lots as can be seen from the images below.


There were several pre-programmed events through the game and several random events that could affect the outcome. For the first three turns the French were unable to issue orders advance past their starting positions.

I'll start a battle report now, but as is usual with large games it will mainly be focused on my sector of the battle where Victors troops took on the Russians.

For the initial three turns we were not allowed to issue our troops into battle, so I had to make small adjustments to my deployment. However, I was very fortunate, because the Russians opposite me were very poor at giving orders, so bad in fact that one brigade did not make a move until the fifth turn. One Russian brigade did advance though and I was able to maul it quite badly.

On the other flank the Austrians were much more dynamic - well that is a turn up for the books - and were soon engaged with Lauristons division and pushing hard.

On my flank, not much was happening. Although at the start of turn three we had to roll a dice. A six, "is that good" We were given the news that Napoleon had arrived and our spirits were bolstered, our commanders were all raised to CV8 and our troops got a proper Moral save of 4+. In more good news we could now advance on the enemy!.

Victor was soon issuing orders and one battalion was rushed into the farm on the left flank of the isolated Russian brigade. The rest of the brigade were soon engaging the brigade from the front.

Things were not going so well for Lauriston on our left flank and the Austrian attacks were soon starting to tell.


More good news on turn 5,  Drouot organises a Grand Battery on Gallows Hill and the cavalry reserve is committed. One brigade of Carabiniers and Cuirassiers is sent to the left flank to shore up Lauristons weakened Division and the remainder prepares in the center.

The Grand Battery starts pounding the Russians and Austrians in the center.

In my sector things are going much better, the previously static Russian infantry start to make a move, but are unable to clear my battalion from the pig farm in front of their lines in a timely manner. Although my battalion is eventually broken, by this time the Russians are at a severe disadvantage in numbers. The isolated Russian brigade is broken and must start retreating.

On turn seven another random event is rolled, this time by the Russians, and their is much glumness on their side - apparently on a good roll the French would have noticed the Russian Guards massing off table and we would have called off our advance.


On turn nine the Austrians and Russians get another envelope of orders, they must break off their attacks and return to their start lines. Although along the majority of the line the French are unable to capitalise on this as apart from Victors troops there are a lot of broken brigades. However, Victor presses on and the Russians are soon pegged back on the hill line where they started the game.

On turn 12 it is all declared over and pretty much a draw. The French objective of breaking the Austrians and Russians is not me and the Austrians no longer hold Liebertwolkwitz and the Russians got nowhere near Wachau.

Here are loads more images from the game.

Back in my teens I used to own a massive collection of WWII ships and would play many a game of General Quarters with my mates. I let these ships go the way of eBay many years ago, and if I'm honest they looked like they were painted thirty years ago and were not getting any usage.

A couple of years ago we re-discovered General Quarters and I started building up a new collection of 1/3000 WWII naval ships again. Although this time I would find an historical battle and then purchase all the ships needed to play it rather than buying massive, disparate fleets on a whim. I've mainly concentrated on cruiser size battles and below as you can have a really good game on an 8ft square playing area.

A few days ago, I placed a small order on Navwar and with typical Navwar efficiency they were with me in just a few days. It was just a matter then of painting them. This is the method I use:

Here are some shots of the ships painted over the weekend:

Having painted these last few ships, I now have every ship in my collection to do the following historical engagements:

Plus I have a few extra ships so that I can do many 'what-if' engagements too. It's become rather an obsession and I now have the following painted ships in my collection:


Here are some images of the ships painted this weekend:

The Battle of Morgans Crossroads

I set up another game of Black Powder American Civil War with Matt at the White Hart. James was also without a game so it gave me the opportunity to try out a fictitious scenario I had been mulling over.
The CV of the commanders and the attributes assigned to the troops are all randomly determined as are the arrival of the reinforcements.

A Confederate brigade holds the strategically important town of Morgans Crossroads. They are deployed expecting an attack from the west. and Union troops are visible along that road.


A column of troops is rushing to support the brigade in the town up the road from the east.


However a swift Union right-hook means that the town may become out-flanked. A brigade of Union troops have appeared from the south.

The Divisional Commander (CV8) is also supporting this right hook. A 2nd Union brigade is approaching from the West as expected.


Both sides can expect another brigade of troops each to turn up some time.

The Confederates take the first turn and immediately the 2nd Brigade rushes up the road to support the troops in Morgans Crossroads. The 1st brigade commander issues the first of many failed order attempts, but the Confederate CinC is able at least to redeploy the artillery to face the threat from the south.


The Union troops approaching from the west stall, but the flanking force on their right moves to get into position. The artillery battery is deployed on a hill overlooking Morgans Crossroads and in conjunction with the sharp-shooters is soon exchanging fire with the rebels.

As the game progresses, the Union troops eventually arrive and deploy to the west of the town. The Confederates try to counter this by moving a unit out of the town and up to the stone walls, but given some poor order dice the unit is left in the open and cut down by concentrated fire. The Union right flank attack also succeeds in destroying the Confederate regiment holding the right flank of the town and that artillery battery. The Confederates now have a broken Brigade, but the two remaining units occupy the town so do not need to fall back. Their commander has issued a single successful order in about seven turns.

Once the Union troops to the west have deployed  the third Union brigade following them up the road is also able to start deploying onto the table on the right of the 2nd Brigade.

However, the Union does not have it all their own way, rapidly marching to the sound of the regimental bands playing Dixie a Confederate relief column snakes down the road from the woodland in the north.

Despite some mix up with the order of match, these troops are soon deploying on the wood edge on the left flank of the Union second brigade and are also able to support the regiments from the broken brigade in the town. It looks very dicey for the Union second brigade as their first unit is shattered by flanking fire from the woods and poor command rolls mean that they are finding it very difficult to react to the flank attack.

However in the Union center and left the attack on the crossroads is pushed home and the second Confederate brigade is also broken by musket and cannon fire. Having lost two brigades out of three the Confederate force is shattered and must retreat from the field.

We had played at least ten turns and not had a single round of hand to hand combat.

All in all a very good game, at the start of the game I made the commanders roll for their CV, for the Confederates, on a 1-2 they would be CV7 and on a 3+ would be CV8, they ended up with three CV7! For the Union it would be a CV7 on a 1-4 and a CV8 on a 5+, they ended up with two CV8 and a CV7. I think this had a telling effect on the outcome. Also as the Union were more able to dictate the pace of the game, they were able to win the fire-fights and no hand to hand, where the Confederates had superiority took place.

Here are some more shots of the game. all the terrain and figures are from my collection. The miniatures are from Adler and are painted by myself. As we are using 6mm figures we play at half ranges and it seems to give a very good game on a 6ft x 4ft board.

We play a few modifications on the standard Black Powder rules to give what I think is a ACW feel.


There were also a few other games going on at the club on Thursday, and this one in particular caught my eye. A game of DBR in 28m using the lovely 1672 range of figures from Northstar 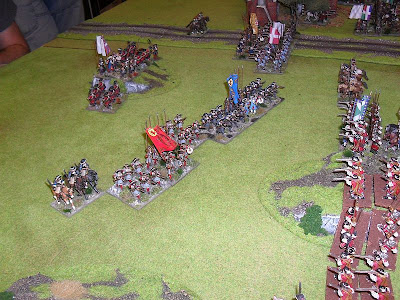