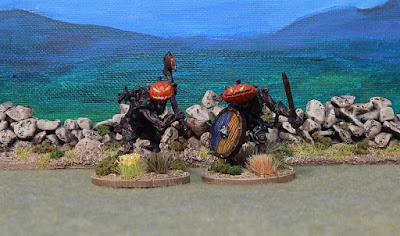 It's been over two and a half month since I last posted anything and what with the house move and everything the painting mojo has been low and the time to work on getting it back up has been limited.

Last week I picked up a pair of Candle Jacks from Northstar. On Monday I got a "sorry we missed you" from the Post Office and rescheduled delivery for Friday, we would be cutting it fine to get them done in time for Halloween. 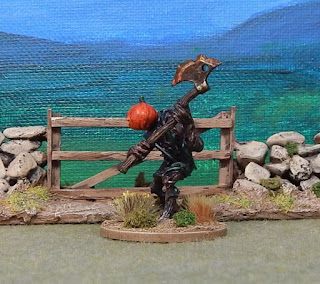 The parcel eventually arrived on Saturday, I would need to crack on to get them done today.

These are multi-part, but quite easy to put together with mitre-bond one of the one with sword and shield is a three part kit, the one with the axe a four part kit. The castings only took a little cleaning up. 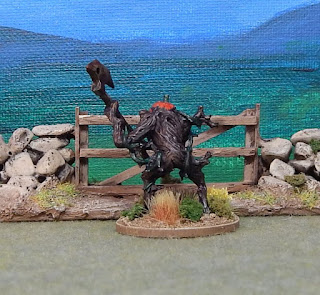 After assembly and sticking on a 30mm Warbases base they were first painted with Vallejo Black Surface Primer and once that was dried given a heavy dry brush with Ivory. 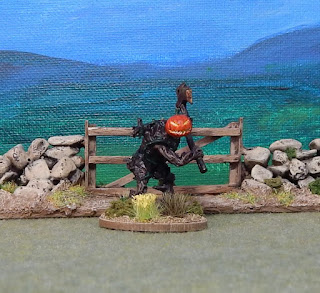 The main body was done in a basecoat of Citadel Contrast Cygor Brown and then highlighted with VMC Beige Brown. The shaft of the axe and the back of the shield were done in Contrast Wyldwood, although strangely there is not much contrast between that and the Cygor Brown. 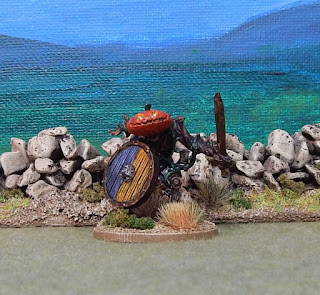 The vines were done in Contrast Dark Angels Green and the shield in Contrast Leviadon Blue and Nazdreg Yellow.
I then started on the heads, the Ivory was reapplied to give a clean base and then I painted the eyes and mouths with Contrast Iyanden Yellow, with the Ivory reapplied at the centre of the eyes. The Pumpkin skin part was done on Contrast Gryph-hound Orange with darker layers added in the recesses. 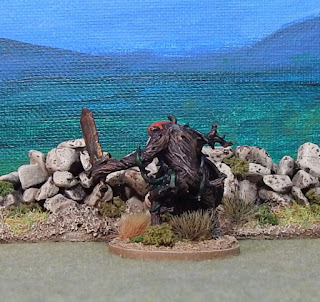 The weapons and shield rim and boss were picked out in Contrast Black Templar and then highlighted with a couple of layers of VMC Gunmetal Grey before being filthied up with Dirty Down Rust.
Once dry the base was finished and the figure given a coat of VMC Matt Varnish. 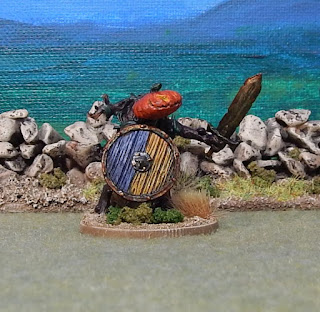