This evening James and I played a game of Dark Ages Hail Caesar at Maelstrom Games this is in preparation for a larger games we have planned so wanted to try a few things out.
James had the combined British Kingdoms with Pictish allies, I commanded the Saxons.
Here are a few shots of the deployment, the figures were from the collections of myself and James, all the British and Picts belong to James and apart from one unit of Saxon Hearthguard, and a unit each of Saxon heavy and light cavalry from James collection, all the Saxons were mine.

We were trying out a few things:
After the game we also decided to add:
As we were playing on a 4ft depth we used 2/3 movement distances.
The game played out really well and the additional rules had a great effect, the Saxons got pulled about all over the place with having to initiative charge on failed command rolls and the infantry on the British left did not move at all. In the end the British were declared the victors having broken all three Saxon Divisions.
Here are a few shots from the battle:

It was time for the Cold Steel Dark Ages gaming day at Gripping Beast last weekend so on Saturday I drove down to Evesham and checked into the Premier Inn. This year the Saturday evening was much better than last year when I had a 'Billy no mates' evening in my room with a take-away pizza. I met up with Steve for some dinner then with Tony and Paul for some beers and a chin-wag.

After a few too many beers for a fat-lad on a diet it was off to bed to have dreams of victory tomorrow, although I much prefer that one about me and Alesha Dixon.


Game 1 was to be a Battle at the River against Simon Pope with his Merovingian Franks.
It was Simon that pointed out to me just how badly wrong I had gotten when I picked my original list.Simon had a Warlord, Great Noble and a Noble, one unit of Comitatus cavalry, one unit of Warriors and Freemen with heavy armour on horses, two units of Warriors and Freemen, a unit of mounted freemen and several units of skirmishers. This was a hard fought game with loads of casualties on both sides. Simon surged across the ford with a unit of Warriors & Freemen brushing aside the unit of Duguth that I had placed to guard it, but they were devastated by a counter charge from my Gedricht. Simon also seized the bridge early on but my Duguth eventually retook it. At the end of the game, the ford was uncontested and I had twice as many troops defending the bridge as Simon did - we were both down to bear bones though. After totting up points I had won 1675 points to Simons 1403. A great game and we both got great scores. I forgot to take any pictures of this game.
Game 2 was to be Battle in the Pass against Carl Fisher with Normans.
Carl had a Dux, two Comes, two units of mounted Milites, one unit of Pueri, one unit of Liberi with spears, one unit of Liberi with bows and some skirmishers with javelins.
There was a large wood in the center of the table, and not fancying the chances of my massed Duguth against the Milites I dived most of my army into that. The Gedriht skirmished in this game and took out the Liberi bows and the Pueri quire early on. Carl sent a unit of nights on either side of the wood, so I pushed out a unit of Duguth against one I had already weakened. Of course, I lost combat and gave ground, but the Gedriht  got a good charge into the rear of the Milites, unfortunately, I fluffed the combat and the Milites held and the Duguth were charged in the rear by the other unit of Milites. The Duguth were lost, but I recovered the Gedriht. By the end of the game neither of us had dealt the killer blow and I had scored 725 points to Carls 462. Mindful of the need to take some pictures I found that my camera had flat batteries - curses!!!!

I grabbed a quick bite of Mrs Miggins famous lunch.

Game 3 was to be a Rescue against Stephen Bennett with British Northern Kingdoms.
Steve had a General and Army Standard in a unit of mounted Teulu , three units of 20 Combrogi each lead by a character, a unit of mounted Combrogi on horses, a unit of skirmishers with short bows and a unit of skimishers with javelins.
We each had a large wood on our left flank whereas I secured the flank of my infantry line on the wood Stephen sent half of his foot through it. We had a bit of a scrap in the middle, me losing one unit of Duguth and Steve losing two units of Combrogi, but I had lost my general and army standard in mine. My Gedricht were unable to make headway on their long left hook and came back into the centre where a unit of Duguth were suffering to the Teulu. I put in a fine rear charge and inflicted 6 wounds. Stephen made five 4+ saves, battered the Duguth and it was all over to a flank charge from the mounted Combogi.
Steve scored 1893 points to my 864, and was kind enough to lend me his camera, I'll upload the images when they are passed on.

The last game was the Attrition scenario against George Cowie with Almohavids.
Due to some bad army selection on my part I was left with the Gedricht, a unit of Duguth, and all my characters. George had an Imam, an army standard, two units of spearmen and bowmen and one unit of Andalusian cavalry. Early in the game I managed to inflict quite a lot of javelin kills on the Andalusians, but my Duguth were being shot to pieces. I charged them in on the unit of spear and bow containing the Imam and Army Standard, but despite some good wounding the result was a draw and the warband auto-break I had hoped for did not come into effect. 'Double-drummers' meant that George held the advantage and after that it was a foregone conclusion with my unit eventually breaking. I had though accounted for half the Andalucians and half of one of the spear/bow units.
George scored 773 points to my 247.
Stephen again let me take some photos which I will upload when I get them.

So to the results, Ed McDonald won by dint of a fearsome Romano-British list and an even more fearsome lack of volume control that left his opponents and surrounding players dazed and confused.

I came in 12th place but was very happy to win the best painted army award.

Thanks to all my opponents and to the Martin and the chaps at Gripping Beast for putting on another excellent event.

Posted by Paul Scrivens-Smith at 13:55 No comments:
Email ThisBlogThis!Share to TwitterShare to FacebookShare to Pinterest
Labels: Dark Ages, Events

It's Cold Steel at Gripping Beast this weekend so I wanted to at least add a new unit to the army.

There are a few more images on Photobucket
Posted by Paul Scrivens-Smith at 09:27 4 comments:
Email ThisBlogThis!Share to TwitterShare to FacebookShare to Pinterest
Labels: Dark Ages, Painting

Following the previous days intense fighting, four replacement Hurricanes are rushed to the Squadron. Working late into the night, the artificers are able to return two planes from the workshop.
Pilot Officer Devlin and Sgt. Kirchner are returned to the squadron.

The current organisation is:

B' flight is scrambled to intercept a stream of enemy bombers inbound to attack airfields inland. However while attempting to gain height are bounced by three schwarm of Bf109 at 9000ft.

68 Sqdn has previously suffered at the hands of the more maneuverable Bf110, but with three Aces up their sleeve, what was to happen this time.

Greg and Ben played 68 Sqdn while I was the Hun.

In secret I rolled up the twelve Hun pilots. 1 Schwarm was led by a veteran, but his section pilots were two sprogs and a regular. 2 Schwarm was one veteran, two regulars and a sprog while 3 Schwarm was even worse, a veteran led three sprogs. If this was a Flying Circus we knew where all the clowns were.

Maybe 68 Sqdn would have a good change against these fellows who were obviously out on a training exercise.

Despite being outnumbered 2:1 the RAF seemed to be everywhere.

Blue section led by Flying Officer Boggs who bagged two of the Bf109 in short order.  Sgt Carradine caused terrible damage to another Bf109 whose pilot coaxes it back to France where most others would have crashed in the channel, however, Carradine jams his guns in the process and has little other effect. Pilot Officer Grant died after a pair of Bf109 chased him down to ground level and his plane exploded on impact without him bailing out.

Green section accounted for another two Bf109 shot down by Pilot Officer Devlin and another claimed as damaged. Sgt Graham and Pilot Officer Murphy put up a good show but fail to Bag any Hun for themselves.

The five surviving aircraft return to Middle Wallop and no more sorties will take place today.

The three aces made a huge difference against the lack-luster German pilots. Pilot Officer Devlin is now on 13 kills. 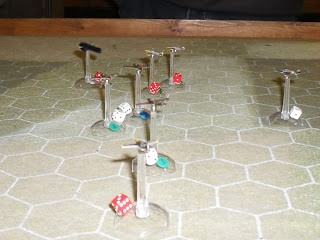 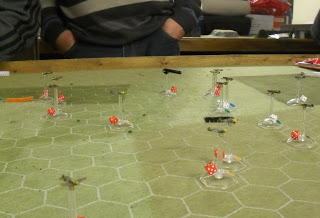 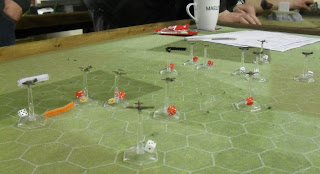 The games was played out at Maelstrom Games on 10th January 2012 and was my first wargame of the year.
Posted by Paul Scrivens-Smith at 22:07 No comments:
Email ThisBlogThis!Share to TwitterShare to FacebookShare to Pinterest
Labels: Bag the Hun
Newer Posts Older Posts Home
Subscribe to: Posts (Atom)