Treasure from the colonies!

I arrived back in the UK yesterday morning with my suitcase seams straining under the pressure of the additional purchases I had made while in Madison, WI.

Most of the goodies were bought as presents for my wife, mainly craft and baking stuff, so nothing to report on here, but I did get the opportunity to pop to a couple of game stores to fulfil my own 'itch' 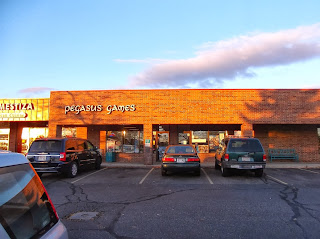 I had done some prior recce using Google and had noted that both Pegasus Games and The Last Square were both located about half a mile apart on Odana Road. My colleague Julien from the Lyon office is also a gamer, so we arranged for a colleague to drop us off at Pegasus games.

Juilien is mainly a Role playing and card gamer and managed to pick up an RPG supplement that had had been looking for, but was disappointed with the pricing on quite a few items, most of which he could get cheaper in France.

We then set off to walk to The Last Square, of course as there are two ways to walk along Odana we initially chose the wrong direction and after about half a mile came to a T-junction where Odana ended so turned around, walked back past Pegasus and on towards The Last Square.

Along the route we did find this place that seems to be a restaurant specialising in Zombie catering.

I also popped into a cook shop while we were walking along to pick up some Halloween goodies for Victoria. 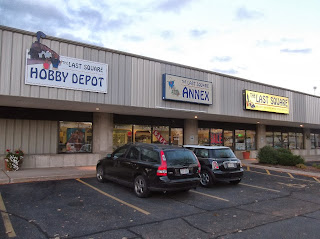 After about 15 minutes we arrived at The Last Square which is quite a bit larger than Pegasus Games, being about three frontages rather than just the one, a Games Store, an Annex and a Hobby Depot.

Here I picked up a Tie Interceptor ($14.95) and a Noble Games gaming mat ($31.95), the latter was for Jon who had noticed that they had been reduced from $39.95 to $31.95 on The Last Square webstore . The store did not initially want to give the 'internet' discount so it was almost not purchased but they did agree to do that so John now has his cloth which I will pass on in the next couple of weeks.

So here is the treasure from my trip to the colonies. 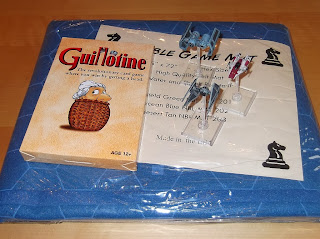 Posted by Paul Scrivens-Smith at 15:24 3 comments:
Email ThisBlogThis!Share to TwitterShare to FacebookShare to Pinterest
Labels: On Tour, X-Wing Miniatures Game

I have an early flight from Manchester to Chicago in the morning as I'm going to be out of the country for a few days visiting our office in Wisconsin.

I hope to take an opportunity to drop into The Last Stand while I am there.

Posted by Paul Scrivens-Smith at 11:11 4 comments:
Email ThisBlogThis!Share to TwitterShare to FacebookShare to Pinterest
Labels: On Tour

The last time I painted any Adler ACW was February 2012 while on holiday in Cornwall when I painted eight bases each of Union and Confederate cavalry. As mentioned in a previous post I've lately been rather busy with work and other events so only had limited time to do any painting.

This past week or so I've done the dismounted figures and horse holders to go with that unit and another 16 casualty / disorder markers.

The Adler ACW are fantastic for painting in short bursts, I did each the two units of dismounted cavalry in about an hour an evening over two separate weekends, the horse holders in one lunch break and the casualties in another. The basing took about an hour on another evening. All in all about four hours work to take them from sprayed black to this state.

I enjoyed painting them so much I bought another load of Adler ACW at Derby last weekend.

Another section of Indian Infantry

What with the Colours and Worlds events and a busy schedule of working away I've been a bit quiet on the painting front.

I had this section base-coated and washed at least five weeks ago, but I made the time this week to finish off the highlights and do the bases. They got a coat of Testors yesterday and I took some photos while cooking breakfast this morning.

These are all Perry Miniatures plastics were painted using my usual method.

Some of the photos are a bit blurry, sorry about that.


Posted by Paul Scrivens-Smith at 07:47 3 comments:
Email ThisBlogThis!Share to TwitterShare to FacebookShare to Pinterest
Labels: Battle of Keren, Painting, WWII

Ibn Scrivs takes on the World...

... or at least plays in the Warhammer Ancient Battles tournament at the 'World Championships' held at Castle Donnington over the weekend. Wayne Richardson did a splendid job of both summoning up enough numbers for the event and running it on the day.

Despite being shot to pieces in every game I particularly enjoyed playing with the Almohads at the 'Colours' event in Newbury a couple of weeks earlier so making a few changes to fit into the lower points allocation I decided to use the following:

Basically the same list but with fewer but larger spearmen blocks, less Military Order Knights and swapping the Spanish spearmen for crossbowmen. Plus the addition of the 'Secret Weapon'

As would be expected, I was unable to tie down the cavalry but I did managed to break all the infantry blocks. However, one of the halberdier blocks rallied a few inches from the table edge. In the closing turn of the game, Andy was two points off of breaking and I broke that unit in combat. The halberdiers were just over four inches from the table edge, I rolled a four for my pursuit dice, Andy also rolled a four for his flee - I failed to break his army.
I scored 1890 to Andys 1725 so a 16-16

After a bite of lunch and a quick bit of shopping, during which I purchased a Sarissa 'Wild West' shack and some Frontline accoutrements from Great Escape Games I would be playing Grahame Middleton with his Late Imperial Romans.

I managed to get quite lucky against the Roman heavy cavalry, one unit was shot down to 5 men by my crossbows and skirmishers and the other charged my Military Order Knights, I counter-charged, Grahame rolled appallingly and I did just enough to break him with my 'First Charge'. Grahame piled in with the Foederati but my line held and eventually broke them. With my Military Order Knights now on his flank and my Berber infantry on the warpath it was soon over. Grahames army broke and I secured a 23-9 victory.

The final game of the day would be against Phil Vernon who had borrowed Wayne's Normans for the weekend.

This game was limited to six turns and was very cat and mouse for the initial half of the game. I managed to run off his Crossbowmen with my Berber horse and Military Order Knights and one of his Breton units only consisted of two men. I had however lost a unit of Berber horse and one of my Berber infantry blocks had been severely depleted by bowfire.

Phil saw his chance and declared his charge on my Berber foot, I though 'that looks long' and it indeed was - 14 1/2 inches. I seized my opportunity and declared a charge with a unit of my Berber infantry, Phil passed his fear test for the tethered camels and combat ensued. My dice rolling was particularly poor and Phil easily won the combat although the leadership of the Caliph held the troops. In Phils' turn he again  won the combat and held. Now was my chance, my Military Order Knights piled into the flank of the combat....

....and scored a single wound! I again lost the combat and my First Charge was all for naught. Turn six came and went and our losses were within 10pts of each other, another 16-16 draw.

Home that evening for a slap-up supper with Victoria and fell asleep watching The Hobbit on NetFlix.

Had a lie in in the morning and got to the venue around 09:15 to find I would be playing Bob Stradling with his Later Saxons. Bob started the engagement in the best possible way with a slice of his wife's home-made Bakewell tart - yummy!

Bob was fielding an Army Standard Bearer (no General), seven units each comprising 6 Huscarles with heavy armour, shield and double handed weapons backed up with 12 Thegns, one unit of 15 Vikings with assorted hardware and five units of skrmishers, two with bow, one with slings and two with javelins.

Bob had taken a lot of Riding Horses so was well positioned to stop me getting my horse around the flanks. I had a go at it but turned back when it became clear that I would not get around. My missile fire was desultory against the Shieldwalls but most of the Saxon units had lost rank bonus by the time they reached my lines.

Having failed to encircle the Saxons with my cavalry I though I would be doomed once the infantry slog began, however Two of my three Berber infantry blocks broke the Saxons fighting them, while the one on my right flank held up well right until it was flanked by the very troops my cavalry had been trying to outflank.

By the end of the game we were within 300pts of each other and it would be another 16-16 draw.

Another quick bout of shopping around the show, I picked up a bag of 15mm round bases from Minibits and some more 6mm ACW reinforcements from Adler Miniatures.

This game was turn limited to seven turns. This time I made a more determined effort to manoeuvre around the flank of the Saxon Army, while the Saxons plodded on in Shieldwall, I pushed my Knights and a block of Berber infantry onto their left flank held only by the 'villagers' My Knights charged in and the three attacks I allocated against the Earldoman killed him dead, but the two hits on the Thegns 'double-oned' their wounds, to add insult one of the Fryd killed a Knight and I failed the subsequent break-test - bugger!

The Knights rallied and the Berber spear got stuck into the villagers eventually routing them but being charged by one of the Huscarle/Thegn blocks and being broken themselves. The Berber infantry rallied but caused a panic test in the Knights who did not recover.

Five great games and I'd managed one win and four draws, not a bad result at all, much better performance than when at Colours. When all the scores were counted up I was actually in third place overall - how on earth did that happen?

Wayne had organised a great event and I hope to attend again next year.

The only problem with the venue is the lighting. I only got a couple of decent-ish pictures and they have come out a sickly yellow colour.