We have noted that three hours on a club night is really not enough time to play a game of I Ain't Been Shot Mum, reckoning that four hours was probably required, we booked the function room at the White Hart for a game yesterday afternoon.

James, Mark and I decided that we would meet at 12:30 for some lunch, then get the table set up and play through to about 6PM.Wayne and Natalie joined us for some lunch, but would not be playing.

We took a little longer over lunch than expected, and then retired upstairs to set up the table for the 'A Canadian VC' scenario from the I Ain't Been Shot Mum rule book and by 14:00 everything was set up and ready to go.

Having German blinds on a hill against Canadian troops in the open deployed on a road mean that Mark was pretty much able to spot everything as it entered the game. James elected to change the axis of attack with his initial two platoons (one Armoured and one infantry) and headed across the table.

Mark had some good rolls for his reserves and moved up troops to support the thin screen of forces available to him.


The platoon of PzIVH moved from their position on the crossroads to engage the Canadian troops moving up the road, but the shooting was poor and very little was done to stop the attack.


Reaching the road, the Sherman platoon attempt to advance, but a blind facing them is revealed to be a Tiger and a Panther. However, due to some terrible shooting and some fantastic saving throws, it takes two long 75mm shots and two 88mm shots before a Sherman is knocked out.

On the other axis of attack, the Canadians engaged the PzIVH with their Sherman troop. The first Sherman shot of the game hit home, and the hit dice rolled - 8 hits!, the PzIVH rolled it's defence and only three saves were made. 'Kaboom' to the Shermans


The Tiger and Panther accounted for another Sherman on that flank, taking out the command tank of Captain Redden. The escorting infantry elected to move through the woodland rather than up the road but lost three men to an 88mm shot while crossing the stream. The 2" mortar was quickly deployed and a smoke screen laid.
On the other flank, the final PzIVH was dispatched by the Sherman Firefly and the Canadian infantry started to advance again, clearing the farm in front of them.

Getting ahead of their infantry support the Shermans on the left flank push up into the village.

On the other side the smoke screen has cleared so James elects to do a 'Shoot and Scoot' with his Shermans, he'll have one shot and then bugger off out of sight. The Sherman V shoots at the Panther, it's a hit. Not only that, the 75mm gun throws its eight strike dice and scores five, the Panther rolls its ten defence dice and scores only three; 'Kaboom' again. The Sherman V moves out of the way to give the Firefly a shot at the Tiger, it misses. Everybody shouts, 'Get out of there!' but James elects to take another Aimed shot with the Firefly, 'You fool' we all shout, but he rolls the dice 'DOUBLE SIX!!!!!!' That is fifteen strike dice, the Tiger has a defence of eleven but is still brewed.


On the other flank, one Sherman is knocked out by a PanzerFaust shot from the building it was blithely driving by and another takes some damage from a PanzerShrek.


It was around now that James elected to use his Heroic Leader card, having had his Sherman V destroyed by a PanzerFaust, I give Captain Redden the opportunity of knocking on the door of that house and ordering the Germans to surrender. I tell him that on an 11 or 12 this will be successful. James rolls a 10, a failure, but I tell Mark to put a point of Shock on the Germans due to the sheer audacity of the man. The next card up activates the Sherman platoon and a round of HE sets fire to the building and the Germans are soon retreating.


Canadian Infantry advancing up the hill towards the objective spring a surprise close assault against a German MG42, working out the dice, the Canadians get one dice, the Germans 14, checking the rules there is no fight, the Canadians automatically fall back with six shock. However, the rest of the Canadian Rifle platoon soon see off the MG42.

After four hours play we called it a wrap but had still not fought to a conclusion, the Germans had a couple of platoons of infantry left, pretty much intact. The Canadians though still have five Shermans (one badly damaged) and their infantry although having taken hits was still in fine fettle.

The Germans still hold the crossroads and are the winners, but another concerted effort by the Canadians would likely see them pushed back.

The earlier pictures were all taken by me, here are some photos that James took.


Posted by Paul Scrivens-Smith at 07:48 9 comments:
Email ThisBlogThis!Share to TwitterShare to FacebookShare to Pinterest
Labels: Battle Reports, I Ain't Been Shot Mum, WWII

I cleaned up and assembled the machine-gun teams and stuck them onto tongue depressors. I then spray with Halfords grey primer and once dried give them a wash of black paint with Vallejo Glaze Medium. They are then painted as follows:

This method takes less than 10 minutes per figure and is good for churning the smaller scale stuff out.

I need to give them a spray of matt varnish, but here are some pictures of the finished figures. 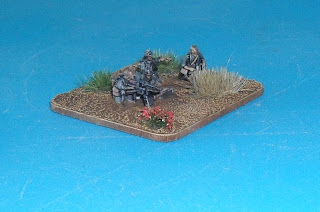 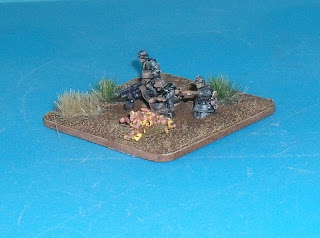 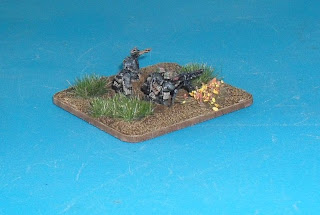 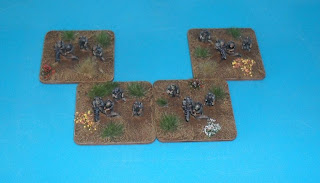 Posted by Paul Scrivens-Smith at 20:28 5 comments:
Email ThisBlogThis!Share to TwitterShare to FacebookShare to Pinterest
Labels: I Ain't Been Shot Mum, Painting, WWII

Tom, James, John and myself had a recent discussion about how well we thought Hail Caesar would work for our big El Cid games.

As we knew it would be a quiet night at the White Hart club we decided that we would take the opportunity to set up a 12ft x 6ft table set up a game of  Almoravid  against a Spanish Christian and Al Andalus force and go at it hammer and tongues.

The forces are from recollection, so there may be a few mistakes.


Ben Yusuf - leadership 8 - one reroll can be used per turn by any one commander in the Almoravid force.

First Command - leadership 8
1 unit of Medium cavalry camel riders (as Hasham Medium Cavalry, but enemy horse cannot charge them on initiative and count as reluctant if trying to charge them.)
2 small units of Light cavalry Berbers

There were deployed as listed from right to left.
James and Tom assisted by Cameron would be the Almohavids.


The Christian Spanish and Al Andalusians


These were deployed as listed from left to right, so each command was pretty much opposite corresponding number.
John and I would be the Christian Spanish and Andalusians assisted by Matt.

How did it play

We were all rather rusty with the rules but the game played out very well. I'll not attempt a full report, but some highlights:

The Almohavid infantry was far superior to the Christians and Andalusians and pushed them back all along the center.
The Christian Knights performed well, as could be expected, but the mounted men of the match were the Medium cavalry camel riders who destroyed both a unit of Caballeros and a unit of Jinetes.


After three hours no command had been broken, the Almohavid infantry were victorious in the centre but the


I forgot to take my camera with me, but did get some snaps on the phone. Expect much better images to appear soon on Toms Toy Soldiers. 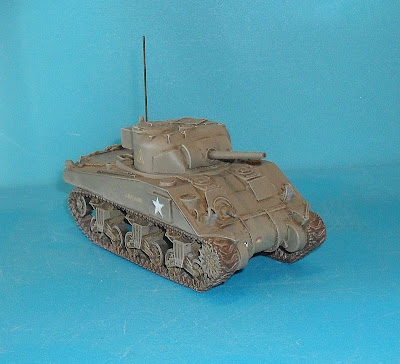 The vehicle was really easy to paint, I did the following:

Here are a few shots of the beast, including an Assault Group 14th Army rifle section to give an idea of scale. 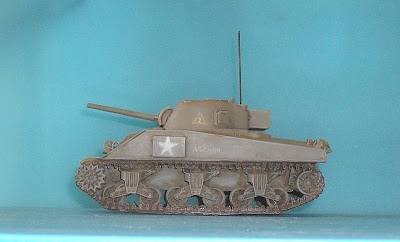 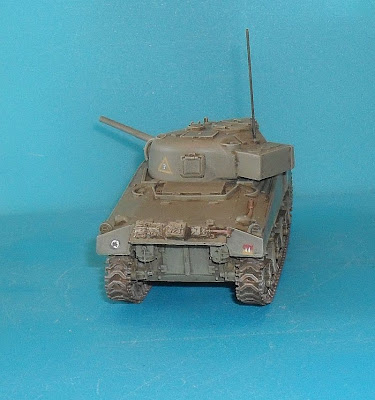 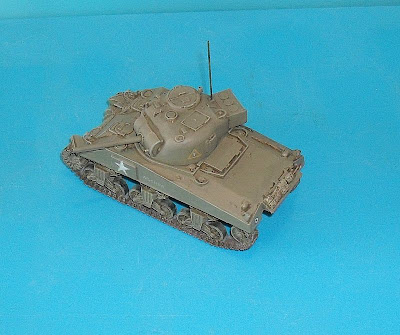 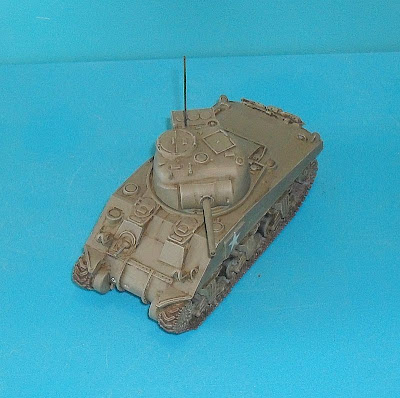 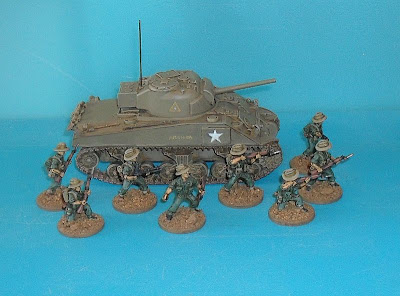 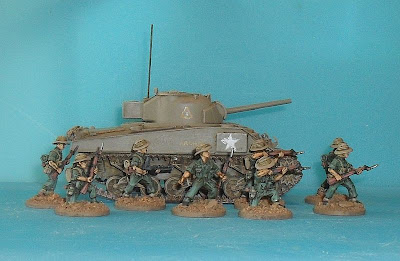 Posted by Paul Scrivens-Smith at 09:52 No comments:
Email ThisBlogThis!Share to TwitterShare to FacebookShare to Pinterest
Labels: BlitzKreig Miniatures, Painting, WWII

Tom and I had a cracking game of Saga on Tuesday at Maelstrom Games.

We randomised the scenario and would be playing the 'Sacred Ground' mission. A hill was placed in the center, Tom placed a wood to the right and I placed some broken ground to the left.

The game started well for the Normans, I established a bastion atop the hill and was driving back any Anglo-Danish troops that ventured near, at one point I was stacking up 36 victory points per turn.Tom eventually secured the rough ground and we both had a unit of Warriors in the woods.

Things were looking good for the Normans who had a comfortable lead, however, the Anglo-Danish Warlord led charge with his Dane-axe armed warriors onto the hill. Although the attack was broken up and the Anglo-Danish Warlord was put to the sword my numbers on the hill were thinned considerably and I was suddenly scoring less points than Tom per turn.

My Sergeants were driven from the woods in disarray so a unit of Knights intervened only to be driven off by a stout shield-wall.

By the end of the game Tom was scoring more points per turn than me and in the end Tom won by 152pts to 144pts.

Tom has also done a report from the Anglo-Danish perspective: http://tomstoysoldiers.blogspot.co.uk/2012/07/the-battle-of-misgewidere-hill-saga.html but of course it is all Saxon propaganda so should be taken with a pinch of salt.