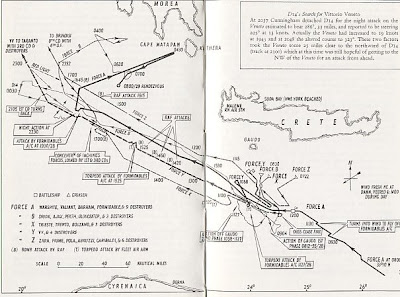 The fleets are as follows:


These represent every ship that you need to recreate the engagement. I usually play General Quarters III now, but these are suitable for use with any set of WWII naval rules.

All the ships are Navwar models and are painted by myself and are based on plywood which has been textures to represent the high seas with Polyfilla.The bottom of the bases are magnetised for easy storage and transportation. The name of the ship is written on the bottom of each base.

For all 52 ships I'm looking for £90.00 including UK recorded postage, if overseas I will do postage via International Signed for at cost.

Make me an offer......
Posted by Paul Scrivens-Smith at 17:09 No comments:
Email ThisBlogThis!Share to TwitterShare to FacebookShare to Pinterest
Labels: For Sale, WWII

This week, I've been slowly working my way through the last few unpainted vehicles and infantry. I've not got as much done as I would have hoped, but have gotten a few stands finished.

All the infantry are Adler and the vehicles are GHQ.

Here are the troops in today's update:

Loads of Blitzkreig Commander troops painted, one of these days, I may actually get a game of it.
Posted by Paul Scrivens-Smith at 14:48 6 comments:
Email ThisBlogThis!Share to TwitterShare to FacebookShare to Pinterest
Labels: BlitzKreig Commander, Painting, WWII

Club Night - I Ain't Been Shot Mum, our first game

Tonight at the White Hart club, James, Mark and myself planned our first game of I Ain't Been Shot Mum from TooFatLardies

We played the first Caen scenario from the rule book book, but as only my Western Desert troops were available we made the following modifications:

1/ To represent the effect of dust and heat haze there would be no good spotting or shooting over 9". Troops over 9" and in cover could only ever be hit on a poor chance.
2/ As the terrain was more western desert than the fields of Normandy and we were using my Indians we put the Allied Rally card in the deck to give the Allied forces a better chance to rally and move across the open.

The terrain was set up with several large hills and areas of rough ground. The DAK were to be defending a walled village.

Myself and Mark played the DAK, James played the Indians, Phil asked to join in so assisted James.

The initial British stonk did quite well. The Germans lost one man dead and three shock in the blind behind the village, the other two hits on that blind were fortunately 'no effect' the section in the rough to the right were on six shock.

The game progressed quite well, as it was our first game we were having to refer to the rules a lot. The Indian suffered though because one blind of theirs was revealed as a dummy and another one on the German left was revealed as an infantry platoon. At this point a lot of the DAK revealed themselves and shot at the revealed platoon. This mean that in the deck the Germans had nearly all their cards, whereas the Indians had only one Platoon, one Big Guy and their Blinds card.

We went through about three tea breaks without seeing the Allied Blinds card, so the revealed Indian platoon got shot up quite badly.

The Allied blinds did eventually get turned over, but by that time they had been reduced quite severely.

In a final action of bravado, one India Platoon bayonet charged the DAK holding the rough ground to the left of the village, but were then cut down in a terrible crossfire, it would all be over and the village would not be held by the Indians.

All in all, a great game that we will definitely be playing again.

Here are some images from the game, all the figures and terrain are from my collection and were painted by me.

Posted by Paul Scrivens-Smith at 08:44 4 comments:
Email ThisBlogThis!Share to TwitterShare to FacebookShare to Pinterest
Labels: Battle Reports, I Ain't Been Shot Mum, WWII

All the vehicles are GHQ and the infantry are Adler

Hopefully, I'll get the chance to play some BlitzKreig Commander with them soon. So many games to play, so little time.
Posted by Paul Scrivens-Smith at 11:33 2 comments:
Email ThisBlogThis!Share to TwitterShare to FacebookShare to Pinterest
Labels: BlitzKreig Commander, Painting, WWII

We arrived back from Cornwall yesterday afternoon and I took the opportunity to put a mixture of Vallejo Pumice Gel and Vallejo US Field Drab onto the bases. This morning I woke up (bloody early as usual) and gave the bases a quick dry brush with Vallejo Dark Sand and stuck on some Woodland Scenics cork bark and some Woodland Scenics Field Grass and a sprinkle of Games Workshop Static Grass.

When the glue was dry I took them out to the garage and gave them a blast of Testors Dull-cote.


Hopefully my work schedule will allow me to get to Maelstrom Games one Tuesday Night in the near future so that I can unleash them.

The Limber is awaiting the delivery of a 60mm x 200mm base from Warbases, I'll get that finished and posted as soon as possible.
Posted by Paul Scrivens-Smith at 11:00 1 comment:
Email ThisBlogThis!Share to TwitterShare to FacebookShare to Pinterest
Labels: Black Powder, Napoleonic, Painting

The holiday painting continues, this morning I finished off eight casualty markers. I've done three as Light Infantry and the other five as Line Infantry Three have also had head swaps to give them Polekom.

When I get home these will be based on the last eight Dial Dude markers that I have. This brings the total of casualty markers up to 20 so should be enough for a good sized game. 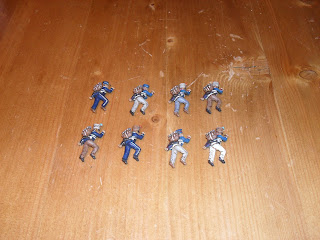 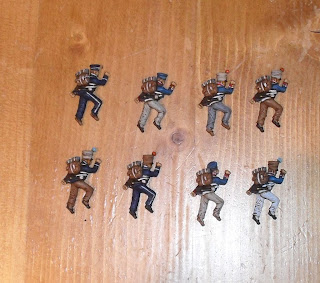 We had a trip into the picturesque harbour town of Padstow today and fortunately Rick Steins chippy was closed so we managed not to have a Rick Stein lunch on top of a Jamie Oliver breakfast - that would have been too decadent.

So, back to the Swallows for a sandwich and some more painting time - hurrah!

I managed to get all the highlights done on the French Limbered artillery piece, I now join Quint in the ability to move my artillery around during our Black Powder games. Like the Hussars, when I get home I'll sort out the base and a coat of varnish.

Now we know the opening hours, we'll give Rick Steins chippy another go later in the week.

Enough cuisine based banter, on to the gun.... 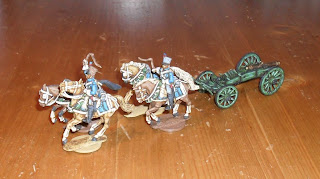 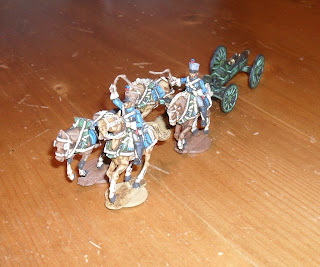 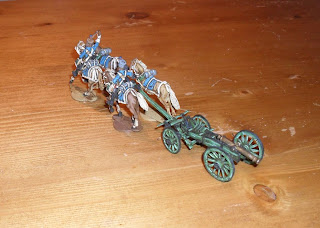 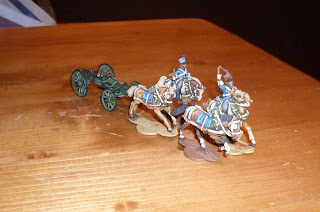