I've had a slow burn 6mm Black Powder AWI project on for a few months and the first few units are now painted and ready for photographing.

I've now got completed the following:


All the figures are 6mm from Adler Miniatures and the bases are from Warbases. The dice holders for the casualty markers are from Mini-bits stuck on a 25mm diameter Warbases base.


Still on the painting table at the moment:

Here is a rough guide to how they were painted (All Vallejo Model Colour):


Posted by Paul Scrivens-Smith at 14:18 No comments:
Email ThisBlogThis!Share to TwitterShare to FacebookShare to Pinterest
Labels: American War of Independence, Black Powder, Painting

It's Mrs Scrivslands* 40th Birthday this week so we are all off to Euro Disney for some fun.

No updates until next week where I hope to get some photos of my newly painted 6mm AWI project uploaded and a report of the next Bag the Hun instalment we are playing on the Tuesday.

*Would that be the Duchess of Scrivsland or is that just too grand?
Posted by Paul Scrivens-Smith at 07:09 No comments:
Email ThisBlogThis!Share to TwitterShare to FacebookShare to Pinterest

A battalion of Regiment de Champagne

After the great Sunday Cake Club Blenheim game I was invited to a few months ago I was determined that I'd turn up to the next game with at least a brigade of standard French infantry painted.

I ordered a battalion deal from Ebor Miniatures and was so impressed with the sculpts that I purchased another three battalions.

Anyhow, other projects got in the way and I've been doing work on these in fits and starts over the past three months.

After a basing session yesterday I managed to get these varnished and photographed today. Looking at the images I think though that I'm going to need at least another spray of matt varnish. 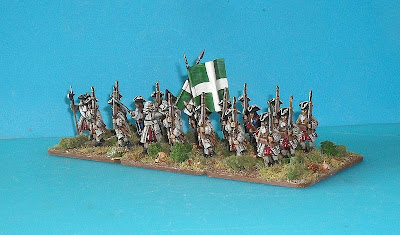 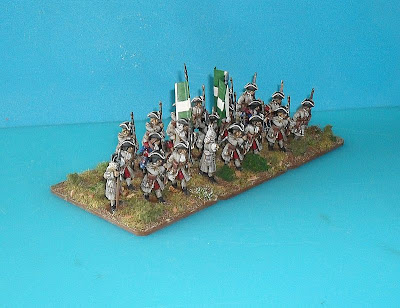 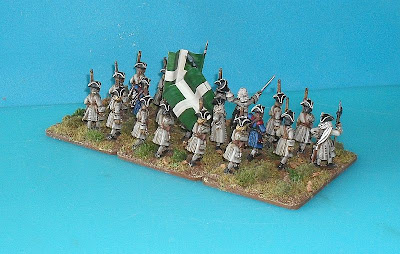 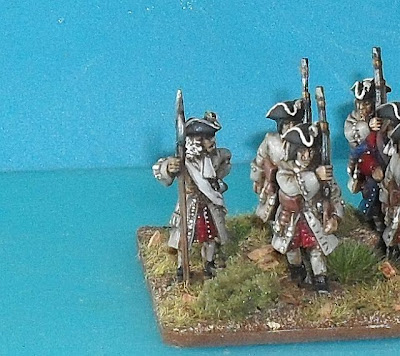 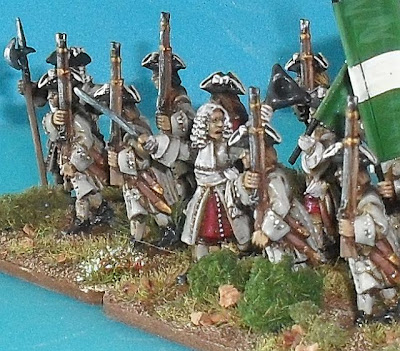 Posted by Paul Scrivens-Smith at 11:34 4 comments:
Email ThisBlogThis!Share to TwitterShare to FacebookShare to Pinterest
Labels: Painting, War of Spanish Succession

A few weeks ago Greg, Ben and myself refought the Battle of Savo Island using General Quarters III, thsi was a resounding victory to the Allied forces.

Having had a couple of games of Naval Thunder last week with Quinton we decided to give the battle another go with these rules.

We used the "Battle of Savo Island" scenario from Bitter Rivals Quinton would use the Japanese while Greg and Ben would take on the Allies. I would generally facilitate and get in the way.

Things started well for the Japanese, they sneaked undetected to within close range of the southern group and let leash. Chicago, Canberra and Patterson were all badly damaged by gunfire with only minor damage  to the Japanese. However subsequently all the ships in the Southern Group turned their guns on Aoba which was raked by effective fire and sunk, but not without the loss of both Chicago and Patterson. Long Lance torpedoes thudded into Canberra and she was also stricken but did cause severe damage to Kinugasa in return.

By now the southern group was reduced to Bagley who was putting up a doomed but game fight. Only a single American torpedo found its mark and that proved to be a dud - damn those magnetic detonators!

The Northern Group was now into the melee, Vincennes took heavy damage in the initial salvo from the Japanese 8" guns, but Kinugasa was delivered the Coupe De Grace. As the engagement drew to a close Vincennes was accounted for and Quincey badly damaged but Kako was also severely damaged in return.

As is likely to be expected one American destroyer - Helm - was sunk by friendly fire in the confusion.

The final state was:

All in all a great game that ended in a draw, a lot better result than the last time when the Americans did far too well.

Sorry for the quality of the photographs, Victoria was using the 'main' camera so I made do with the rubbish iPhone one.

Yesterday evening John and I met up at Maelstrom Games and played a mission we have been planning for a few weeks. We would use Bag the Hun to re-fight the Operation Vengeance mission to take out Japanese Admiral Isoroku Yamamoto.

The Japanese Naval Airforce would field a two Shoktai of three Mitsubishi A6M2 Zero escorting two Mitsubishi G4M2 Betty. The US player would not know which Betty contained the Admiral.
The record sheets are at the end of the post.

We randomised who would take which side and I would be playing the USAAF.

The USAAF were soon into the action sweeping towards the Japanese, Hines scored early long range hits on the first Betty severing the fuel line and setting the bomber aflame. The Betty soon extinguished the flames and limps towards the airport at Buin while the swirling dogfight commences.

The first Shoktai of Zeroes were soon on the tails of Lanphier and Holmes. Lanphier shook off Morisaki but Holmes was unable to shake Tsujinoue. A burst from the Zero ruptured Holmes' fuel line and the P-38 caught fire, Holmes took a sharp dive and the fire was extinguished. Diving, weaving and climing, Holmes was still unable to break away from Tsujinoue who finished off his aircraft. Holmes crashed into the jungle and no parachute was seen.

Having shaken off his tail, Lanphier was soon closing on the second Betty. Lanphier fired a burst into the the Betty but to no effect, the rear gunner on the Betty was much more tenacious although Lanphiers' aircraft did not take significant damage he was still forced to shear away.

Barber takes light damage from the bombers gunners and is also hit by Yoshimi Hidakas Zero but takes no significant damage. Barber gets behind Kenji Yanagiyas Zero and sends a burst through the cockpit, Yanagiya slumps dead over the controls and the Zero crashes into the jungle. Unfortunately, Barbers guns are jammed.

The melee continues, Lanphier  gets onto the tail of the first Betty, but Morisaki gets onto Lanphiers tail. Trying to intervene, Hine gets onto the tail of Morisakis' Zero, and a controlled burst causes the Zero to break up in mid-air. Free off his pursuer, Lanphier presses the fire button and a controlled burst rips through the Betty which explodes in a ball of flame, no chutes are seen.

One of the Bettys is down, but a P-38 is lost, can the other Betty be taken out.

At tree-top height, Hidaka locked onto the tail of Hine and a burst from the Zero took out the starboard engine, struggling to regain control Hines P-38 was forced to crash land in the jungle but he was picked up by natives and made his way back to friendly lines.

Only two P-38 remain to take on the remaining four Zeroes and to take out the remaining Betty. Fortunately the Zeros have been drawn away by the two lost P-38s and the Betty is limping along leaking fuel from the severed fuel line damaged caused by Hine.

Both Lanphier and Barber raced after the final Betty and both were soon on the tail. Lanphiers P-38 took a hit from the tail gunner and lost control of his aircraft shearing off to the port. Barber stayed on the Betty firing rounds into the Betty but causing little damage due to his jammed guns.

Having regained control Lanphier again locks onto the Betty, but like Barber is unable to score a decisive hit. Running out of ammunition, and with the Betty on final approach to Buin airport the P-38s break off and head for home, dodging the scattered Zeroes.

The surviving Betty arrived at Buin, but Yamamoto did not disembark, he had been in the Betty that had exploded over the Bougainville jungle.

Here are some images from the game, the aircraft are all from Tumbling Dice from the collection of John and myself.