Lion Rampant in the Age of El Cid 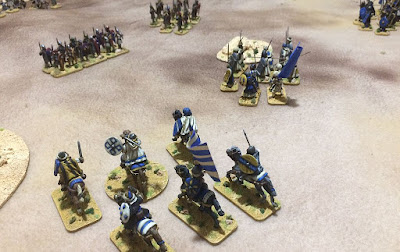 What with cancellations, business trips and vacations I've been on somewhat of a gaming drought this year, sum total so far for the first quarter of 2018 is four games and that is a terrible figure for a me!

I've purchased a copy each of the Osprey rules, Lion Rampant and The Pikeman’s Lament and decided to give them a go using the extensive El Cid collection. Bruce and Sasha came over on Thursday evening and we gave Lion Rampant a go. 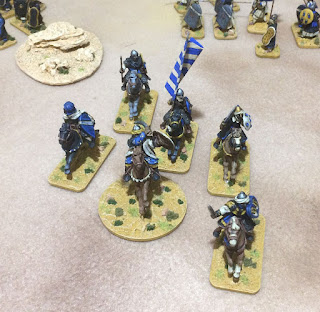 We used the sample Berber and Spanish Christian lists from the book and as advised played the Bloodbath scenario. Dicing for sides, I would be the Spanish while Bruce and Sasha took the Almoravids.

Rolling for our Leader Skills I threw a 4 and got Insipid, probably the worst roll you can get while Sasha threw a Braveheart, I'd be avoiding challenges this game. I did have a bit of luck, as I was the Attacker and the Almoravid force was made entirely of four point units I would deploy all my force after theirs and at least get to put my Leader as far as possible from any potential challenges. 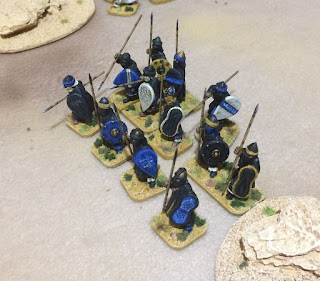 In the early turns I was having some terrible fortune with my order activations, pretty much the entire Berber force would activate and then I'd count myself lucky if a second activation succeeded. It did pull together after a while but I think that my Leader and his Caballeros spent the first eight turns stuck to the table edge.

I'd pushed my foot serjeants (must be mercenaries, I don't think I'd rate contemporary Spanish foot this well) pretty much up the middle of the table to tempt the Black Guard and his Leaders horseman and the bait was took, it was especially gratifying as the serjeants were in Schiltron when fighting the cavalry. 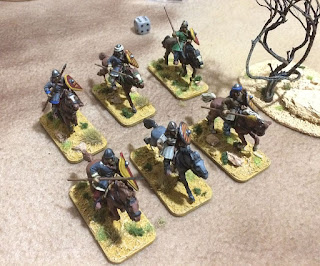 Both Berber units were soon retreating and it was gratifying that they both failed subsequent rally tests, the Black Guard eventually shuffling off the board edge - one rule we got wrong is that we were treating retreats as a full move rather than a half move - the Berber Horse were left with a single model, the Leader.

By this time my Caballeros had gotten moving and were able to mop up a couple of units of Berber spearmen, all the time keeping out a wary eye for 'challenging situations' from the Almorhavid leader. 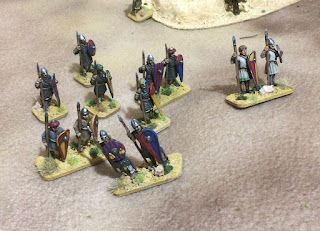 The way the game ended was quite farcical, I'd reduced the entire Berber force down to just their leader, but as I still had five units left we were not rolling for the end of the scenario so I had to just keep trying to move my Leaders unit to keep out of challenge distance while trying to block his single model using my other units and the 3" rule.

Eventually I managed to block him in with a unit of my foot serjeants and finish him off. 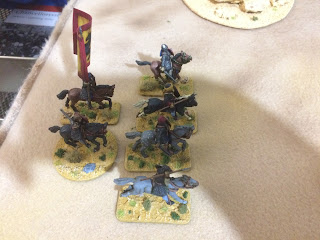 All in all it was an enjoyable game and I was able to get the El Cid collection out for the first time in about a year. But the ending did seem a bit stupid, Al Sasha had lost his entire force but having passed his 'Lost half points' and 'Became last unit from your side on table' he was able to spend about five turns stalking a challenge with my general before I finally did for him.

We need to play some more scenarios, but I wonder if there is enough in these rules to maintain interest over the course of several games. 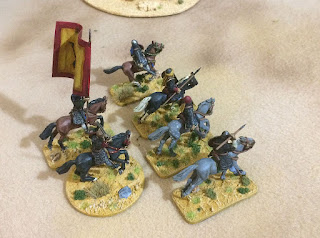 After looking at the photos I've decided my buff cloth looks a bit bland and have spent a few hours gluing patches of static grass and clump foliage to it. 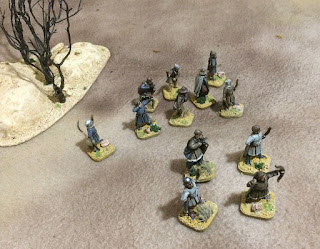 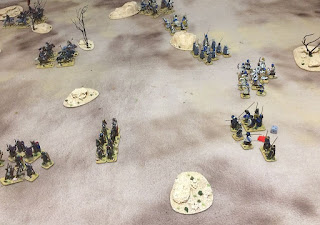 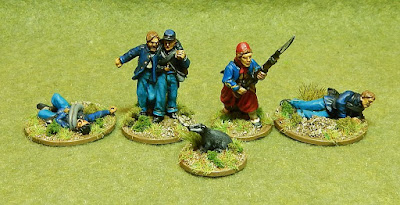 It's a sad state of affairs when you run low on figures to paint for a particular project, but that happened this week when I polished off the last few unpainted figures for the Union faction for the ACW project.

The mix of miscellany was the Union half of a pack of Perry Miniatures ACW Casualties, a Wargames Foundry Zouave that chum Seth gave me and a Warbases badger from Drew - we do live in the Badger State after all, although the American badger is similar to the European badger they are not entirely the same and I did mine as Brock.

The figure drought is over though, I assembled another unit of Union cavalrymen while on vacation and the post from the UK arrived with packages from Warbases and Arcane Scenery in the past few days. 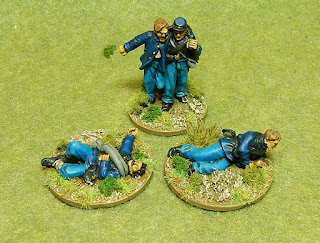 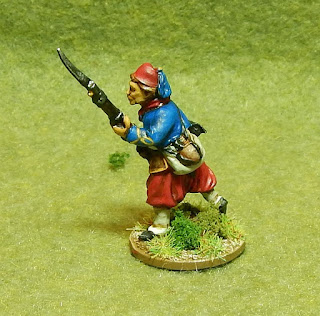 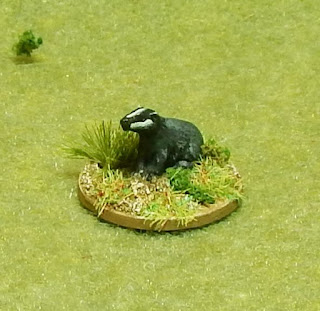 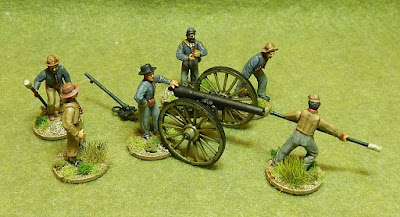 It's been a non-productive couple of weeks, the first first week we were on a vacation in Florida, and although kayaking, manatee viewing and visiting Disney World are great fun they are not conducive to getting any figures painted. Last week I was on a business trip to Georgia and came back with a rotten cold so gaming activities are curtailed.

I did manage to do a bit of figure painting since the last update though. Before I went away I had done the base-coats on a Confederate 3" Rifle from the Perry Miniatures American Civil War Artillery set, so between the vacation and business trip I managed to get the highlights done.

The bases were done this weekend in time for the blog update. I tried not to get too much snot on them :)

The crews are individually mounted and the gun in un-based, allowing me to switch crews with the 12lb Napoleon with a Union crew that I painted back in December.

The vacation was not completely devoid of gaming activities, I did assemble another unit of Union cavalry in Florida and they made it back safely.
Posted by Paul Scrivens-Smith at 16:25 No comments:
Email ThisBlogThis!Share to TwitterShare to FacebookShare to Pinterest
Labels: American Civil War, Painting, Perry Miniatures, Sharp Practice
Newer Posts Older Posts Home
Subscribe to: Posts (Atom)