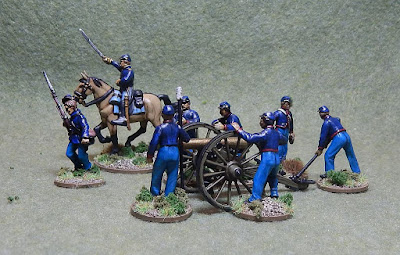 This week I've had a horrible cold so have not had a lot of motivation to paint, but I have managed to get a few more pieces finished for the American Civil War Sharp Practice collection.

Firstly a 12lb Napoleon made up from the Perry Miniatures American Civil War Artillery 1861-65 set that I bought from Arcane Scenery a few weeks ago. I split a box with chum Drew, he took a gun for his in-progress Union forces and I'll eventually do one for my Confederates, 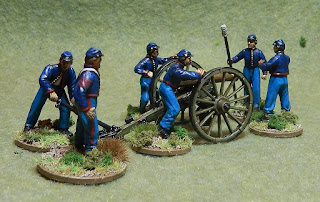 The kit goes together very well and you can build it in several options, for this one I chose to have a 12lb Napoleon smooth-bore and have crew relaying the gun in preparation for the next shot. I attached the bucket that came with the gun under the carriage with a length of jewellery chain. The gun is supposed to be an olive-grey colour, but I'm not sure if I quite got the colour right, 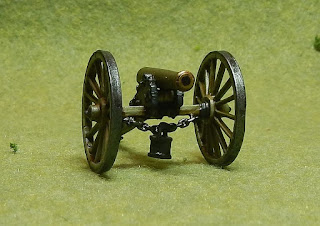 After painting, I realised that to make him fit snugly against the wheel I would have to clip a section from the gunner on the lefts base. I did the gunnery sergeant on a larger 25mm base as I have with all my leaders for Sharp Practice.

I've also painted up a new leader to go with the cavalry group that I painted last week. This chap is made of components from the Perry American Civil War Cavalry set used previously. He is accompanied by the first figure that I painted from the ACW23 Casualties pack and I'll add a few more as I go along. 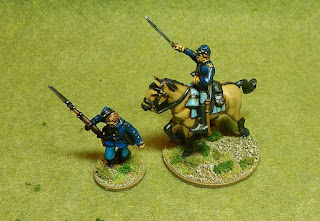 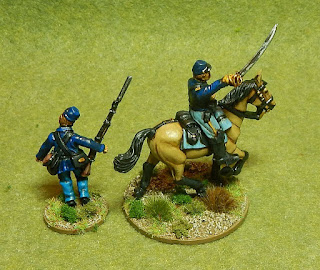 After this weeks low progress I hope to use my time off over the holiday season to crack on with some Confederate cavalry and some dismounted Union Cavalry.

Posted by Paul Scrivens-Smith at 08:09