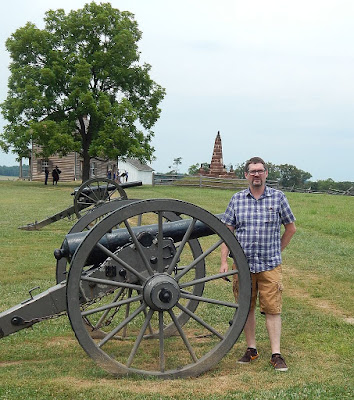 Following on from the visit to Gettysburg and Historicon we headed south crossing into Virginia for an overnight in Manassas.

Arriving in town on a hot, humid Sunday in mid-July you got a feeling what the similar conditions were like for the battle. Not wanting to over-exert we decided to take a shorter circuit just along Henry House Hill crossing over to the Robinson house and back to the visitors centre.

Being a wargamer I wanted to take some photos of the fencing, so here is a collection. 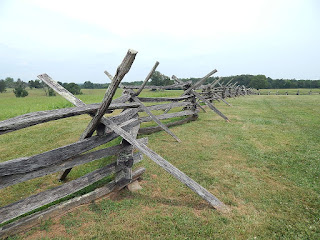 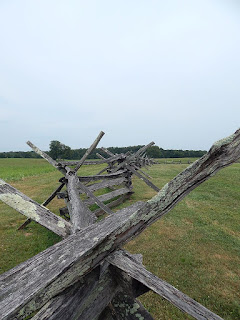 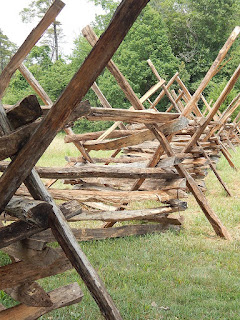 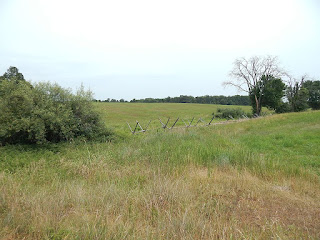 Posted by Paul Scrivens-Smith at 19:02 No comments:
Email ThisBlogThis!Share to TwitterShare to FacebookShare to Pinterest
Labels: American Civil War, Manassas, On Tour 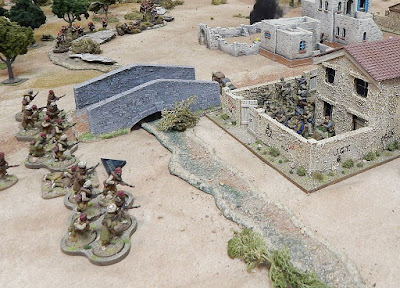 Ed, the team from Chitown Wargamers and myself ran a Spanish Civil War game at the recent Historicon event.

The action was loosely based around the Republican rear-guard actions around important road junction in the the town of Maqeda in September 1936 following the unsuccessful Republican attacks on Talavera.

The Nationalist forces would comprise of five platoons, two of Falange, one of La Legion and one of Regulares - all from my collection, and one of Carlists from Phils collection.

I somewhat assisted Ed with the setting up of the table, the terrain was all from his and my own collections. The outskirts of the town were surrounded by woodlands and orchards, with a small stream. 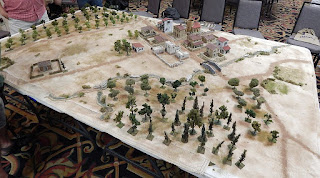 I would corral the Republican team while Phil would assist the Nationalists while Mark and Ed kept things moving along. 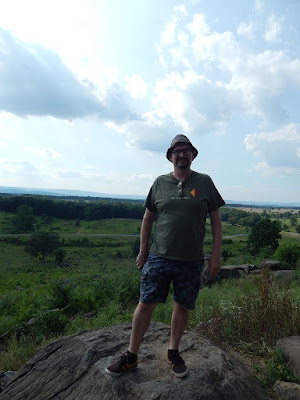 A couple of weeks ago Victoria and I were fortunate in being able to visit the town of Gettysburg in Pennsylvania. After a great evening out in the town we retired to our lovely AirBnb for a good nights sleep before our exploration of the battlefield the next day.

Firstly we spent a couple of hours in the Gettysburg National Military Park visitor centre where we first saw the short film explaining the background of the battle, before then viewing the spectacular Cyclorama. This is an immersive 360 painting of the climatic Pickett's Charge phase of the battle that is brilliantly presented, in places it is hard to see where the 3D diorama ends and the painting begins. 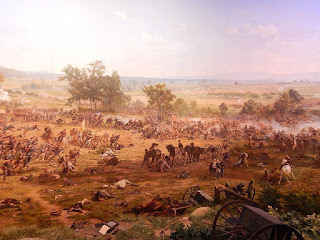 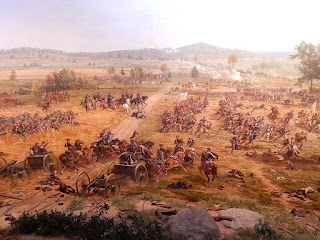 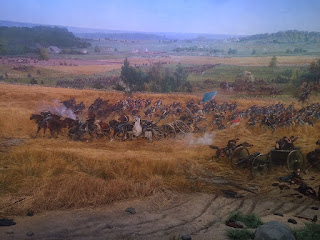 After the Cyclorama we then spent another hour or so browsing the museum, I could have spent a lot longer but Victoria appreciates it if I don't read every display board.

We then started our tour, rather than travelling the battlefield in a group Victoria had booked a special treat for me and arranged a personal guide, Bill Trelease who will drive your car around the battlefield for a couple of hours giving you a tour of the battlefield.

We first headed out of town to the north west where we walked the site of the initial action where Burfords Union troop delayed the initial advance of Hill and then the further actions as more troops were fed in. 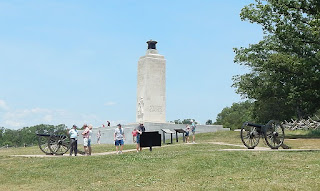 We then headed along Seminary ridge, past the old Seminary. 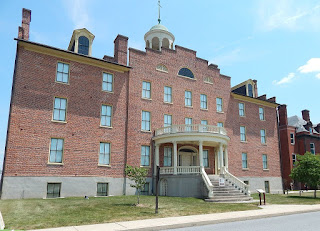 Stopping off at the Longstreet memorial and looking over the ground where the attacks of the second day towards the Union lines were launched. 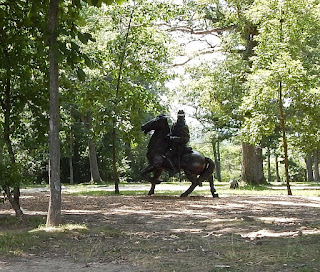 In this shot you can see the monument on Little Round Top in the distance. 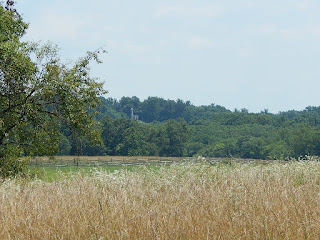 We then circled round towards the Peach Orchard. 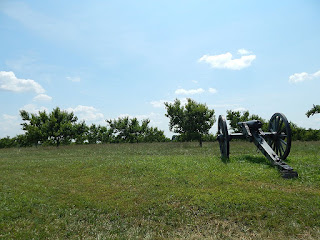 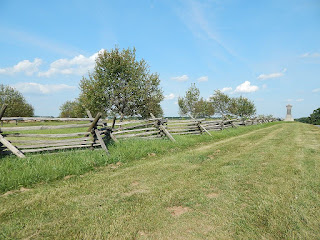 Then on to the Wheatfield where it is said you could not take four paces without stepping on a body on the 2nd July 1863. 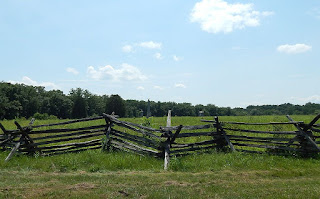 Bill then drove us up to the summit of Little Round Top where we had a great view of the surrounding area. 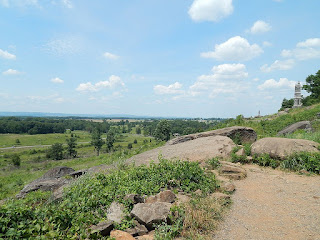 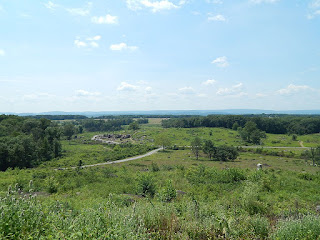 The last stage of the tour was to visit the high water mark of the Confederate advance on the third day of the battle, this image shows a section of the wall along 'The Angle' 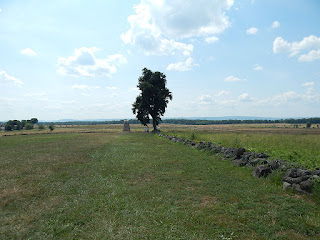 Bill then dropped us back at the visitor centre where we picked up some cold drinks, it was definitely a hot day, and then bought some books and souvenirs from the books-shop on site. 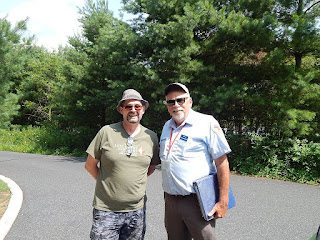 Victoria and I then drove back around the battle field stopping off at some more of the locations. 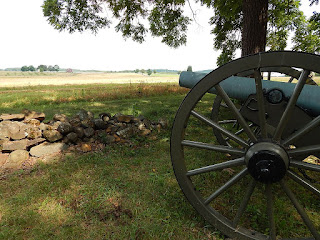 We climbed the Longstreet Tower for some great views of the sight of much of the action on the 2nd and 3rd days of the battle. 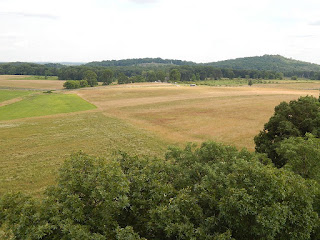 We completed our tour with a circuit of The Devils Den, Little Round Top, The Peach Orchard and The Wheatfield before heading out for our onwards journey. 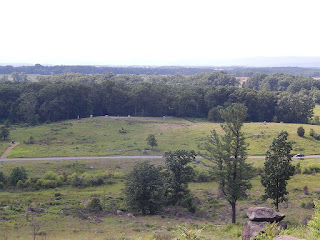 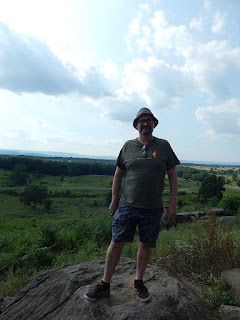 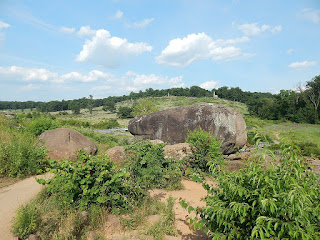