If you came here because you followed a link from TMP, you have been duped. Tango01 does not exist, he is a sock puppet account of TMP Editor and the post you followed was just a pathetic attempt to drive traffic to the cesspit that is TMP by using SEO. Don't support TMP it steals content.

Just before we went on our trip to the UK last month I noticed that on the Northstar Twitter feed that Crusader Miniatures had released some lovely Senegalese Tirailleurs in their early WWII French range. I did not know why I needed to have them but I did know that I had to have them.

I picked up the platoon deal, and as that is not quite enough to do a full platoon for Chain of Command I also picked up a few more troops and a few support weapons.

I initially concentrated on getting a full platoon painted for Chain of Command and the support weapons will follow in later posts.

The painting was done using the Crusader Miniatures guide by Michael Farnworth as a guide for my usual base-coat, was, two or three highlights method. I painted these in groups of four figures. All colours are Vallejo Model Colour unless noted.

Once dried I gave the figure a coat of Army Painter strong tone.

Once the Strong Tone has dried I went about highlighting the figure. Brown Violet, Russian Green, Flat Earth and Saddle Brown are initially repainted with the base coat, then two highlights each with a little more Iraqi Sand added. The German Camo Beige is repainted with the base-coat then a couple more highlights of Pale Sand added. The Chocolate Brown on the flesh is just re-painted while Chocolate Brown rifle stocks are highlighted by adding Beige Brown. The Viking Red is repainted then given a wash of Army Painter Red Tone to dull it down. The metalwork is picked out with a glaze of Gunmetal Grey and Black. Each figure is then 'brown-lined' with Windsor & Newton Peat Brown.

Here are some shots of the constituent parts of the platoon. 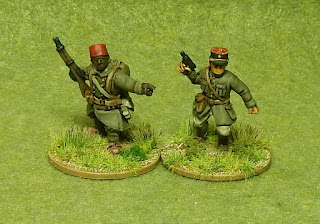 The Sergeant-Chef is a head-swap on one of the figures from the French Infantry Command pack, while the office is the one from the platoon deal. The Lieutenants Kepi is initially painted black and then glazed with Black and Dark Prussian Blue. The braid is picked out in Gold Brown. 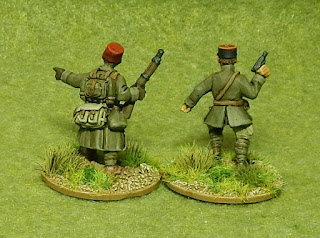 I base the leaders on 30mm bases while the troops are on 25mm bases, the LMG team and one pair of riflemen per section are based on a 40mm base.

I'm not too sure about the colour of the small packs, I think they are probably a bit too light and I should have started with a greener and darker base-coat than German Camo Beige, probably Khaki or WWII Russian Uniform.

The bases are done using Pumice Gel with small patches of coarse sand stuck on then base coated in US Field Drab with a drybrush of Iraqi Sand then Pale Sand. I then repaint the edge with US Field Drab to tidy them up then add Army Painter tufts, Woodland Scenics clumps and static grass.

The last troops are the V-B rifle-grenadier team led by a Caporal.

I'm looking forwards to playing with these. I don't have any Germans painted specifically for 1940 in France, but my early Eastern Front troops should suffice.

Expanding a Soviet bridgehead in the Don Bend 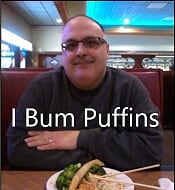 If you came here because you followed a link from TMP, you have been duped. Tango01 does not exist, he is a sock puppet account of TMP Editor and the post you followed was just a pathetic attempt to drive traffic to the cesspit that is TMP by using SEO.
Don't support TMP it steals content. 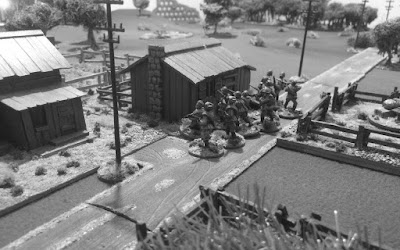 Thursday evening Drew and I had another game of Chain of Command set on the River Don during the 1942 Stalingrad Campaign, Fall Blau.

In this game the Soviets are attempting to widen their bridgehead over the Don and we represented the action by using the Blitzkreig mission from the 1940 book. Again Drew would play the Soviets and myself the Germans. 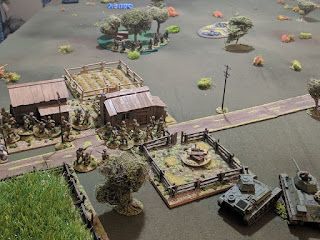 With 13 points of Force Support available Drew picked a T-34, a T-70, a mine clearing team and a wire cutting team. With the mission rules, I was hardly likely to see them, but I picked a tripod MG-34 and a Sniper.

The jump-off points were laid out as per the picture below. It does not show so well in the images, but the majority of the terrain is rolling grasslands with lots of small hills. 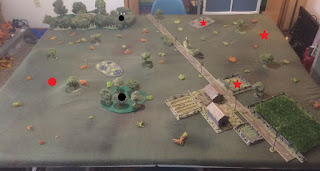 We would both start with Force Morale 9. Rolling off for who went first, it would be my Germans, but I elected to do nothing.

The Soviets made their first roll and..... 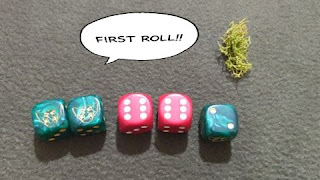 Four sixes! rolling on the Random Event table it would be heavy rain which is very apt as looking out of the window it was persisting it down...... 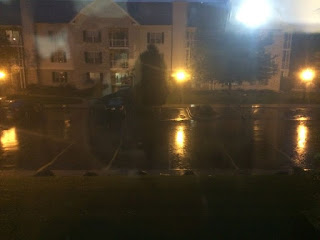 Years ago I bought a weather dice, so duly fetched it out and used it as a reminder that visibility was now only 18" and we would need to roll again at the end of the turn. 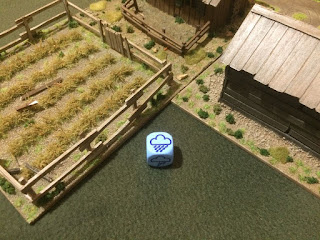 The Soviets started to appear, massing their forces in a small farm on their left flank. 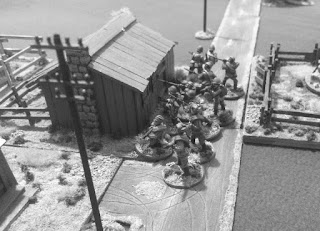 I did not want to get caught in a rush, so I deployed a section on overwatch in a wood facing them ready for either the rain to clear or them to become visible. 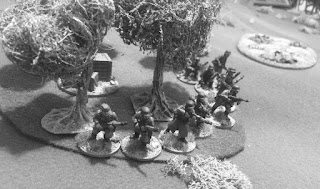 The infantry in the village started to filter forwards and the armoured support was now moving up. Fortunately the heavy rain masked my troops. 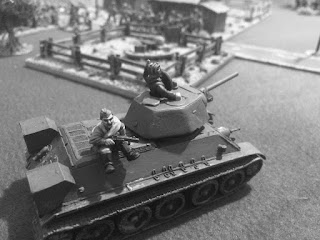 The Soviet infantry started to be visible in the rain and my section started pouring fire onto them, it was only a handful of casualties and a little shock but a start nevertheless. 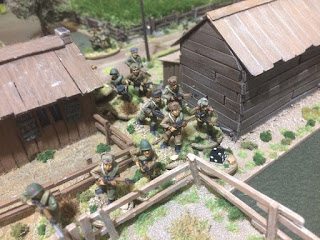 By now though the tanks were coming into tanks and although the initial fire was ineffective I knew this situation would not last. It was at this time the turn ended and the rain cleared. 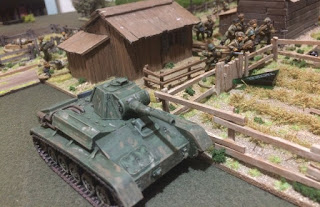 My Grenadiers were engaged in a overwhelming struggle against the advancing hordes and although their fire was very effective they could not hold against the tanks. The first German casualties happened a blast from the T-34 killed two men, unfortunately one was my section leader. Unable to manage shock on this section this was going to go badly! 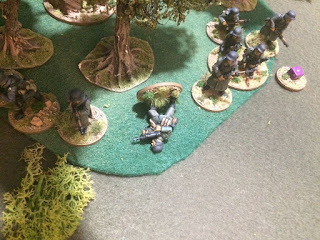 Hoping to take some pressure off I deployed another section in the woods on my left and they were having a ripping rime firing down the road at the Soviets in the village before the T-34 blocked their line of fire.

My Feldwebel deployed with the troops in the wood to attempt to stabilise the situation, but having analysing the situation found he needed to be somewhere else so rallied a little shock and buggered of out of there before the situation became to dire. 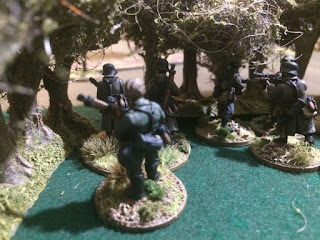 With the T-34 blocking my shots into the village, my section deployed on the left was out of targets, for reasons unbeknown, Drew deployed a section in the rough ground, my Grenadiers redeployed and were soon ripping into them, killing the Junior Sergeant and piling on the Shock until they broke. 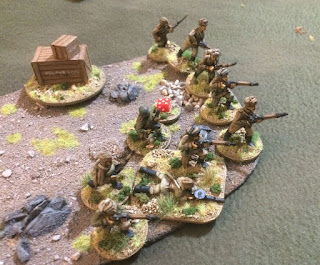 It was all for nought though, as expected my section on the right was broken, a double move followed by the end of turn saw my jump-off in the woods captured, the other one on that flank denied to me and my Feldwebel shot down. With a clear route to the table edge the Soviets saw their chance and made their strike to the table edge winning the game. 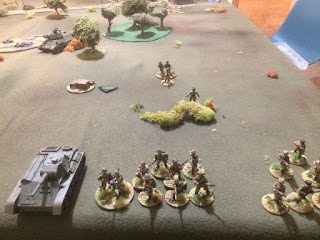 I'd lost one complete section and my Feldwebel, the Soviets were down about 20 men. The Blitzkrieg scenario is a bugger if your force doesn't have any integral anti-tank and your opponent has some armour. In retrospective I should not have bothered spending my support on troops and bought instead barbed wire, minefields and entrenchments.

If playing as a campaign I would have likely buggered off after killing a few Soviets having taken no losses of my own.

Another eight of those lovely resin casualty markers from 1st Corps, this time a pack of the German ones. These are probably a bit too 'late war' for the current early/mid-war projects I am working on but nevertheless are a useful addition to the collection and will be used as pinned markers in our Chain of Command games/

I also picked up a pack of telegraph poles from the local model railway shop, these were based, sprayed brown and had the cross-pieces picked out in a rusty steel and the 'pots' painted as porcelain. 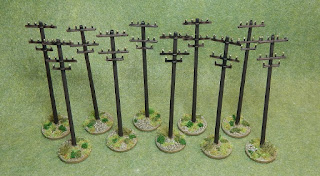 But they are a little small, and yesterday I saw on Tamsins blog that Rubicon did a more appropriate 'utility and light pole' set so I placed an order for some yesterday, but these will do in the meanwhile and they already had some use as you can see in some of the pictures of Wednesdays game.

Action in the Don Bend I've been painting WWII Soviets and Germans for Chain of Command for a couple of years now and in that time I've managed one game with them and that was about 30 months ago. Something had to be done.

This past couple of weeks I've painted a T-70, some more Germans and some Soviet casualties, so it was time to get a game in.

Using the 1942 lists available in the Chain of Command Facebook group I would use a 1942 German Grenadier platoon while Drew had a full strength Soviet Rifle platoon. My Germans would be attacking in the Hasty Defence scenario from the Blitzkreig 1940 supplement.


After the Patrol Phase the jump-off points are shown on the shot above, Soviets marked in red stars, Germans with black dots, the jump-off at the top would give me a good opportunity to exit a team from the Soviet board edge.

In support I had an adjutant, an anti-tank rifle, a tripod MG-34, a sniper and a Panzer IIIJ while the Soviets fielded supports of a flamethrower, a 5cm mortar and a T-70.

Trying to fulfill the first of my objectives I had a double-six so deployed rushed my anti-tank rifle team from the jump-off towards the Soviet table edge, the team took a little fire killing one man but they were soon safe in the lee of  a hill.


The Soviets started to move to block my advances and a sharp firefight ensued, supported by the Panzer III the Germans initially had the upper hand, but I then became focused on taking out the T-70 and the Soviet fire began to tell on my troops and soon grenadiers were being thinned out.

A 5cm mortar round landed on my medium machine-gun and knocked out the Feldwebel commanding that so even less supporting fire became available for the grenadiers.


The telling blow came when the Oberfeldwebel was killed stone dead in an exchange of fire with the Soviet infantry, unable to manage shock and with the ranks thinned the Germans were either pinned in place or breaking to the rear.

With my force morale collapsed the Soviets were left in charge of the battlefield.

I think I need to relearn the lessons of this game.