Quinton asked if I would paint him a platoon of the new Perry Miniatures AfrikaKorps I was 'between boxes' on the vast quantity of Desert Rats that I need to get painted in time for Salute, so it only took a little arm twisting. 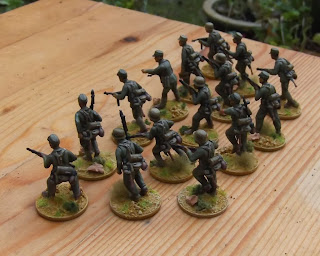 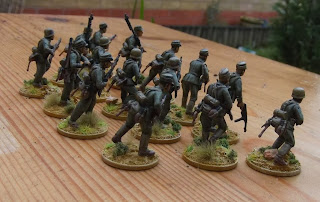 I received a box of Perry Miniatures Desert Rats from my parents for Christmas, along with a couple of 3" mortars, a couple of Vickers machine guns and a pack of small-packs. On Boxing Day I got these all assembled and given a coat of primer. 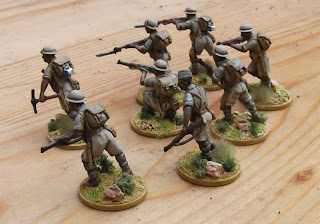 Enthused by our game of I Ain't Been Shot Mum on Saturday, I came home and made a start on eight of the Desert Rats infantry and finished off the bases yesterday evening.

These were painted in my standard method, that can be found here. 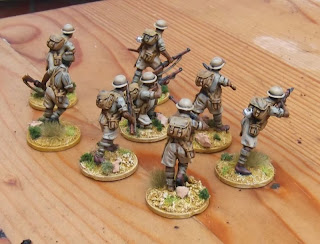 On Saturday we had our clubs Christmas gaming day. It was a great opportunity for James Morris to try out the I Ain't Been Shot Mum rules and terrain for the game we will be taking around the shows this year, the first outing will be at Salute in April where we will unveil the full thing.

Without any further ado, on to our game which was:

This attack took place on the evening of 10th February 1941

I have uploaded the Orders of Battle here James put together a brilliant scenario that really played out well.

We played without blinds, the Italian troops were hidden, but their 'platoon' and 'big man' cards were placed in the deck and they could be revealed when their card came up, this prevented the issue often seen in asymmetrical games of I Ain't Been Shot Mum when one side has nearly every card in the deck and the other ones blind turns up as frequently as the Tea Break card.

James would play the Italians and I had the Indians, to be assisted by Steve when he arrived around lunch-time.

The initial 'Stonk' was quite devastating on the Askaris and they were carrying a lot of shock markers when the Indians had spotted them, in the ensuing fire-fights and bayonet-work they were soon dislodged.

The game turned into a race between the British to get to the top. In the centre, Lieutenant Gibbs led one of the platoons about half way up the slope successfully dislodging a platoon of Askaris but taking heavy casualties in the process and also causing the Italians to abandon their mountain gun. On the left flank Sergeant Shaw had led one platoon to almost the top of the peak, easily brushing aside a platoon of Askaris, but his supporting platoon was making poor headway against the steep slope of Brig's Peak so leaving the platoon he scrambled back down the slope to try to lead the supporting platoon up a better path.

Italian mortar fire opened up and managed to knock out one of the 2" mortars supporting the Indian attack, but caused very little other damage, the Indian 3" mortars were similarly ineffective.

On the right flank Subedar Johal led his platoon in a bayonet charge to almost the crest, but was cruelly cut down by fire from the Italian Bersaglieri. Lieutenant Gibbs switched from the centre to the right flank and drove the supporting platoon onwards towards the Bersaglieri on the heights.

We were now running low on time, and it was time to wrap up. The Indians had lost a 2" mortar and had two platoons down to minimum activations, the Italians had lost all their Askaris and held the ridge line with a couple of shaky platoons of Bersaglieri. I reckon another couple of turns would have had the Italians dislodged.

A great game, that turned from a battle against the Italians into more of a quest between myself and Steve as to who could get their troops to the top first.

The Indians are all from my collection and the Italians from that of James. James made the terrain with a very little assistance from myself.


Posted by Paul Scrivens-Smith at 13:10 12 comments:
Email ThisBlogThis!Share to TwitterShare to FacebookShare to Pinterest
Labels: Battle of Keren, Battle Reports, I Ain't Been Shot Mum, WWII

I have had these on the painting table, cleaned up and sprayed white for over a year. Over the last couple of weeks I splashed a bit of paint on them and did the bases. These will join the already extensive collection of 1/285 scale Western Desert stuff that does not get played with nearly enough!

Al the vehicles are from GHQ and the infantry and gun crews from Adler Miniatures.

Here are some close ups of the figures.

In the absence of a festive message from Scrivsland I over the weekend I have painted up a pair of donkeys - manufacturer unknown - donated by James Morris.

These will server double duty, acting as pack mules for my 1941 East Africa campaign Indians and as baggage for my El Cid Almohavids.

Enjoy the donkeys and I hope Santa brings you lots of new toys. 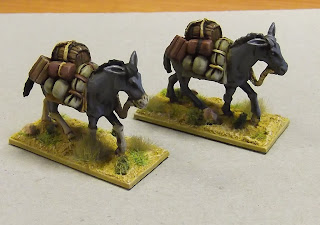 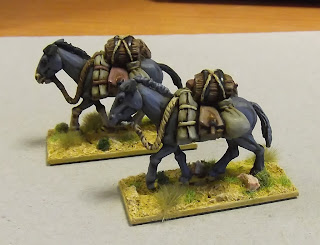 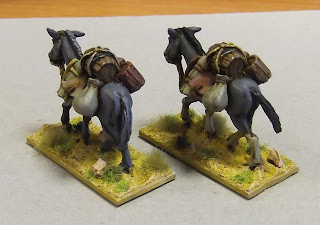 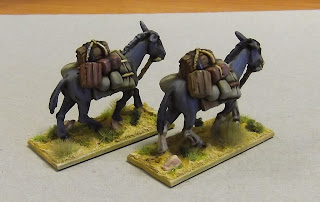 Yesterday evening Phil and I had my first game of Bolt Action in many a month. Phil has got his Americans painted so lacking any ETO troops of my own, I picked a 750pt force from the new Armies of Imperial Japan supplement that was swiftly supplied by Arcane Scenery.

I went for a pretty vanilla Japanese infantry force: 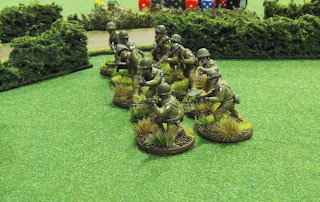 I would have nine dice in the pot and Phil would have ten. We set the table up with some good line of site blocking terrain and then rolled up a mission - "Hold Until Relieved" so one of the buildings was moved to the centre of the table to represent the objective.

The game kicked off with a pre-game dash by the Rangers.

The initial turn passed rather uneventfully, but the US Air observer called in his first air-strike on the unit holding the objective. Turn two, the Thunderbolts screamed in and straffed the US Mortar team, destroying it and causing all the surrounding units to hit the deck! To add to their woes, the Japanese sniper took out the Ranger NCO with a single shot. Not to be daunted the US air liaison team called in another strike on the defenders.

By this time the Japanese reinforcements were heading towards the objective, but one of the squads was caught in the open and shot up rather badly. The pins were racking up on both sides, and the US attack went through a period of stagnation when a lot of the troops were unable to be motivated to get on with their jobs.

A Boston screamed out of the clouds and was much more effective than the earlier Thunderbolt. The Japanese defenders dived for cover, but despite their defensive measures, a third of the section in the building were wiped out by the devastating attack. Desultory fire by the sluggish US infantry also accounted for a couple more.

As they were being thinned out by the continued US fire, the Japanese attempted to drive the attackers away at bayonet point. The first Banzai force was farcical, two troops fell to long range SMG fire from the US platoon Sergeant and the outnumbered US squad not only won the initial clash, but killed off all the attackers. A second bayonet charge was much more successful in driving back the American attacks on my left flank, but things were coming to a head.

A US charge on the house was driven off, but with severe casualties so when another US squad came in we were unable to drive them off. As darkness fell, neither side was in clear possession of the objective.

My first game of Bolt Action in many a month, but despite the rustiness with the rules we both had a good time. I hope to get another game in with Phil in the New Year.

I was happily ploughing my way through painting my Desert Rats when buddy Quinton turned up at my house with a few boxes of Perry Miniatures Afrikakorps. 'Would I like to have a go at painting some', 'Oh no, I am far too busy!'

Anyway, I've got all the Desert Rats painted so I thought I would give these a go.

Anyway, here are the first ten, still stuck on their temporary, for the purpose of painting, tongue depressors.

SOLD
Having not played it for several years, I've decided that Flames of War is no longer for me so alongside the recently listed PanzerKompanie, I'm also selling my United States Parachute Rifle Company. 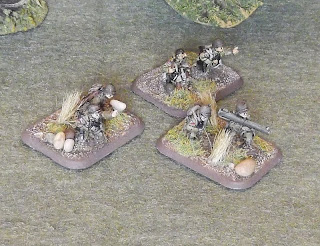 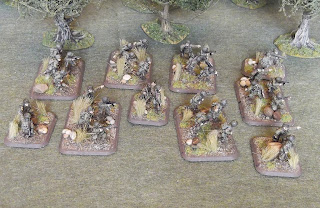 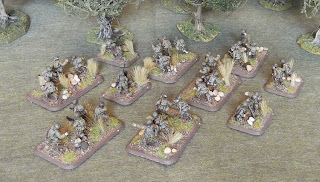 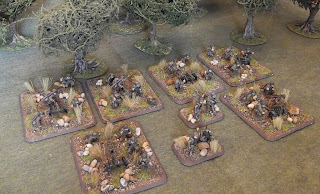 Here are some group shots: 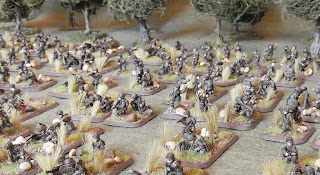 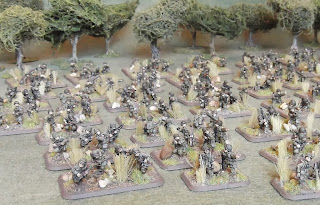 Here are some extreme close-ups showing the 'Stars and Stripes' that I insanely painted on these. 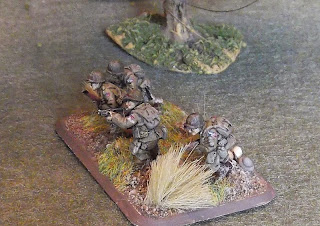 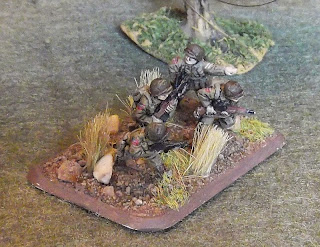 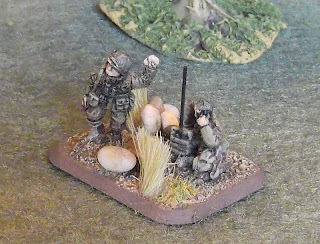 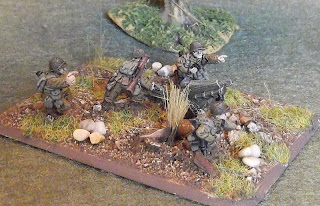 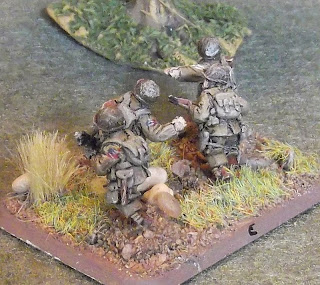 I am looking for £330.00 including UK delivery, overseas delivery at cost. If you are interested contact me via email at smith.paul18@sky.com

I'll also do a deal for both this and the PanzerKompanie if you are interested.