Like the previous batch these are all Artizan Designs picked up from Northstar. 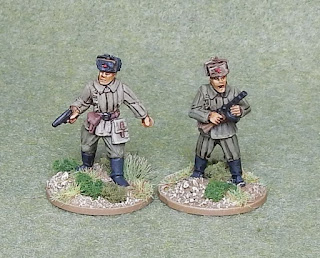 The first pair of figures are from the Command pack, and although a little smaller than the standard infantry are really good characterful sculpts that mix well with the troops. 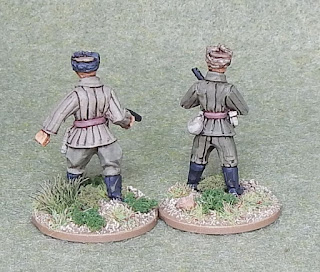 Two more sections of SWWB08 - Soviet Army Squad II were also completed so I now have a complete 'winterised' platoon in fur hats and padded jackets.

Continuing to use my standard WWII Soviet palette, most of the uniform colours in this batch were 'Russian Uniform' and 'Khaki' with rather less 'US Field Drab' 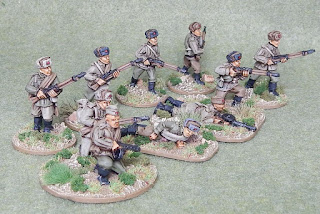 I'm rather happy with the effect of having the mix of uniform colours.

This time I did not mount all the LMG teams as prone pairs, instead using some kneeling figures on the bases so that I have some variety, the 'spare' prone figures shall be mixed in with gun crews.

I now have enough Soviets painted for three platoons plus a bucket load of supports, I have some more of the old Bolt Action Miniatures Soviets on the painting table at the moment, but once those are complete I had better get cracking with some more Germans. 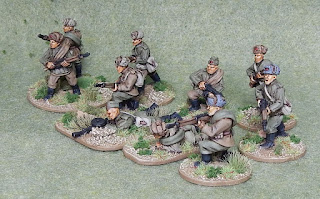 I've no business trips scheduled now for the foreseeable future so the painting should be able to continue apace, at least until my trip to the UK in August.