These will be the last newly painted figures of 2014.

A good few years ago a few of us had some great games of Cold War Commander. I painted up US Army and Soviets for a fictional 1980's conflict as well as an extensive collection for the Iran-Iraq War of the same time period.

About three years ago, Mick and I played a 1967 campaign with Mick using his Israelis and myself using my Iranians and Iraqis as their Arab adversaries. Mick and I have scheduled another game of Cold War Commander early next month so I took the opportunity to paint up some of the stuff I already had, a cheeky little order  of my own to Heroics and Ros, plus a stocking filler from my wife Victoria who also purchased me some Heroics and Ros goodies.

They are Army Painter Desert Yellow, Vallejo Beige Brown for the camouflage patterns, Black for the tracks and a quick dry-brush with Pale Sand. I then washed with Sepia Wash mixed with Glaze Medium.

The bases are US Tan Earth dry-brushed with Iraqi Sand and then Pale Sand.

First of all I found the other three GHQ T-10M to go with those I painted earlier in the month.

These are 10 H&R T54 that Victoria bought for me, the command base has a BRDM-2

Five H&R T-72 from Victoria, I used Chocolate Brown camouflage for these as I wanted a deeper contrast. 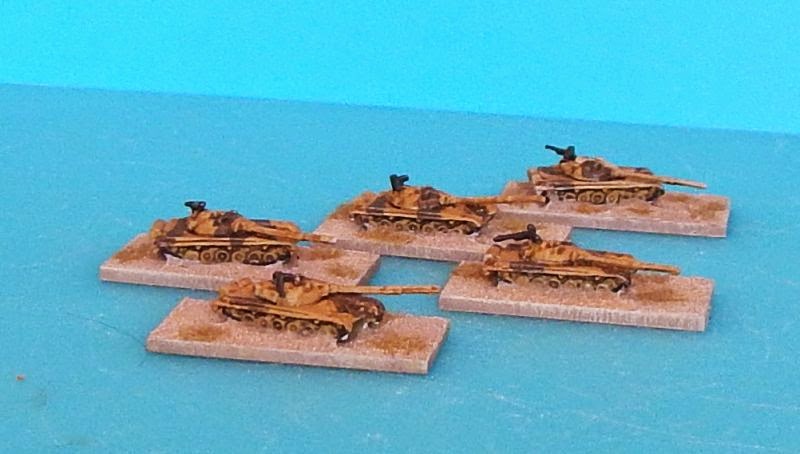 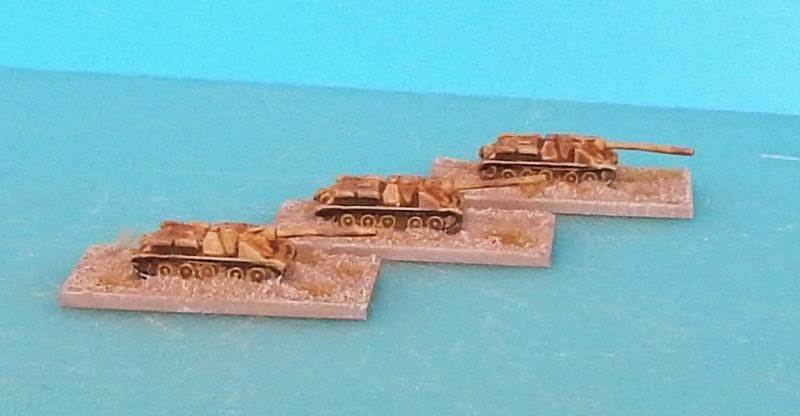 Some recce elements, three BRDM1 and a pair of GAZ67 jeeps, one with a spare 14.5mm HMG added.

Here is a shot of the lot

Posted by Paul Scrivens-Smith at 15:11 No comments:
Email ThisBlogThis!Share to TwitterShare to FacebookShare to Pinterest
Labels: Cold War Commander, Painting

Updated with a great banner done by Mog - who I think needs a career change to graphic designer :)

This evening James, Steve, Tom and myself had an end of year blow-out with a big El Cid game representing the Battle of Bairén in 1097, two years before El Cids' death.

El Cid and King Pedro of Aragon are advancing along the coast around Gandia while the Almohavids hold the high ground. The Christains are also harassed by fire from the Berber fleet.

The Moors had three large infantry commands and one command of six light horse.

All the commanders were rated as eights apart from El Cid who was a nine.

On the Christian right Pedro pushed against the Moors on the high ground but was gravely wounded leading a charge of the Caballeros, although the Moors on that flank were broken.

The centre became a real mess, the battle swayed wildly with units failing break tests and disappearing on both sides. However, the Christians prevailed apart from in the very centre. One Berber unit broke through the line and El Cid turned his command around to counter the threat. Charging at the head of his Hildagos he hoped to sweep away this impudent Berber unit, however, after four rounds of combat El Cid was dead and his bodyguard sorely shaken!

By this time though three of the Almohavid commands had been broken and the field belonged to the Christians. However, El Cid was dead and King Pedro was gravely wounded.

The figures are from the collections of James, Tom and myself.

Here are a load of photos from the game 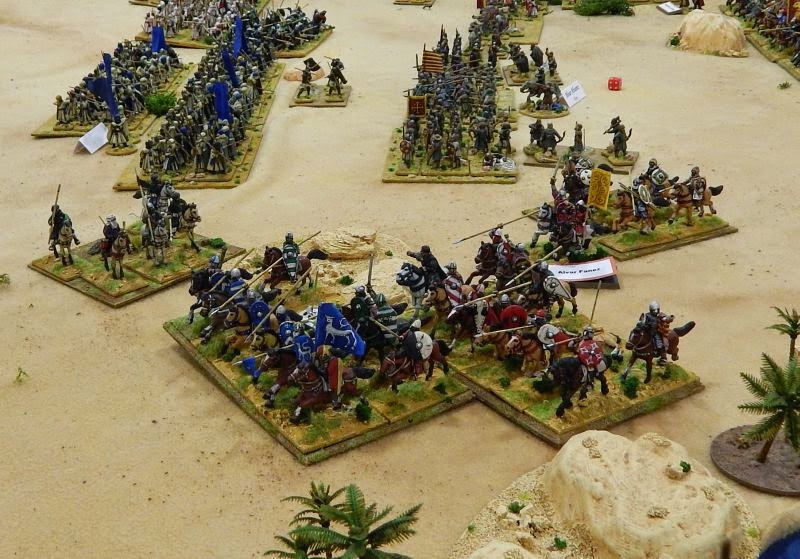 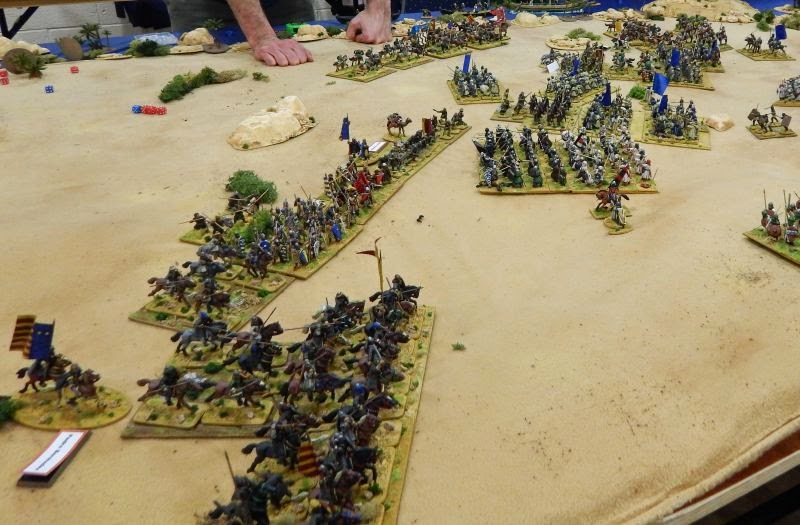 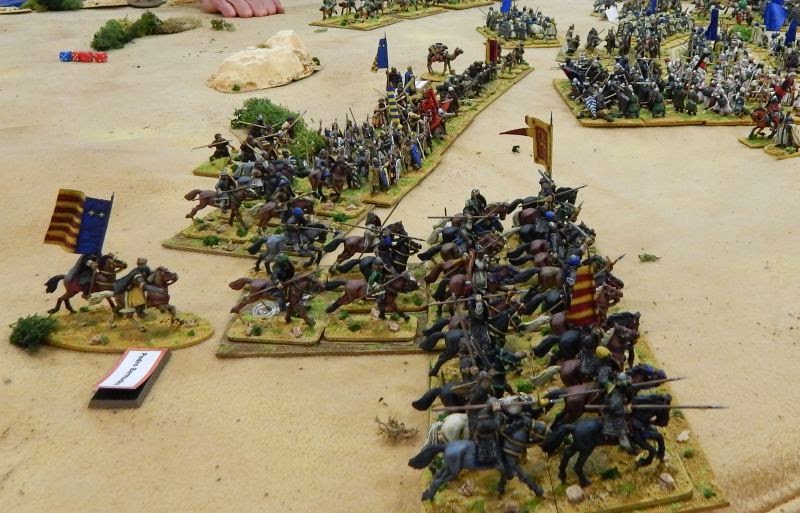 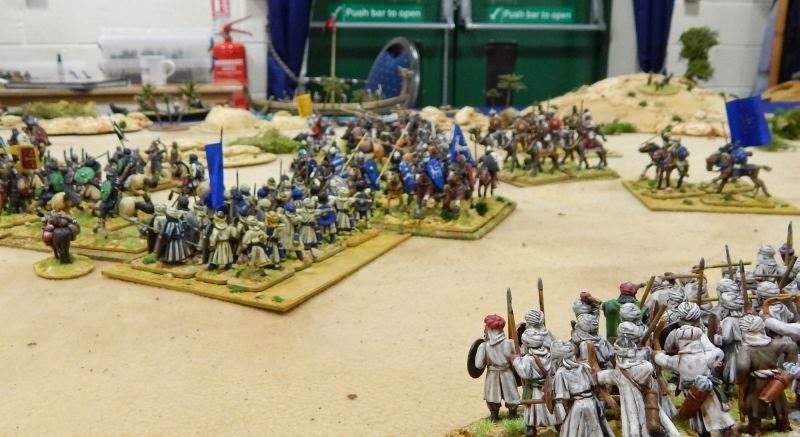 I would like to wish a prosperous New Year to all my readers. 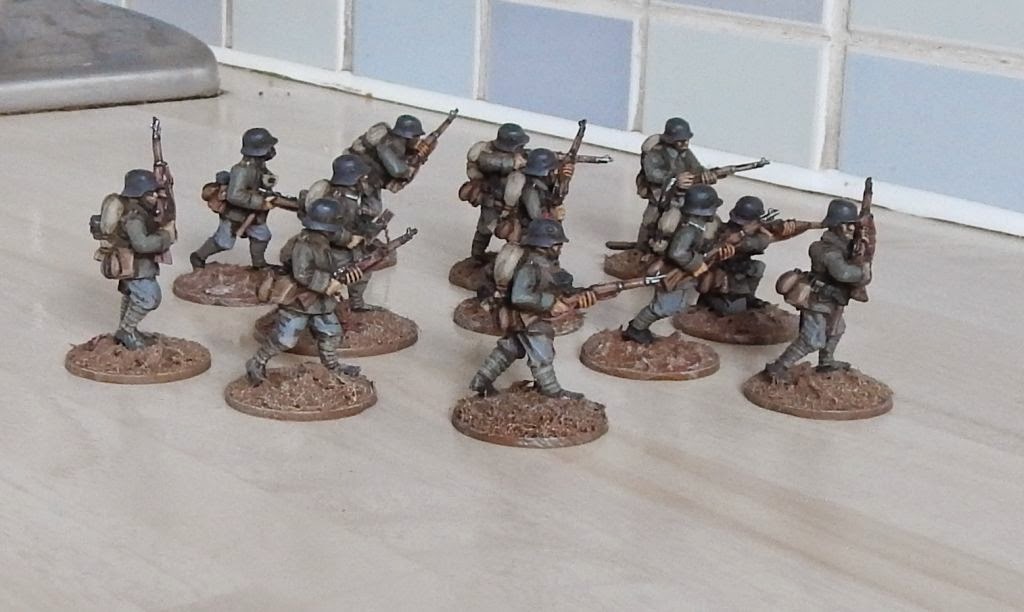 Over the Christmas break I have been adding to those initial four test models that I did and at a comfortable pace have added another eight to the nascent platoon.

I made a slight change to the original recipe and am now doing the weapon stocks etc. in Beige Brown rather than Saddle Brown.

As the light was so poor at the dining table, I took these on the kitchen worktop as there seemed a bit more light there.

I forgot to mention in my earlier post that Victoria was very generous to me at Christmas and bought me a new Nikon Coolpix L820 camera. Here are a few 'extreme close-ups' warts 'n all. 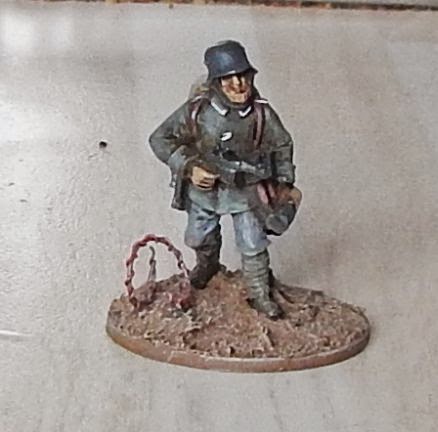 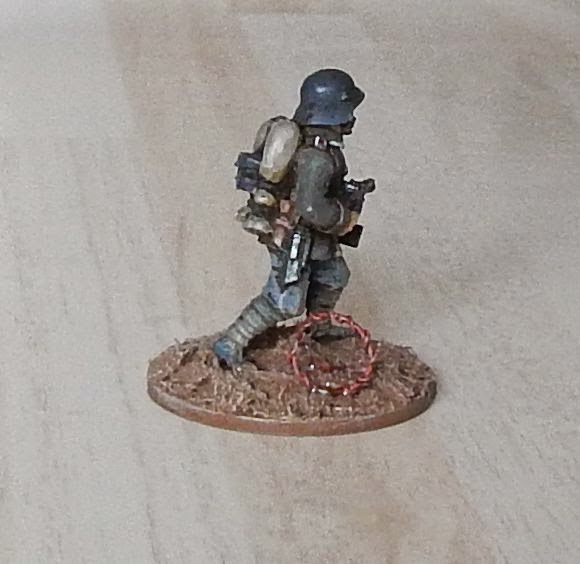 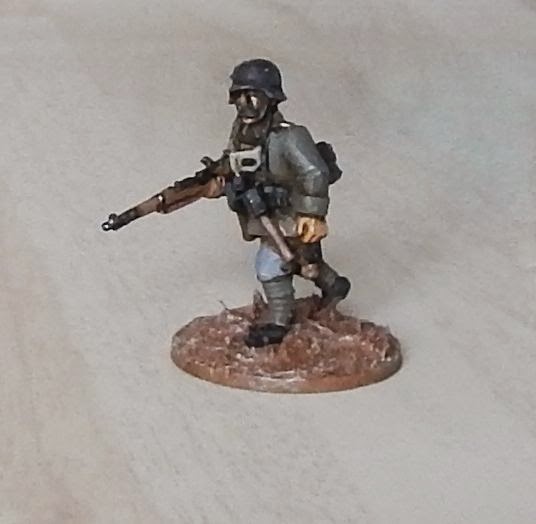 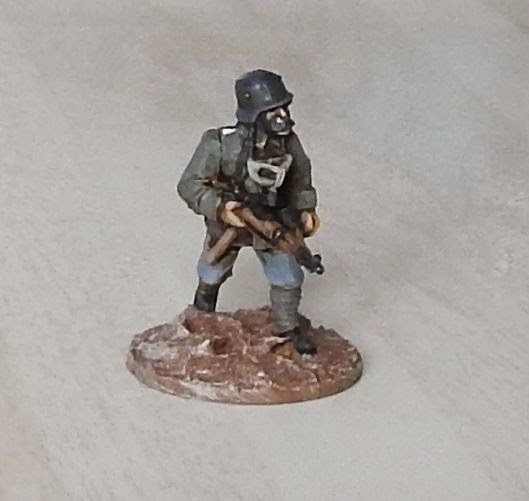 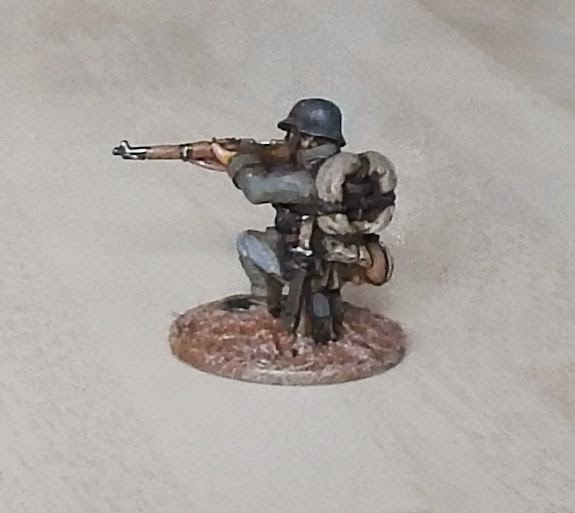 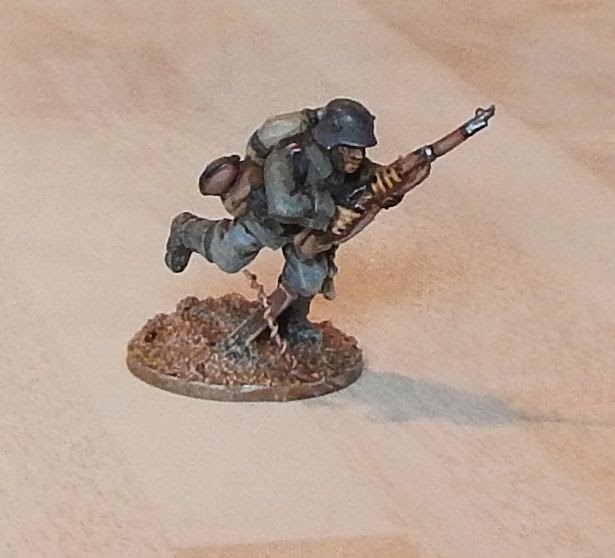 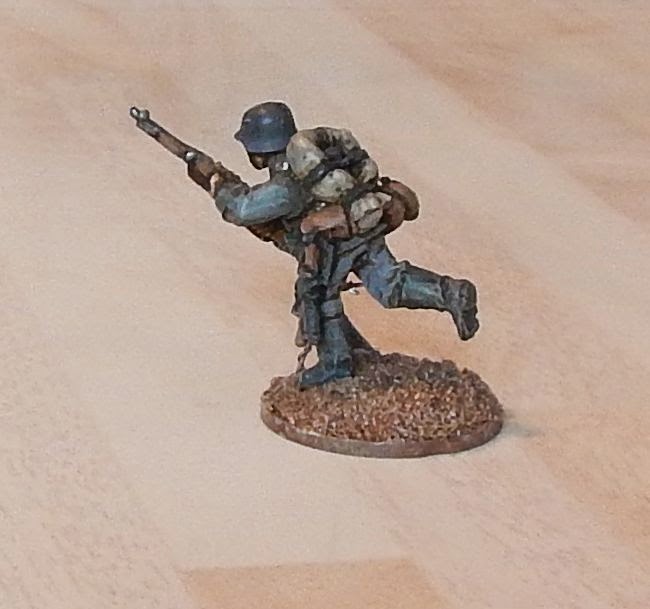 Finished off an Alae of Republican Romans 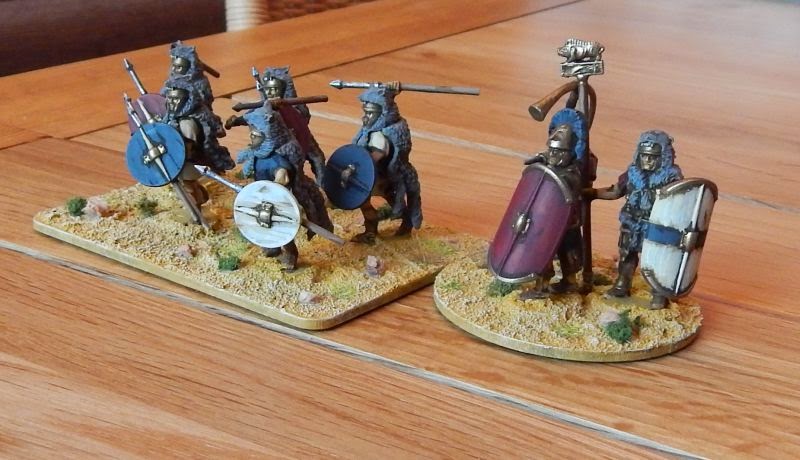 I have completed the last handful of figures from the two half-boxes of Victrix Republican Romans. One command base of Romans and a unit of Velites in wolf-skin. I finished painting these a couple of weeks ago, but only completed the bases yesterday.

I have done a 50mm diameter command base with a Centurion, Signifer and musician. 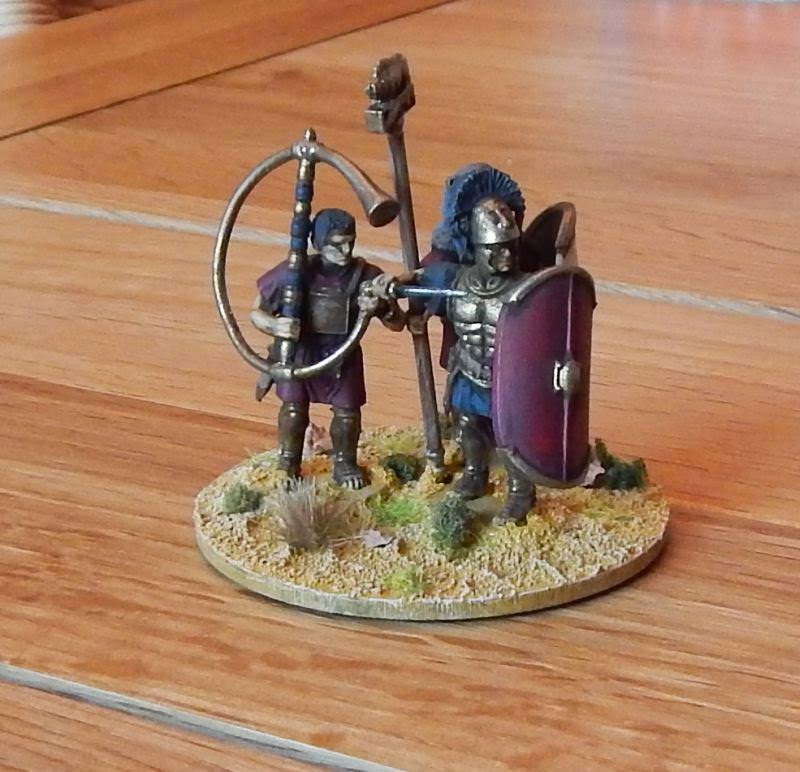 Plus a unit of five Velites with wolf-skins to supplement the two units of Velites I already did. 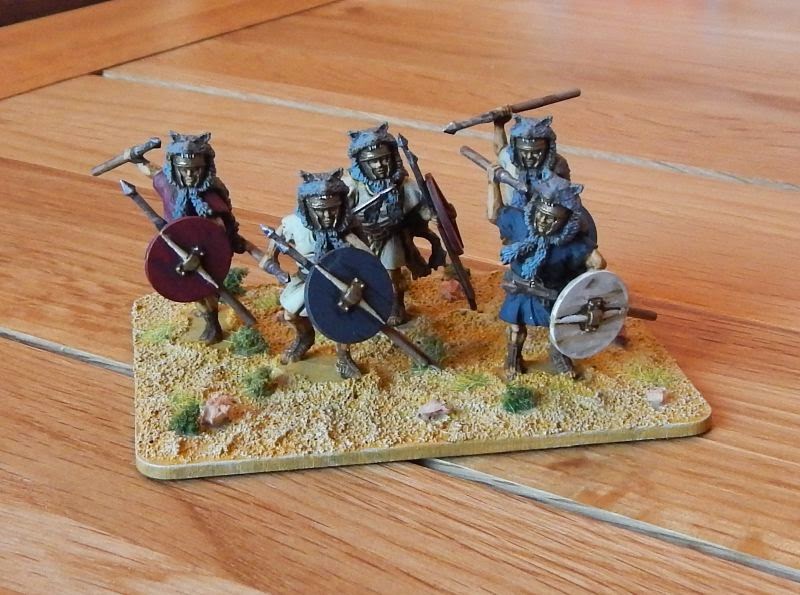 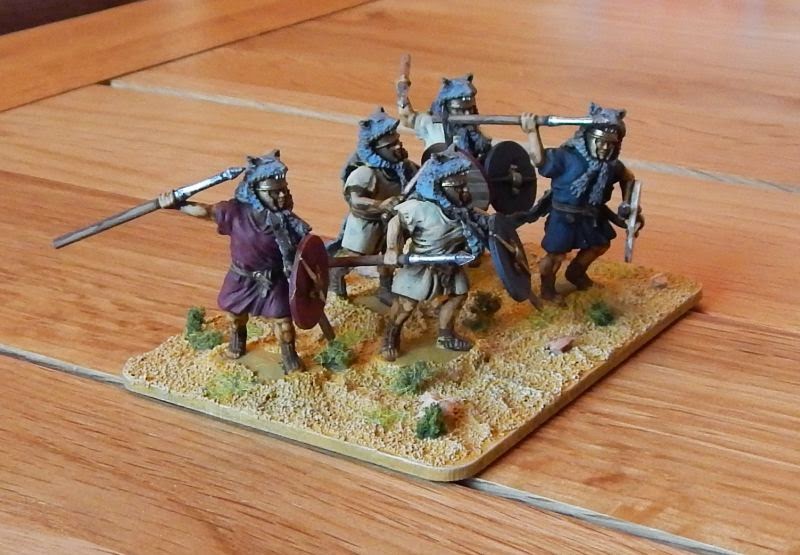 James and I shared two boxes of the Victrix Republicn Romans taking half each from an armoured and un-armoured box. This has given me a good sized force of one Command stand, one unit of Triarii, two units of Principes, two units of Hastatii and three units of Velites.

Here is a shot of the completed force:

I should really do another box to complete the legion and then add some Equites, but I have a few other projects on the go at the moment so will not be rushing out to get any more.

Posted by Paul Scrivens-Smith at 12:22 No comments:
Email ThisBlogThis!Share to TwitterShare to FacebookShare to Pinterest
Labels: Painting, Punic Wars, Victrix

A new army for Christmas 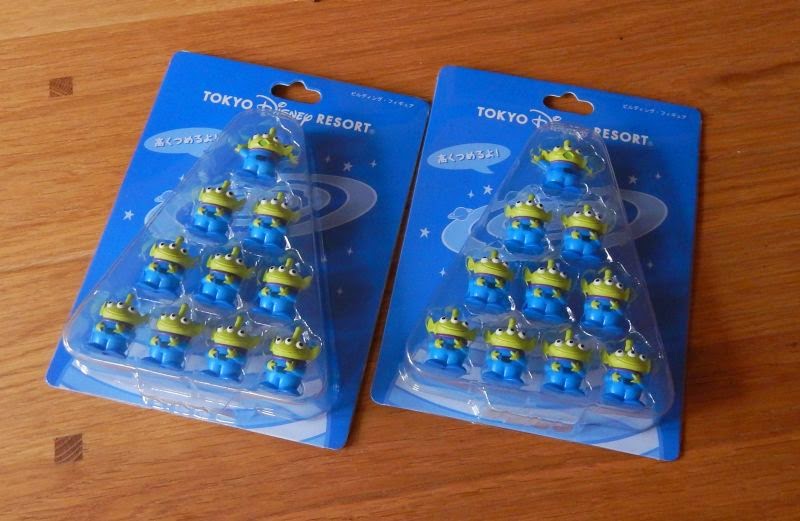 My lovely wife, Victoria, has purchased me a new army for Christmas and it is all already painted - bonus.

We saw these while we were at Tokyo Disney Seas earlier this year and at only 1500 yen (about £9.00) per pack Victoria purchased a couple and hid them away.

Each pack contains a section of ten Little Green Men (as they are known as in Japan, everybody else calls them Aliens) , one of them in a section is the leader leader equipped with a 'claw' and gesticulating wildly.

They are also capable of advanced tactical formations as seen in the shot below. 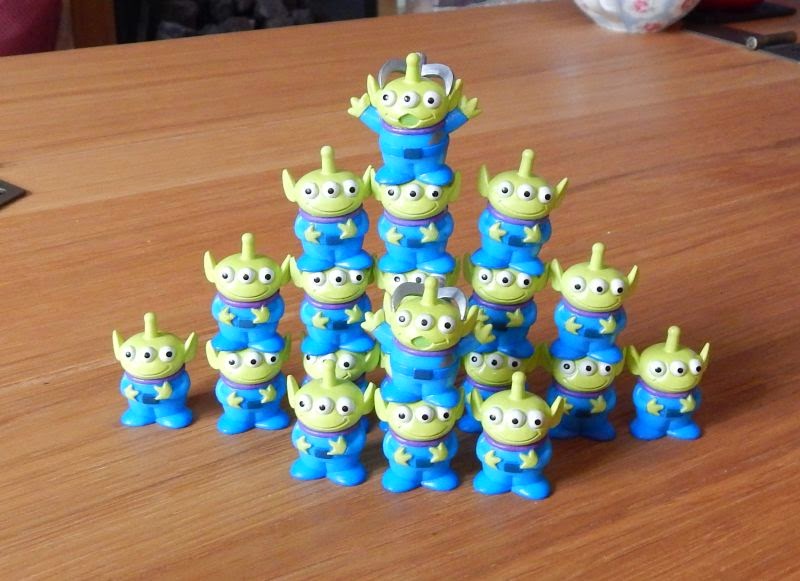 No doubt I'll be able to use them against Ians Teddy Bears or Mogs Toy Soldiers
Posted by Paul Scrivens-Smith at 11:12 No comments:
Email ThisBlogThis!Share to TwitterShare to FacebookShare to Pinterest
Labels: Little Green Men (Aliens)
Newer Posts Older Posts Home
Subscribe to: Posts (Atom)