I spent yesterday in the sun on the back garden finishing off the paint job on another eight Caballeros. I spent so long out there I got sunburn on the back of my neck.


Here are the eight Caballeos: 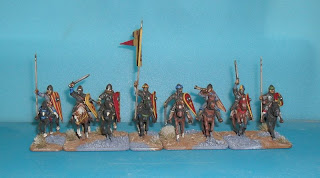 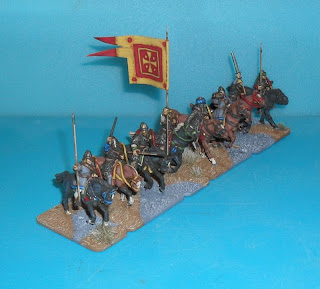 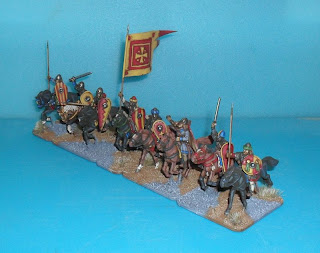 Here are a few close ups.

Here is the whole lot so far, it's getting very close to 2000pts now.

I also cleaned up and did the cleaning up and 'green-stuffing' on the remainder of the El Cid models ready for a spray of primer.


Today Victoria (Mrs Scrivsland), Steve, Lesley and I went to Partizan at Kelham Hall, we had about an hour and a half mooching around the show. I failed with the 'no figure buying' and purchased another 30 Perry Miniatures First Crusades to use in the El Cid force:


So another thirty figures on the lead pile. Not much of a report on the event, there were the usual traders and some very nice demonstration games as usual. I think I spent more time catching up with old friends though.


After walking round the show, we had a picnic in the grounds of Kelham Hall, Victoria had prepared a great spread of home made pies, cakes and goodies, we also shared a bottle of Champagne.


Victoria had even bought some bunting. 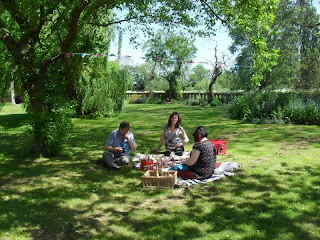 Back from Partizan I spent more time in the sun on the back garden cleaning up the new purchases, adding a bit of 'green stuff' and they have now had a spray of primer. There are rather more El Cid figures to do but it looks very much like an army now.

The Battle of McColls Farm

Overview
Lee McColl and myself had another game of Black Powder ACW yesterday evening at MaelstromGames. Being rather lazy I reused the orders of battle from the last game I played. This would be an encounter game of roughly even sides. Both players would try to hold a strategically important farm house on their side of the table, while attempting to take the other players farm house.
As we were playing in 6mm we would use half distances.
In a departure from the normal rules, a brigade would not be considered broken until over half of its units were destroyed or shaken.
Union Order of Battle


The figures and terrain are all from my own collection. The troops are all Adler 6mm.

The table was set up with a farm towards each players side of the table, we would try to hold our farm while simultaneously capturing the opponents farm. The area on my right was open woodland and an area in the center was walled fields.


I deployed my Brigades from left to right: Randall, Ward, Burling. Randall would try to hold my farm, Burling would advance through the woods and attempt to take the Confederate farm and Ward would support in either direction as needed.

Lee deployed from L-R Andersons Brigade to hold his own farm, Hambricks Brigade in the Center and Manlys Brigade on his right opposite the Union farm.

Lee had not played before, so, in order to explain the orders system, I took the first turn. In a fantastic display of leadership, Brigadier General Ward first ordered the sharpshooters to occupy the edge of the woodland opposite the Confederate farm and then the rest of his brigade stormed up in support of them. The rest of the Union army was more sluggish. Brigadier General Randall managed to order his sharpshooters to occupy the farm on the Union side but the rest of his brigade sat on their packs. Brigadier General Burlings brigade advanced slowly  towards some fields to their front. As the Confederates were out of range there would be no shooting.


Lee too his first turn, maybe I should start referring to him as General Lee from now on. One Regiment of Andersons Brigade occupied their farm with the rest of the brigade hanging back ready to provide support. Both Manly and Hambricks brigades advanced towards the Union held farm.

On my second turn, Randalls troops moved up in support of the sharpshooters in Union Farm, and Burlings Brigade occupied the walled fields in the center of the table, Wards enthusiasm of the previous turn waned and he was unable to encourage his troops to advance against the farm. Lee countered this and we were soon engaged.

Randall was unable to extricate his artillery, and they were soon swept away at the point of the bayonet - the first casualties of the engagement. However, it did not go all the way of the confederates as they were unable to shift the puny unit of sharpshooters from Union Farm.


Hambrick got heavily engaged with Ward in the center, with some nifty shooting, it seemed that Hambricks troops were constantly disordered and were unable to make headway.


Despite taking out the artillery, Manley was unable to shift the Sharpshooters and things started going the Union way around that farm. Randalls units counter attacked and were soon driving the rebels back in disorder.

Around the Confederate farm things were not going well for the Union troops of Burlings brigade, a lot of disorders from shooting and command inertia put them on the back foot, while Manlys Brigade were able to outflank them.

Towards the end of the game we both had a single brigade broken and in the final clash both managed to break a brigade of each others. A fair result for a good scrap.