Today we had another crack at Maurice. This time Karsten and I would play the Duchy of Scrivslandia while Rich and Steve would be the evil Prussians again.

This time we would use 100AP armies with an additional 18AP allowed for National Characteristics.

Karsten and I picked:

For our National Advantages we picked Great Captain and Cadence.

For their National Advantages they picked Lethal Volleys and Oblique Order, how very Prussian.

Next we drew a Battlefield card and we would be playing on 'The Plains'. As we had more cavalry and 'Great Captain' we easily won the scouting roll off and chose to attack, adding another Regular Infantry unit to our forces.

We then rolled for terrain, and between us there would be a very crowded twelve pieces of terrain on the table, with the objective being a town in the Prussian deployment zone.

Steve and Rich deployed the Prussians, the cavalry were held in a echelon reserve on their right flank, all the guns were on a hill in the centre supported by the majority of their infantry. A single unit of Trained Infantry held the town, and two units of Trained Infantry and a unit of Grenadiers made up their left flank.

Both sides would have and Army Moral of 17.

It was time for the game to kick off and it went terribly for the Scrivslandians. The initial advance was countered by desultory fire from the Prussian artillery but as we got closer the Prussian infantry moved to counter us and their clockwork volley fire soon started to tell.

As they had advanced their infantry ahead of their starting positions a very useful tactic with the defending Prussians was to declare a volley phase in their turn and then retreat their infantry so it would be out of range in our turn, then we would have to advance into the volleys in their phase again. We soon were taking losses from our units and every D3 roll seemed to come up a three.

Very soon we were pressing the objective and had managed to knock out a couple of the Prussian units but we had lost six in return but due to some poor rolling on the Army Moral effect dice had very little in the way of Army Moral left.

It was almost a relief when we lost another unit and took three from our Army Moral. A crushing Prussian win, they would amass four Epic Points to our one.

We did play rather differently this time, rather than concentrating all the action in a small area we were attacking across a broad front and I think this was our main undoing, but when two people are playing a force, it's difficult to say 'you sit there and look pretty with your part of the army, I'm going to have all the activations.'

We are still keen to keep going at this, and we hope to kick off one of the Succession Wars campaigns in the very near future.

All the figures are 40mm semi-flats cast up and painted by Steve.

Another 14th Army infantry section and a bit of Burma vegetation

What with Salute last weekend and repairing terrain boards for our WWII Burma game at Partizan in June I've not really had a lot of opportunity to do much figure painting for a few weeks. However, this week I did manage to get the final highlights done on another eight men to use as an infantry section with my British Empire Burma forces. These are all figures from The Assault Group and comprise a NCO with a Sten Gun, a Bren gunner and six infantry with Lee-Enfields.

I've also made some more small vegetation pieces for the Burma game, comprising the simple expedient of sticking the bristles of a scrubbing brush onto a 25mm diameter MDF base.


Here are some close ups of a couple of the figures.


I've got quite a bit ongoing this weekend, I hope to finish off the refurbished terrain boards along with the 'Toilet on stilts' and 'Well with no bucket' pieces. I've got some more 14th Army infantry on the go along with some mule teams and I've just made a start on a Die Waffenkammer Universal Carrier that is being done for the Burma project too. I'm playing Steve tomorrow at Maurice using the 40mm 'semi-flats' and have games on both Wednesday and Thursday evening. It may be a busy week of posts on Scrivsland.

Posted by Paul Scrivens-Smith at 07:53 3 comments:
Email ThisBlogThis!Share to TwitterShare to FacebookShare to Pinterest
Labels: Battle of Meiktila, Painting, WWII

I originally made this table back in 2005 and although it's not seen a lot of action it's lived up to it's durable objective.

I am currently revamping the boards to use in our demonstration game at Partizan next month so I dug out the old photos to show the thought process behind these.

For over 20 years I've been using the TSS terrain tiles and they were looking rather ratty, especially around the corners so I wanted to make some more durable terrain in 4ft x 2ft sections.

First of all, as the base is a 4ft x 2ft bit of hardboard (it may be MDF I cannot remember). 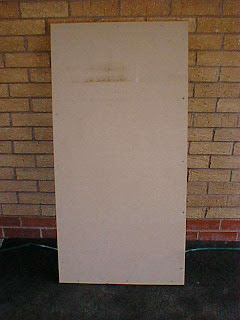 I then added a frame of 40mm x 25mm timber around the edge. 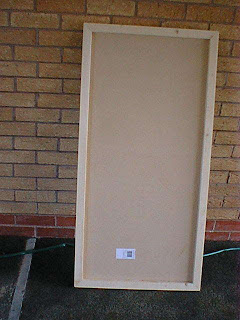 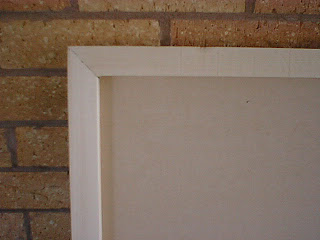 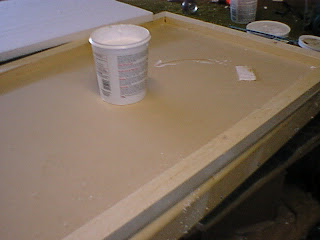 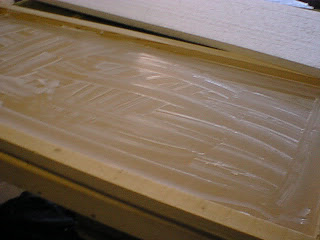 A suitably sized bit of polystyrene installation foam is inserted into the void. 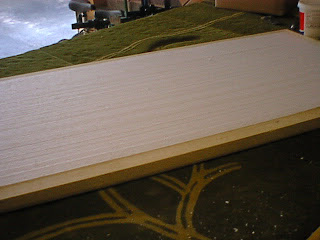 In order that the edges of the large hills be as protected as the rest of the edge a section of the baton is added to the edge where the hill butts against it. 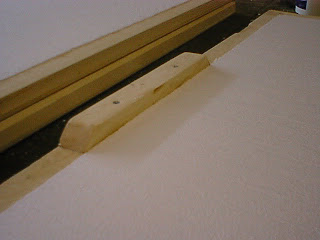 The ploystyrene hill is then stuck down, again with PVA glue 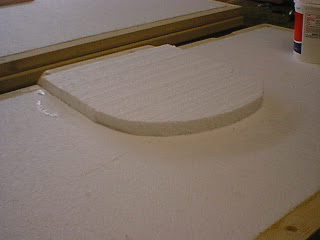 The hill is moulded to shape 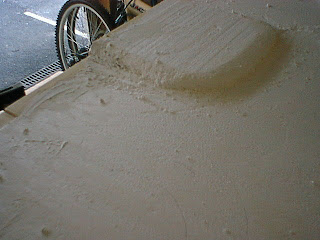 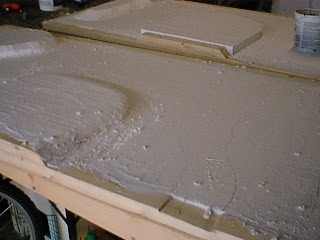 The rive is then cut into the polystyrene. The whole thing is then given a coat of filler. 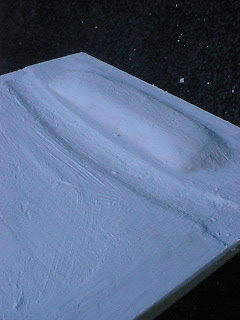 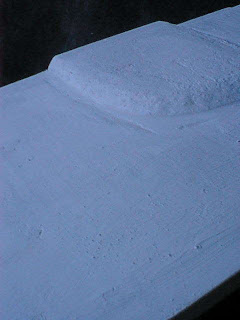 Next up the boards are all painted with Sandtex Bitter Chocolate masonry paint. 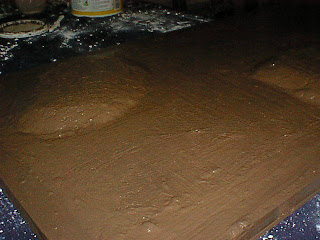 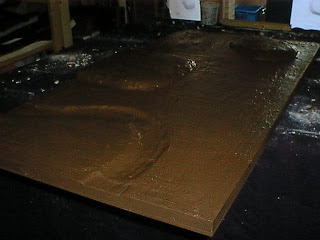 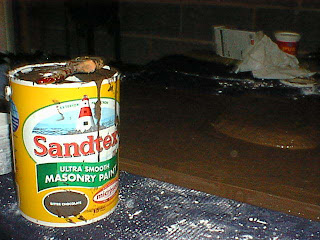 Now I want to add some light texture to the boards, for this I used B&Q Kiln Dried Sand, this is very fine. 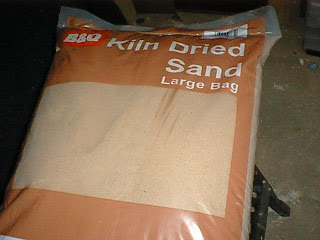 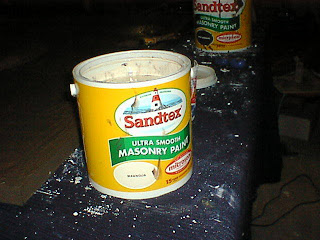 While the paint is still wet the Kiln Dried Sand is sprinkled on. 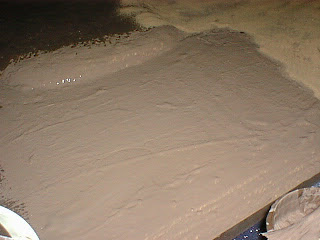 Eventually covering the entire table - apart from the stream beds. 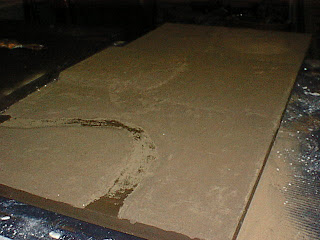 Once dried it's another coat of Bitter Chocolate to seal it 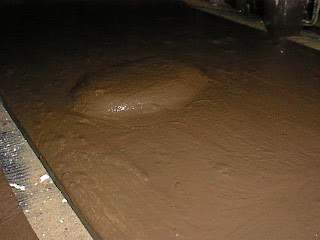 Here they are laid out in the sun to dry. 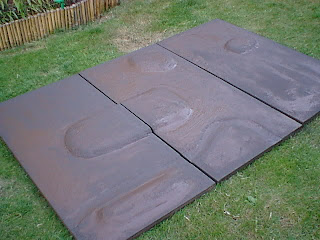 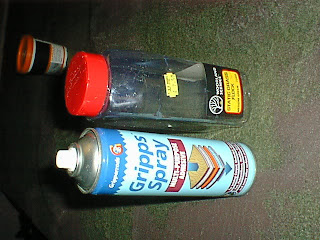 And here are some games in action, these are very old photos, I sold those Flame of War American Armoured amny years ago. 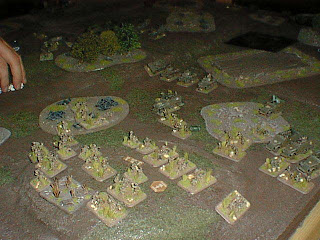 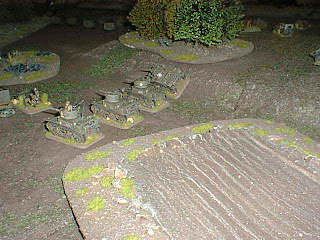 Anyway, after eight years, I'm now tarting up these boards for our game at Partizan in June so look out for some new images in a blog post soon.

Posted by Paul Scrivens-Smith at 21:10 2 comments:
Email ThisBlogThis!Share to TwitterShare to FacebookShare to Pinterest
Labels: Terrain

It was rather a Black Powder evening yesterday at Mansfield Wargames Club. Three games were being played and all of them were using Black Powder. James and Trev were playing a Napoleonic encounter between the French and British, Quint, Paul, Adie and Ian were playing an American Civil War game and Martin and I would be playing another Napoleonic game pitting French against Prussians. Martin (mog) has not played Black Powder before, but has painted up a rather splendid Prussian force. Using Adies latest opus, Albion Triumphant II we met up at the Rifle Volunteer and both picked about 500 points and set to.
Martin used something like:


I picked a French force from the same book


We settled down to play a game that was over in about 45 minutes, of the first eight break tests seven of them failed to roll above a four! The French army was soon nursing three broken brigades.

What an introduction for Martin!

With the evening still young we decided to go back to our start lines and have another go at it. The second game was much more balanced. I soon saw off the Prussian cavalry and then concentrated on Martins Landwehr brigade, which although outnumbered by the French battalions was giving better than it got. We eventually wrapped up at ten thirty calling it a draw, Martin had lost his Cavalry, I had lost one of my cavalry brigades and neither of us were making headway against the opponents infantry. It was time to wrap up.

Here are some more images from the game, Martin painted all the Prussians and I did all the French.