Action in the Don Bend 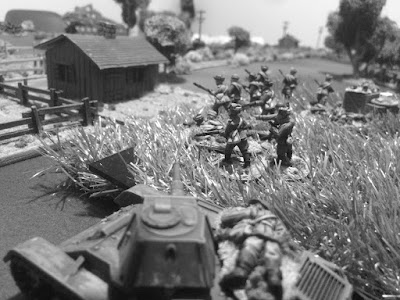 I've been painting WWII Soviets and Germans for Chain of Command for a couple of years now and in that time I've managed one game with them and that was about 30 months ago. Something had to be done.

This past couple of weeks I've painted a T-70, some more Germans and some Soviet casualties, so it was time to get a game in.

Using the 1942 lists available in the Chain of Command Facebook group I would use a 1942 German Grenadier platoon while Drew had a full strength Soviet Rifle platoon. My Germans would be attacking in the Hasty Defence scenario from the Blitzkreig 1940 supplement.


After the Patrol Phase the jump-off points are shown on the shot above, Soviets marked in red stars, Germans with black dots, the jump-off at the top would give me a good opportunity to exit a team from the Soviet board edge.

In support I had an adjutant, an anti-tank rifle, a tripod MG-34, a sniper and a Panzer IIIJ while the Soviets fielded supports of a flamethrower, a 5cm mortar and a T-70.

Trying to fulfill the first of my objectives I had a double-six so deployed rushed my anti-tank rifle team from the jump-off towards the Soviet table edge, the team took a little fire killing one man but they were soon safe in the lee of  a hill.


The Soviets started to move to block my advances and a sharp firefight ensued, supported by the Panzer III the Germans initially had the upper hand, but I then became focused on taking out the T-70 and the Soviet fire began to tell on my troops and soon grenadiers were being thinned out.

A 5cm mortar round landed on my medium machine-gun and knocked out the Feldwebel commanding that so even less supporting fire became available for the grenadiers.


The telling blow came when the Oberfeldwebel was killed stone dead in an exchange of fire with the Soviet infantry, unable to manage shock and with the ranks thinned the Germans were either pinned in place or breaking to the rear.

With my force morale collapsed the Soviets were left in charge of the battlefield.

I think I need to relearn the lessons of this game.

Posted by Paul Scrivens-Smith at 16:57