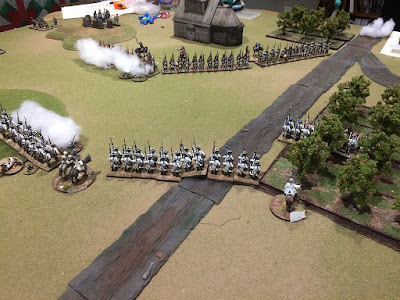 Saturday saw me take the couple of hour drive down to Palatine IL to join the chaps there for my first ever game of Sharp Practice.

Phil was hosting us and after a splendid vegetarian chilli we retired to the games room to get set up. Phil, Alan and Ed would be playing the Austrians, while Mark, Liam and myself the Prussians. We decided on the Attack on an Objective scenario with 100pts of troops per side. The forces after adding the random component (if my memory serves) were:

The Prussians would be defending the church in our right hand sector while the Austrians attacked up the road. 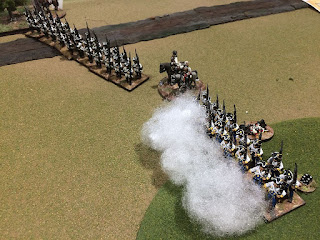 The game played out really well. The Prussians formed a defensive perimeter around the church while the Austrians demonstrated to the front with infantry, skirmishers and cannon while pushing their Grenadiers up their close right flank and sending the horse on a wide right flanking manouver.

I commanded the Fusileers and although they were rather tardy at first they did eventually engage the Austrians to their fore and seemed to be getting the better of the fire-fight. 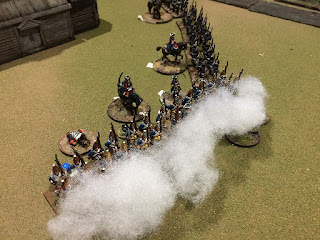 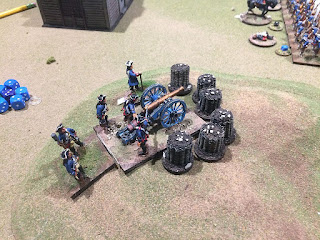 Following a volley from the Grenadiers the Dragoons charged in, but were repulsed by the fire from our Musketeers. Then the Cuirassiers charged in and were destroyed to a man and their leader killed.

The Austrian Grenadiers continued to pour fire into our Musketeers forcing them to step back, then the rallied Dragoons administered the coup-de-grace and our left flank collapsed along with our Force Morale. 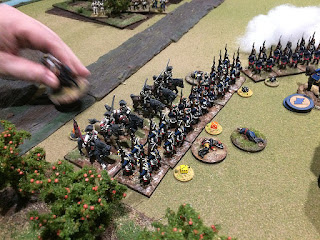 A really enjoyable game with great company. I really enjoyed myself and the rules played out really well. Our group in Madison are having our first game of Sharp Practice on Thursday with the new American Civil War collection
Posted by Paul Scrivens-Smith at 07:38