Ady took the part of the RAF and I played the perfidious Hun.

Both A and B flight are scrabled to intercept different contacts. A flight is unable to make a contact, but B flight bounces three schwarm of Bf110. 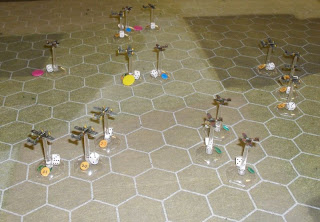 As usual, Blue Section are first into the thick of the action, with the initial shots of the engagement Pilot Officer Devlin rips into a Messerschmitt, which disintegrates, the two Hun are seen to bail out.

Flying Officer Boggs accounts for that bogies wing man too which explodes in a ball of flame.

Sgt. Carradine puts in a fine display, one Messerschmitt explodes under his fire and another one takes a fatal hit on the pilot and is seen diving to earth, the gunner escapes. But, Blue section does not have it all their own way, just like the previous engagement, the German gunners are much more deadly than the pilots. F/O Boggs aircraft suffers Critical Instrument Damage and P/O Devlin fares even worse, a lucky burst severs his rudder, but he is able to bail out. Sgt. Carradine also takes serious damage from 20mm cannon fire.

Green section does not fare quite so well in the shooting stakes, a terrible mistake by Flight Lieutenant Clark results in him colliding with Pilot Officer Hood, fortunately the damage to both aircraft is light. F/Lt Clarke later atones somewhat by shooting down another Messerschmitt in a ball of flame.

Another flight of Hurricanes join the fray and account for yet another Bf110. 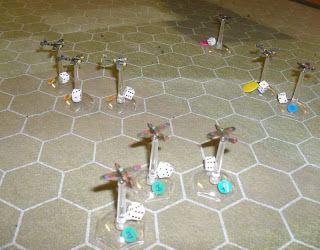 68 Squadron break off, low on ammo, when a schwarm of Bf109 are sighted. They really seem to have the measure of Bf110 but cannot cope with the more maneuverable Bf109s’.

Shortly after the engagement, two of the damaged Bf110 crashed making their escape, but no pilot was able to claim a probable.
Totals now, 5 Hurricanes lost, 14 Me110 and 1 Bf109 shot down.
Posted by Paul Scrivens-Smith at 18:30

Email ThisBlogThis!Share to TwitterShare to FacebookShare to Pinterest
Labels: Bag the Hun