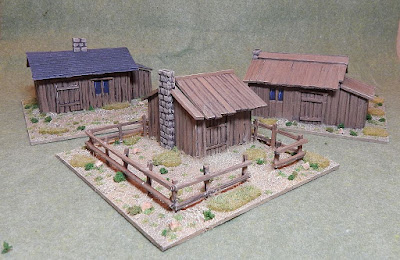 A couple of weeks ago I decided that it was time for a new project so have ordered myself a platoon of Soviets from The Assault Group and a platoon of Germans from Crusader Miniatures, plus a bunch of supports, neither do a Soviet 50mm mortar so I ordered a Bolt Action one from Noble Knight Games. I'm planning some mid-war Chain of Command games with them. The locally sourced stuff has arrived already, but while I wait the arrival of the rest from the UK I have made a start on a few buildings to use with them.

Last weekend I popped over to Michaels to pick up foam board, coffee stirrers and some balsawood blocks along with some 5mm plywood to use as bases. I'm really lucky that we have a Michaels stor ten minutes walk from my front door, a trove of great crafting stuff for projects like this.

The buildings are based on a structure of foam-core with the walls planked with stirrers. The roof is made from balsa wood planks while the doors are also cut from balsa. For the chimneys I cut a length of balsa and then drew the bricks on by pressing hard with a biro. The door frames and lintels are made from split stirrer.

Once completed the whole thing was sprayed with grey primer and given a base-coat of raw umber artists acrylic. The woodwork is picked out with thinned Beige Brown and then again with another coat of Beige Brown. The windows are painted Dark Prussian Blue then a highlight of intense blue with a 'reflection' of Ivory in the corners. The chimney is US Tanned Earth highlighted again by adding a little Dark Sand, the mortar is left the original raw umber. The whole thing is given a light dry-brush of Dark Sand.

The first house is the Babushkas cottage slightly dilapidated with a lean-to, all with wooden roofs and a small fenced area at the back. 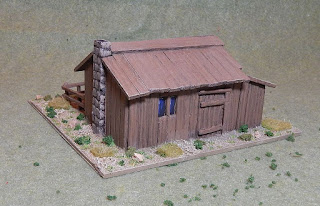 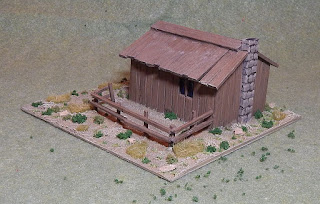 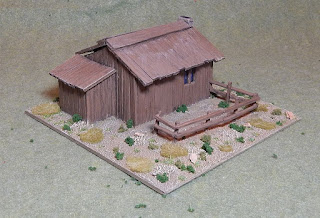 The second building is a workers cottage, smaller than the first and with no lean-to and a fenced garden where the inhabitants can grow their own after toiling at the collective all day. 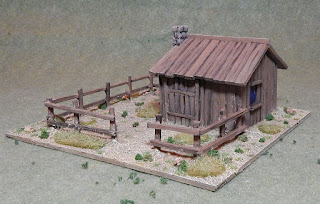 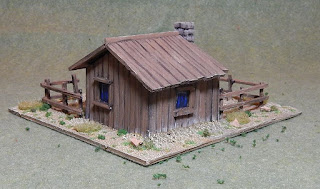 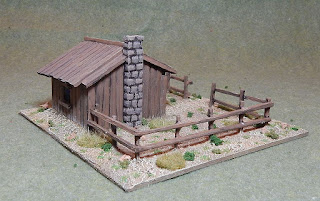 The third is a sturdier construction, both the roof and lean-to have tiled roofs (using laser-cut tiles from Warbases). This cottage is now occupied by a party member, it has the luxury of front and back doors and four windows. 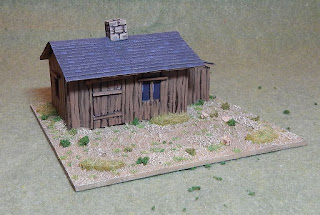 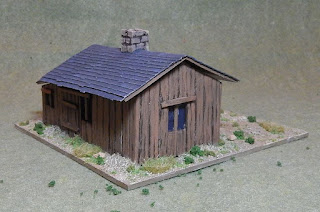 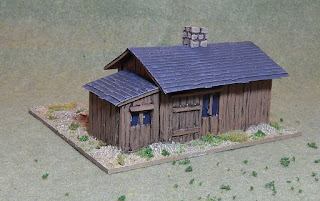 All the buildings have been built with removable roofs for such times when chum James checks to see if he can put figures inside. 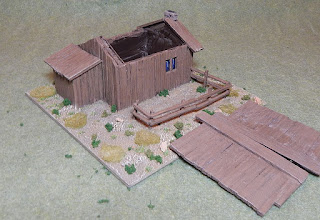 Posted by Paul Scrivens-Smith at 11:19