El Cid To the Strongest at What Khan 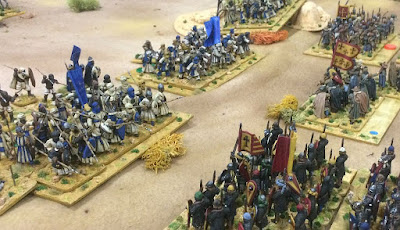 Last week I travelled the short distance - just over an hour - over the Illinois border to Rockford for What Khan.

Following on from my games with the chaps at Brown Deer I would be attending my first US convention and running a game of To The Strongest! to boot. I arrived just after 0800 to find Mike standing outside the door of the convention centre, and a good job too, there was bugger all signage for the venue and I would not have guessed I had the right place otherwise. 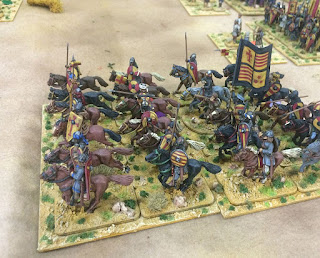 Mikes a veteran of my last game at Brown Deer and a keen proponent of To The Strongest! he had kindly offered to help out with this game. We were soon in and found our table and was very pleased to see that all six available spaces had been booked. As I had been on business in Europe I was unable to make the Saturday of the show when every table had been in full swing, Sunday was much quieter with maybe only about eight games in progress.

We soon had the table set up and all the units out and by the time we had finished all the players had arrived. This time I had decided to use playing cards rather than the order chits and due to the lack of markers last time was instead using counters, red and green for ammo, white for a hero and purple for a lance.

Also to assist the players each command was denoted with a unique coloured spot on the corner of each base. 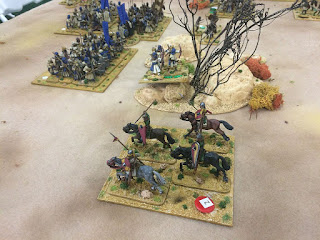 Now it's time to introduce our players, Bob, Michael and Ron would play the Almoravids while Terry, Kevin and Chester took the Spanish. On a cut of the cards the Spanish were the active player.
I gave a quick rundown on the armies and the rule mechanisms and then we were into action. For the first couple of turns the armies were closing and getting to grips, the first casualties being a couple of units of Almoravid skirmishers - I don't know why, despite their superiority in ranged missile fire the Spanish always seem to get the upper hand during this stage of the game. 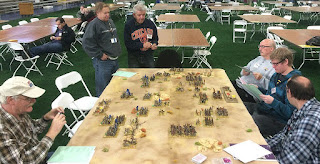 As the armies closed the combats were to and fro in the centre with neither side getting the upper hand. The swarms of Berber light horse on their left harassed the Caballeros and soon a unit of Christian Knights were wiped out! 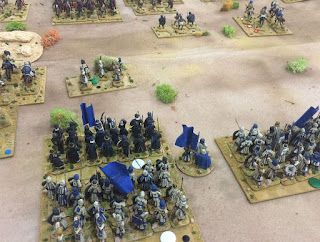 I took off for a short while to check out the traders while Mike took sole responsibility for the game - my wallet was untroubled though, I did not really need anything. I did have a good chat with the chaps at I-94 Enterprises though who did like my Battle of Britain t-shirt.

Getting back to the game things were going quite well for the Spanish, the Almoravids were down to their last 5 Victory Medals but it was not all going Spains way, every General of their was either dead or wounded and the next hit would kill! Alphonse had committed his cavalry reserve, the Hildagos had burst through a gap in the centre of the Almoravids and were facing Ben Yusufs Hasham Guard. In the ensuing combat Alphonse fell and the Victory Medals were exchanged. 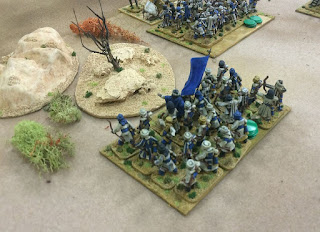 However, it all fell apart on the Almoravid right, the African mercenary spearmen charged to drive off a unit of Caballeros, made a complete mess of the ensuing combat and the Moors were out of Victory Medals, the Spanish had carried the day.

A well played game that could have swung either way and hopefully some new converts to the rules.
After about four hours play Mike and I got all the figures back in the boxes and had loaded the car. By just after 1300 I had done another lap of the traders and was in my car on the way home and settled down with a cuppa by 1430. 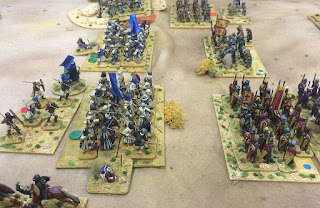 It;s my second US convention next week when I go to the local GameHoleCon in Madison, this one is only 20 minutes from home.

One last thing to add, the convention is in a sports centre and we were set up on the indoor soccer pitches, you cannot imagine how nice the astro-turf was on your feet when standing for hours on end! 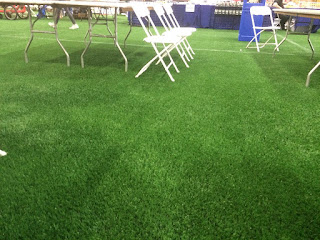 A few more pictures from the game. 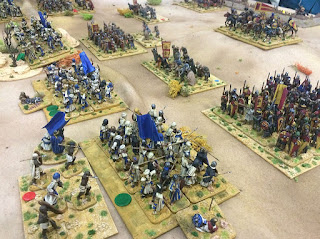 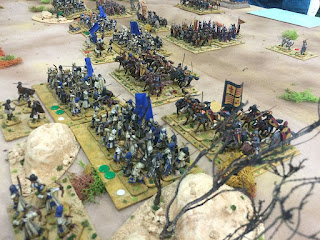 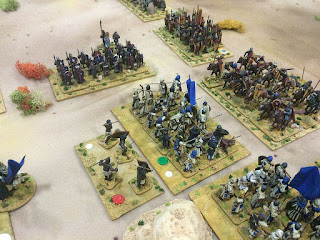 Posted by Paul Scrivens-Smith at 22:06
Email ThisBlogThis!Share to TwitterShare to FacebookShare to Pinterest
Labels: Battle Reports, El Cid, Events, To The Strongest