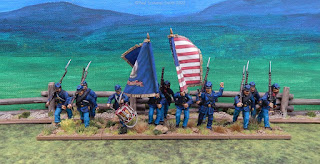 Because of previous rules sets played, my collection of Union troops for the American Civil War contains quite a lot of stands of troops, but not a lot of command stands. As I'm now playing mainly Pickett's Charge or Longstreet I need to get some more command painted, but don't need that many infantry.

So, this entry looks like a small unit representing the 4th Maine Infantry Regiment, but once some of the surplus stands already in the collection are added it will be fielded at a more normal six to ten stand strength. 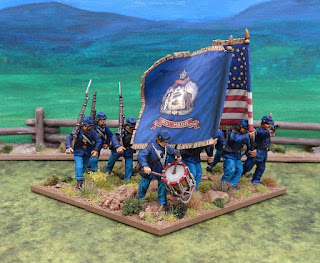 All the figures come from the American Civil War Union Infantry 1861-65 set of plastics, and I've assembled these infantry in this unit at right shoulder shift. 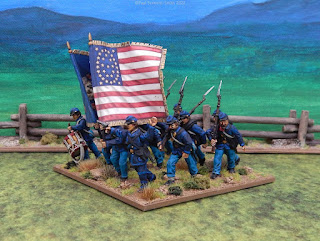 The pair standards are from GMB Designs.

Looks like a made a bit of a mess of basing though, that guy with the red neckerchief seems to be wandering off to his left, the sergeants need to get that sorted!