This weekend Tom and I went to the Bretwalda 'Age of Arthur' campaign day organised by those nice chaps at Peterborough Wargames Club.

We would be picking a 1500pt list from Age of Arthur along with a 250pt bonus force that you may get to use in some of the scenarios. As usual, I went for Early Saxon Kingdoms:

I picked Tom up at some un-earthly hour on Sunday morning and we drove down to Peterborough, eventually finding the venue at the first attempt.

Each faction gathered to chose their leader, every player in each faction rolled a dice and the highest would be the leader. I threw a six and would be Vortigern!

I would be playing the Hengest, the leader of the Saxon faction in the guise of Phil Morgan with his Later Saxon Kingdoms force. It would be a pitched battle and both of us would use our bonus forces.

The other players in the faction would be be playing pairs games of Pitched Battle.

I really did not fancy bouncing off all those Thrusting spear armed units so I deployed two units of Geoguth on my left flank facing the Duguth and Gedricht. There was a wood in the center so I pointed my Gedricht at that and put my remaining Geoguth and Duguth on the right.

The mounted Duguth bounced off my Geoguth and fled from the table but my Gedricht and Geoguth made slow progress against the Ceorls. As expeceted I did not fare too well on my left but did manage to keep the Gedricht and Duguth amused. At the end of the game we had both made great progress on one flank. Totting up the points I had earned 1018VPs and Phil had amassed 998VPs

We were within 100pts so it was a Bloody Stand Off, a fair result.

The defenders of Britannia had a good morning of it we had my draw, a minor loss in one of the pairs games, a minor win in another and a major win in the final game, we were taking territory from the Saxon invaders.

It was now lunchtime, Tom, Phil, Tony (I think) and  myself went to Wetherspoons for a pint and a burger, very nice it was too. Phil and myself wore our crowns to give the event a sense of occasion.

Back from lunch and the tables were laid out for seven different one on one scenarios. As king I was allowed to allocate my team to the scenarios. Having read them it seemed that a lot of the chance depended on who was attacker or defender so I handed out the scenarios more on the basis of who fancied playing which mission. I was left with Cat Coit Celedon.

Hngest had decided that Mike Whittaker would be playing Cat Coit Celedon for the invaders. We would both be using our bonus forces in this mission too.

Mike won the roll off and elected to attack. I deployed in depth hoping to be able to react to the advance before my Geoguth got carried away. Mike rolled for his sickness and his mounted Duguth and skirmishing bowmen would be reduced to toughness 2.

Mike began a general advance along the line, I responded with one unit of Geoguth wandering off on their own. In my first shooting phase I had my slingers 'double-shot' the mounted Duguth and did for 7 of them - fantastic shooting. The Duguth passed their test but would be ineffective in the game.

Mike continued the advance, I tried to flank his right with my javelinmen and my small unit of skirmishing Duguth saw off his javelinmen. Being march blocked severely restricted Mike and caused a bit of a traffic jam with his Gedricht trapped behind his front line. I was ready to react,  my Gedricht and Duguth charged in the centre bursting through the Duguth and pursuing into the Gedricht, breaking them the next turn running down the Cyning.

Mike managed to escape one unit of Duguth, but as he had lost his Cyning it would be a Mighty Victory for me.

The defenders of Brittania did rather well this time taking more territory from the invaders.

Going into the final round I would still be Vortigern, King of the defenders, Phil had also scored a mighty victory and remained Hengest.

In the final round I would be playing against Andy McTaggart at a scouting mission in which we would both be using our basic 1500pt force. There was a hill and a feasting hall on the table, if you held both you won a Mighty Victory, if you held one it would be a Close Run Victory and if they were both contested it would be a Bloody Stand Off.

My skirmishing Duguth managed to seize the feasting hall early, while the mounted Duguth were despatched by a unit of Geoguth. Things were looking secure on my left flank. I attacked in the center with the Gedricht and burst through, I was quite depleted though, but turned around and charged Andys Gedricht eventually coming out on top in a protracted combat. It was the end of the game and I now held both the building and the hill. Another Mighty Victory.

The invaders had made some gains in the last round but the defenders were resolute and came out on top.

Here are some additional images from the day. Sorry about my poor photography. 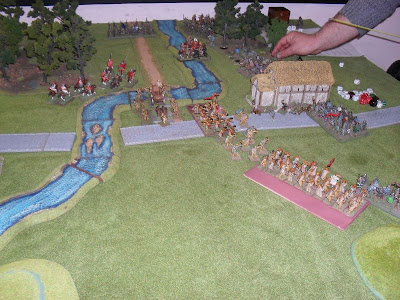 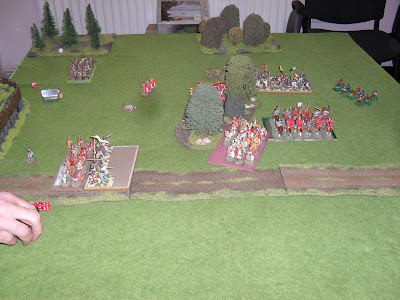 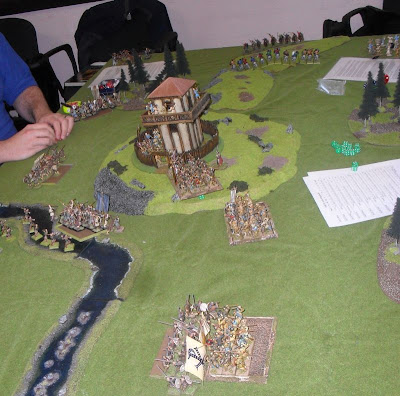 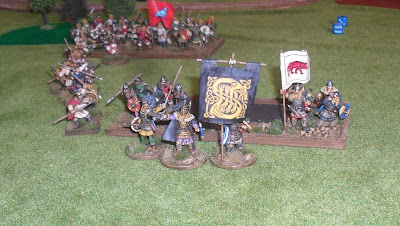 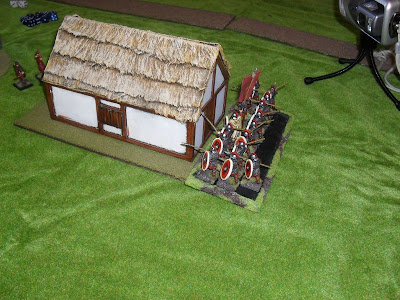 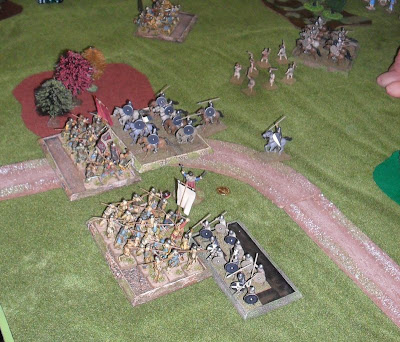 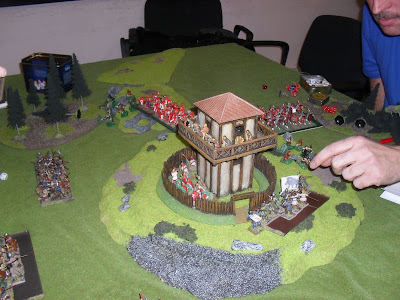 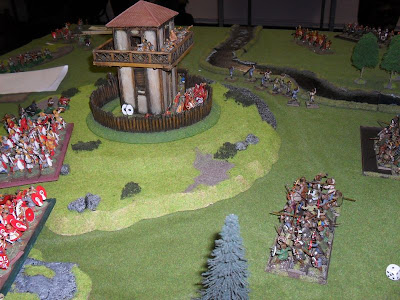 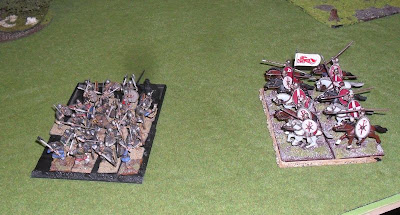 Posted by Paul Scrivens-Smith at 15:28