Last Thursday Mark, Martin, James and Myself had a cracking game of I Ain't Been Shot Mum, with a re-fight of some action in the Eritrea 1941 campaign. An under-strength company of Cameron Highlanders would attempt to clear some Savoia Grenadiers off of a ridge during the early part of the Keren battle.

It's over a week ago now and my memory is a bit sketchy, but the forces were:
British:


The Italians deployed one section and the sniper on the ridge and all other troops were blinds on their relevant table edges. Some terrible luck for the Italians saw the shock markers rising and the Tea Break always seemed to come out before their Big Man meaning that the shock stayed in place.
By the end of the game, a couple of sections of Highlanders had taken the Italian left flank and were sweeping along the ridge pretty much unopposed.

We played one activation card per section rather than per platoon and the game clipped along nicely, in fact I think it's likely the first  I Ain't Been Shot Mum we have played to a conclusion on a club night.

Here are some images from the game, I provided a couple of section of British, the remainder of the British, all the Italians and the terrain was made an painted by James. 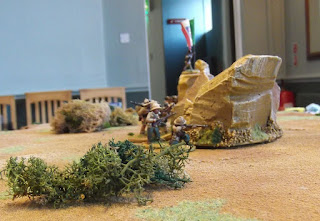 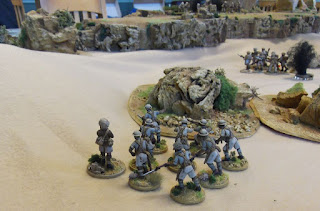 Posted by Paul Scrivens-Smith at 16:10

Email ThisBlogThis!Share to TwitterShare to FacebookShare to Pinterest
Labels: Battle of Keren, Battle Reports, I Ain't Been Shot Mum, WWII