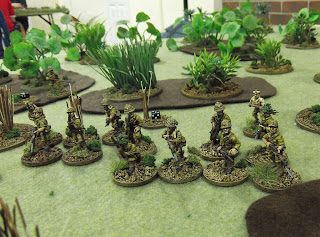 Earlier in the week Ian asked me if I could give him a trial game of Bolt Action, as usual I was happy to oblige so turned up at 'the Polly' with a few boxes of terrain and couple of boxes of figures.

We decided that we would use 500pt forces and play a random mission. We rolled off and I would be playing the British, so used: 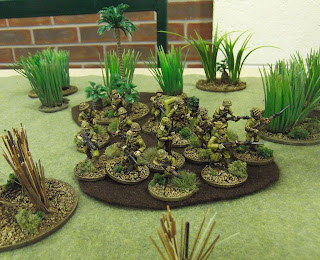 Ian chose to use

Everything was regulars apart from the Gurkhas.

A mission was rolled up and we would be playing Envelopment, Ian won the attacker/defender roll so I explained to him that as I had the Preliminary Bombardment rule, it was probably in his interest to chose to be the attacker.

The game progressed quite well, Ian learned the vagaries of the movement sequence when a good run of order dice for him resulted in him being able to shoot up one of my infantry sections with a combination of his infantry, light mortar and MMG before I drew a die that section was down to just a single man.

Ian also had a good start on ordering units with Pin makers on them, his first two command rolls were blunders. 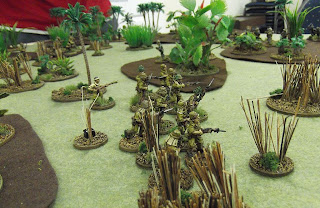 It did not all go Ian's way though, when my artillery arrived it did for his Lieutenant and the three units around him were all on 3 pin markers.

By then end of the game, Ian had killed my light mortar and I had killed his Lieutenant. The judicious application of pin markers on his troops just outside my deployment zone and the failure to roll for a seventh turn meant that I just bagged a draw!

Posted by Paul Scrivens-Smith at 07:04