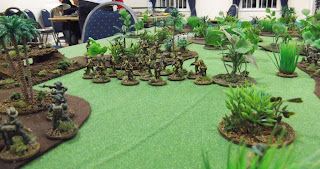 Quinton and I had another game of Chain of Command yesterday evening. We have had a few games now and are getting quite good at remembering the rules, or if not the actual rule then how to find what we are looking for in the rule book.

We decided to throw a couple of new things into the game, and had a try at the second scenario 'The Probe'. I would be using a standard British Infantry platoon from the rule, book, where Quinton would use a Japanese platoon picked from my list. With the additional force points I added a Vickers Machine Gun with five crew and an Adjutant.

We rolled for attacker/defender and I would be the attacker. 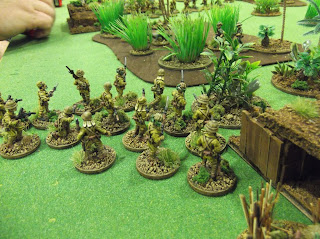 The table was set up as a piece of open jungle with several patches of virgin jungle, and a village in one corner (this was to have no effect on the game), a couple of Japanese pill-boxes denoted the start of a defence line that we were to penetrate.

We got into the patrol phase and it ended up with pretty much a straight line across the table about 24" apart, although I did manage to put one of my jump off points on the far left within about two foot of the enemy base edge that was my objective. Quinton would have to try to ensure that I did not capitalise on this.

I rolled a four for Force Support and picked a Universal Carrier with Junior Leader and Bren Gun, our first foray into using vehicles!

The first turn started well for me with a 1,3,3,6,6 roll for the first phase, I'd be getting another go straight away. I deployed two Rifle Sections and my Light Mortar and in my subsequent phase pushed them both forwards. Quinton had a pretty poor roll, but did get his Grenade Launcher team and Platoon Sergeant deployed.

In my next phase I 'double sixed' again and my first squad pushed on towards the Japanese table edge while the other one took up covering positions. It was looking pretty poor for the Japanese, hardly any troops had been deployed and the British were pushing on towards their objective unopposed.

The Japanese managed to deploy a couple of Rifle Squads to try to block the on-rushing British Section, but one was caught in the open and shot up quite badly by the covering Rifle Section and a recently deployed Vickers Machine-gun. The Universal Carrier had already started it's journey into the engagement and the British Platoon Sergeant had now joined the rapidly advancing Section that by now had over-run one of the Japanese jump-off points. Quinton on his next throw rolled three sixes and the first turn was over and the jump-off point removed. 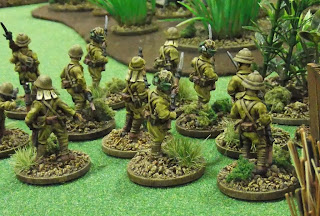 One of the Japanese sections that had been deployed to stop the British push launched a Banzai charge against them, but the combination of withering LMG fire directed by the Platoon Sergeant (and some very lucky dice!) meant that the Japanese were driven off having suffered 12 casualties, while the British only four. Having failed to break up the advance the other Japanese Rifle Section launched a charge against them only the Corporal, three men and the Platoon Sergeant remained, however this Japanese Section had been badly shot up earlier. The plucky British inflicted eight casualties, but in return were wiped out to a man.

What with having lost a Jump-off Point, two Junior Leaders and three Teams of Infantry the Japanese force moral plummeted to four, although the British was now on six. Things were looking dice, although the Japanese had lost a lot of manpower. A lucky grenade launcher shot wounded a British Corporal, gulp, I was now on a Force Moral of four myself. 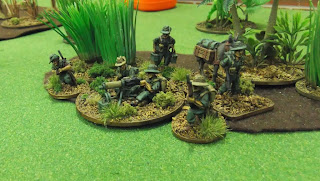 However, my Universal Carrier was chugging along towards the Japanese table edge and some concerted Rifle and Bren Gun fire directed by the Subaltern meant that the Japanese were on Force Moral two and another Jump Off Marker was removed, I chose to leave only the one furthest from the action.

In a desperate bid to stop the Universal Carrier making off the Japanese turned their grenade launchers onto it but failed to score any hits. The Carrier gunned its' engine and exited off the Japanese edge, a victory to the British.

Another great game of Chain of Command. I hope to have enough Afrikakorps painted to start having a go in the deserts of Northa Africa soon.

All the figures and terrain are from my collection assembled and painted by myself.