Finishing off the second box of Desert Rats 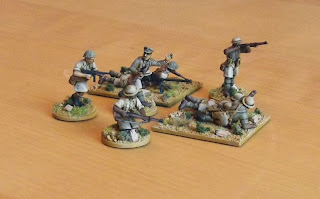 This week I put the finishing touches my the last eight Perry Miniatures Desert Rats from the second box I had been working on. This brings me up to two platoons of 38 figures painted.

While painting these I also painted the crew figures to go in the Honey Stuart and Matilda II tanks that I have been working on.

These figures are a British Officer and Platoon Sergeant, two Indian Runners, and Indian crewed 2" mortar and an Indian crewed Boyes anti-tank rifle. They were painted using my standard method of painting Indian infantry, apart from the flesh on the two British chaps and the tank crews which was worked up from a base-coat of Vallejo Medium Fleshtone highlighted by adding Vallejo Ivory. 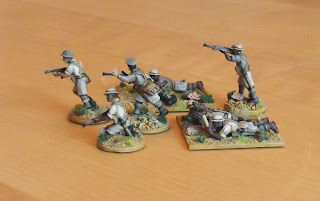 Also, on the painting table at the moment are a pair of Vickers Machine-guns and a pair of 3" Mortars. It's probably about time to unleash them on James's Italians. I know that Quinton is also collecting AfrikaKorps so I don't think I'll be short of opponents at the club.

Here are a few close ups of some of the figures:

Posted by Paul Scrivens-Smith at 06:47