Chain of Command with Eds

Being the Easter Bank Holiday weekend we always pop down to London to see the Fulham half of the family and while there always try to set up a game with chum Eds if he is not jetting off somewhere on business. Fortunately Eds was available and at Salute last weekend I arranged to introduce him to Chain of Command.

Had a lovely cocktail in Beaufort House on Kings Road yesterday with Victoria and my daughter Jasmin and a rather spiffing 'spread' tea yesterday evening with the family.

This morning I loaded up the car and drove the short distance to Pimlico and pitched up at Eds apartment. He had already set up a table and I put out some terrain and went through some of the basics of the rules. I suggested that Eds took the Regulares as despite the seeming disparity in numbers he would have a much better game of it. 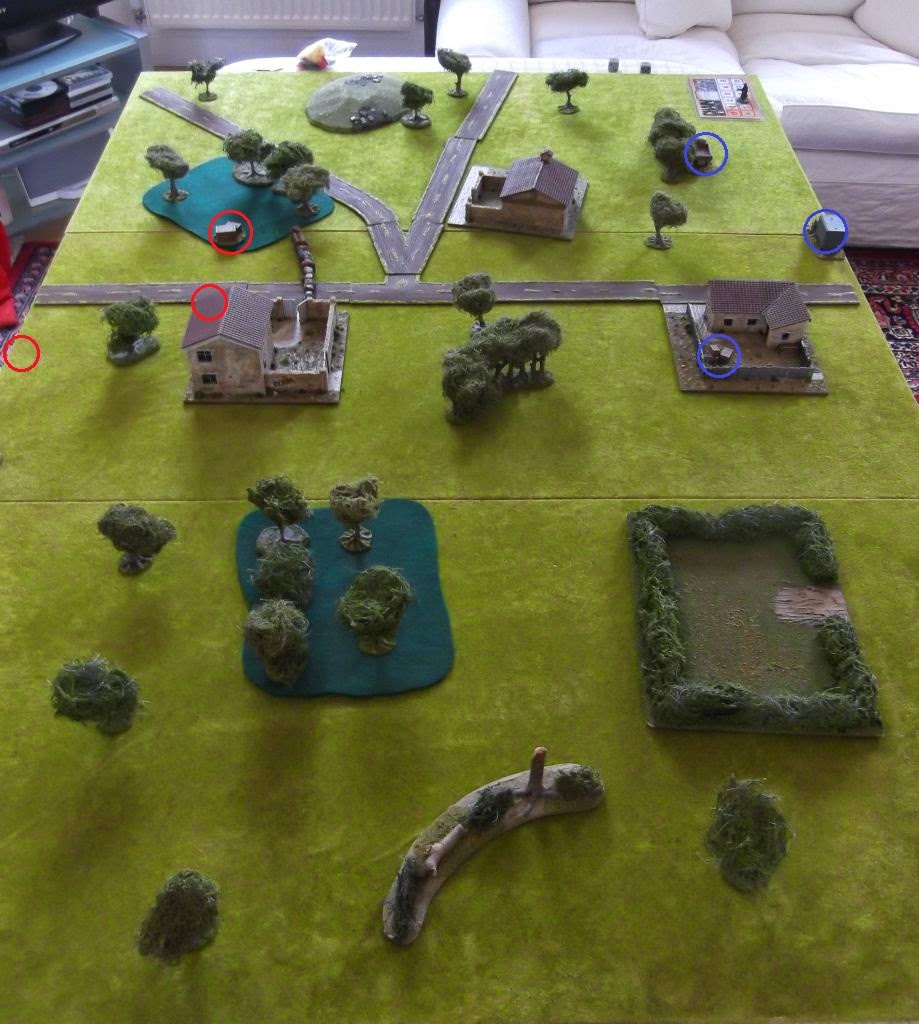 I split out the 10 additional Milicianos by adding one to the section with the LMG and three each to the other three sections.

We set up for the Attack & Defend scenario and played through a few phases (basically until Eds learned a few lessons of the system and had ran out of figures) and then set them all up again and started over for a 'proper' game.

We rolled for Force Morale and I would be an 11 to Eds 8, not a good start for the Regulares. We played out the patrol phase and the initial Jump-off points are shown on the image to the right (Republican red and Nationalist blue).

Eds threw a five for supports and chose a Panzer IA (3) and two teams of Engineers (1ea). I spent my two points on an Adjutant (1) and a section of Entrenchments (1). 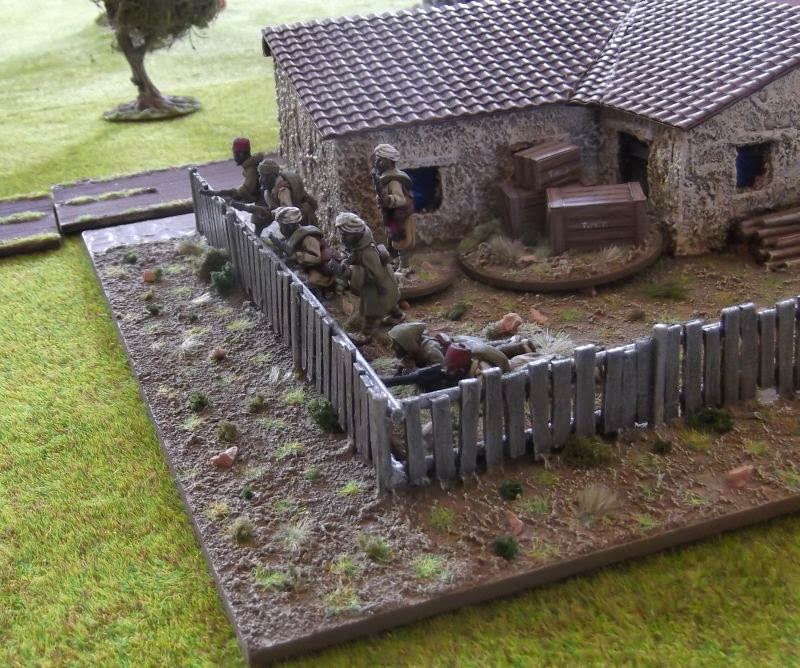 Eds played the Regulares pretty much as I do, sticking the Panzer up the middle to keep me from redeploying and then manoeuvring around the flanks with the infantry sections. Using his Teinente he added the two small teams of engineers together to make a larger team and sent those and one section of infantry up his left flank, while the Sergento Primero added the HQ runners to one of his rifle teams and made a wide flanking manoeuvre on his right flank.

I had deployed my LMG section in the middle and had nothing much to do with it. One flank was secured in a small orchard and the other in a large walled building.

To counter the thrust by the Sergento Primero to my left I moved my Bilbao to block them but it was driven off by very effective LMG fire from the Moroccans. Soon the section I had deployed in the house was getting shot to shiney by the Panzer I and concentrated fire directed by the Teniente. To make matters worse, the Sergento Primero led a bayonet charge and cleared a section out of the woods, the Milicianos breaking and fleeing from the game. My left flank was looking rather open and my right rather thin. The Jefe ordered the LMG section into the building and deployed his remaining section in the woods, time for some "No Pasaran!"

The Bilbao returned to my left flank and after a sharp fire-fight destroyed the LMG team, however some nifty die rolling meant the Nationalist Force Morale was unaffected. Things were looking bad in the house on my right, despite combining the survivors of the original section with the LMG section and me holding the hard cover I was rapidly losing the exchange of fire. The Jefe was also hit and lightly wounded. 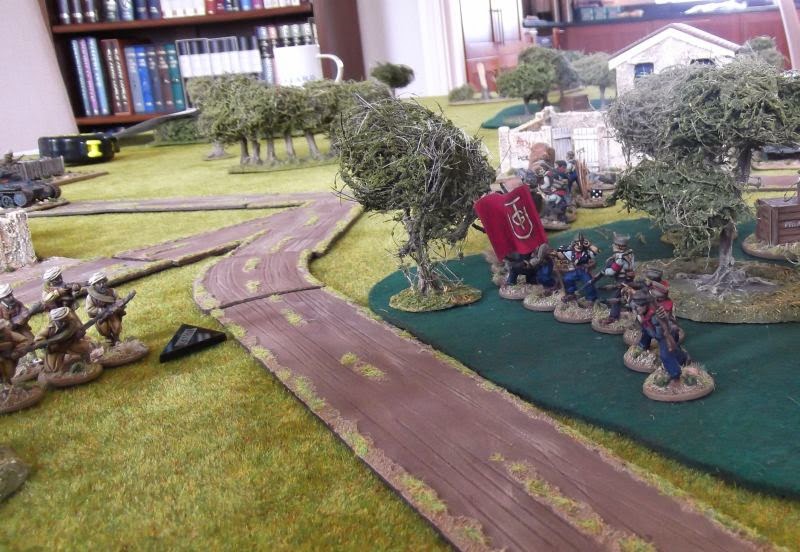 Eventually things gave way, twice in quick succession Eds maintained the initiative for three phases and the fire was telling. Having reduced my left flank to the Jefe and seven men he launched the Sergento Primero and half a dozen Regulares in a charge. I was soon falling back broken, on my right the troops in the house were likewise broken, I was having little comfort in having killed the Sergento Primero outright!

Eds played his ace card, and used a Chain of Command dice to end the turn meaning that my Jefe was still with the broken section and therefore routed. The subsequent Force Morale rolls had reduced me to Force Morale 0 while Eds was on a respectable Force Morale of 5. Game over and victory again to the Nationalists.

What with everything I did not get many photos of the game.

All the figures and terrain are mine and painted by myself. Figure-wise, pretty much everything apart from the trucks is available from Empress Miniatures.

I'm giving Mog a try out with these on Tuesday so that should be the next report.

Posted by Paul Scrivens-Smith at 15:03