War of the Spanish Succession Dutch, English and French(1)

It's been almost a year since I added anything new to the War of Spanish Succession collection, but having got a bit bored of painting the ACW stuff of late I dug into the lead mountain and pulled out some of the Baccus 6mm stuff.

I've not got any English horse in the collection so firstly a squadron pair from Wyndams' horse. 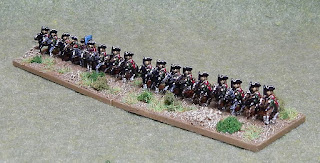 Next some Scottish dragoons, a squadron pair of Hays' Dragoons - later I realised they should all be mounted on greys as these were the predecessor of the Scots Greys, whoops, I shall have to pretend they are on remounts! 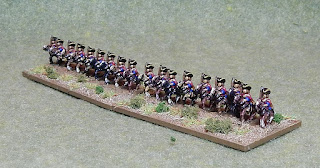 The French see the addition of a battalion of Crussols' foot. Looking at the standards I need to do a bit of touching up around the edges.

This time last year I painted a single base of the Diesbach regiment of Swiss in Dutch service, this week I painted the remaining two bases, one of the standard poles was quite miscast, so one base has an officer with half-pike instead.

Here they are completed with the third base.

I also painted two more bases from the Dutch Ostfreisland Regiment, allowing this to be fielded at full strength in our next game.

Lastly another three bases of sheep were added to the baggage.

We are playing Black Powder on Thursday again, last time we tried these for the WSS I was not so impressed, hopefully a good win over Belgium earlier in the day shall put a gloss on them :)
Posted by Paul Scrivens-Smith at 13:20