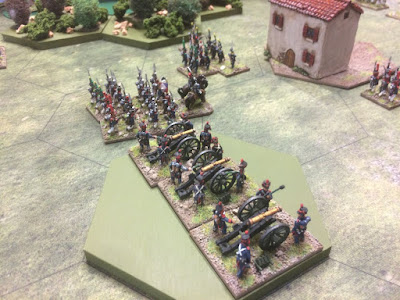 I thought it would be good to spend a day with long time gaming buddy Steve when I was back in the UK and he is usually free in the week so we planned a game on the Monday I was 'oop norf'.

Steve has been a big fan of using the Command and Colours Napoleonic set as a figure game on a custom hex mat from Deep Cut Studio. 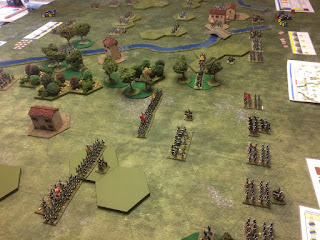 Steve has long had a large collection of French, Russians and Austrians in 15mm but the Peninsular British are a new addition to his collection, some only having been completed before the game.

Steve had setup the game before we arrived using the Battle of Vimeiro scenario. 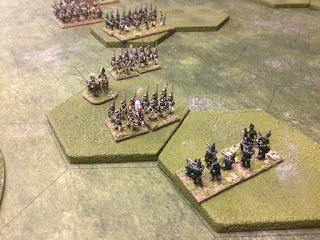 At the outset it was just Steve, Nick and myself but others were due to arrive as the game progressed. Nick took the French, myself the British & Portuguese, while Steve jollied things along. 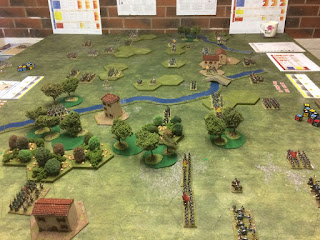 Tim arrived and joined with Nick playing the French as the action progressed in all sectors of the battlefield.

Things were looking decidedly dicey on our left with the British and Portuguese on that flank pushed back and under heavy attack. We continued to consolidate our position in the center hoping to move against the French left and were in an good position when we were joined by Martyn and broke for lunch. Martyn declared for 'Team France' and Steve joined me in leading the British.

Soon the hammer was falling on our right around the town of Vimeiro with the strong French forces on that flank committed while the push continued against the British and Portuguese on our left. 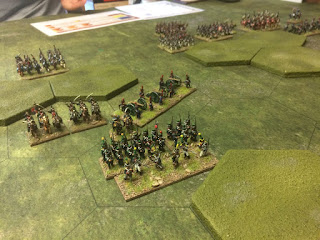 On and on came the French in a relentless attack and soon we would lose at the start of the next turn, but a counter attack on our left captured the objective and both sides had one point of morale left each.

A British battalion on the right that had been reduced to one stand, rallied back up to three countered against a similar sized unit of Frenchmen, in a do or die moment we broke the French unit and took of the last morale counter. Victory to Wellington, but only just!

Posted by Paul Scrivens-Smith at 06:23