As well as working on the 6mm ACW collection I have also been painting more WWII Soviets, last Sundays game showed a shortage of Soviet riflemen in my collection so I made a start on some of the BAM ones that chum Tony traded for painting those recent Vikings.

There are some great figures in this range although it looks like these were cast from 'shot' moulds as there was a lot of cleaning up to do. Unfortunately, like the Assault Group ones I have already painted they are a again later war figures with lots of shoulder boards and Pps-43 but they are on hand and I'll crack on with what I have while I save my pennies for an order from Crusader.

One small blessing is that they are pre-Warlord Games acquiring the range and taking a hacksaw to the heads or withdrawing them completely.

This painting session saw four riflemen and a DP-LMG team added, I must admit I'm not entirely sure if that second figure from the left is actually a Soviet, but he was painted and added anyway. I like to base a few of the figures in pairs, they also make good Patrol Markers for the Chain of Command games.

Again this session I painted three officers to add to the collection. These are all great casts with bags of character, I particularly like the chap on the left and I think the chap in the centre will make a great marker for the Force Morale table, although I also like the idea of using the NVKD officer in the right to track morale. 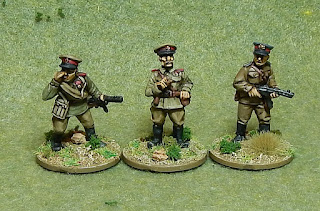 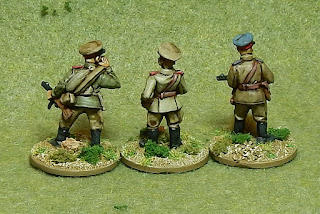 The last two figures in this batch were a couple of the ladies, a Medic and a sniper in amoeba pattern one-piece. Great figures by Paul Hicks. 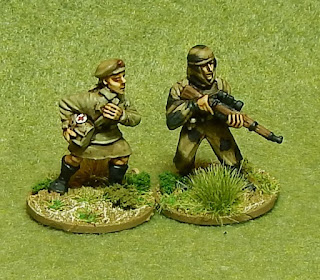 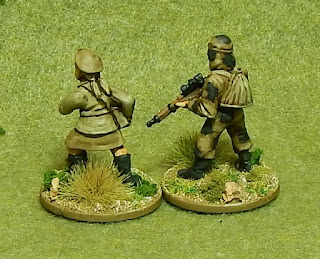 Posted by Paul Scrivens-Smith at 11:44