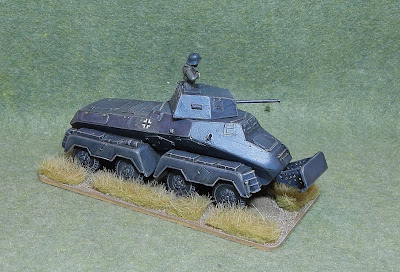 It's bonus round time over at the Analogue Hobbies Painting Challenge and the theme is Reconnaissance. I must admit that I wasrather at a loose end for what to do for this bonus round, I'm trying to concentrate my focus on the Hundred Years War collection and did not have anything suitable for that, likewise for the American Civil War collection, I could have done a cavalry patrol but did not have any spare figures that would do for what I wanted.

However, buried in the pile of shame was this Sd. Kfz, 231 (8-rad) that I had taken in trade a few years ago. It was much unloved and missing a few bits, for example, I fashioned the 20mm cannon from a spare Perry Miniatures medieval spear and the hatches are clipped from cereal box cardboard. 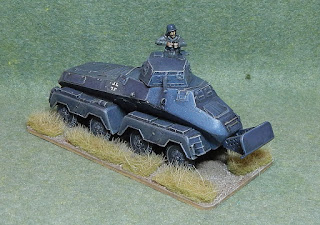 There was also a tatty base-coat of Panzer Grey so this was cleaned up and re-applied then the whole lot was given a wash with 'Secret Weapon Soft Body Black'. Once that was dried I painted in the panels using Vallejo German Grey, then added a couple of highlights by adding successively more Neutral Grey. The wheels and tools were picked out and then a couple of Balkenkreuz decals added.

The crewman had a 'rush-job' and was stuck in the turret. 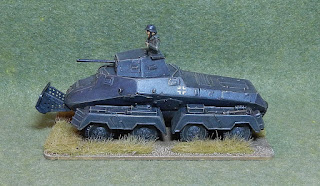 This thing is a beast, it's cast in white metal and while doing the decals I put it on the scales - it came in at over 350 grams! There was no way this was not going to get a magnetised base, otherwise put in a box with any other figures the slightest slip would result in carnage. So I grabbed a Warbases 120mm x 60mm and textured it and painted it Field Drab then drybrushed with Iraqi Sand then Pale Sand.

The armoured car was then glued onto the base with copious amounts of superglue and I went to town to muck it all up with a Tamiya weathering kit. 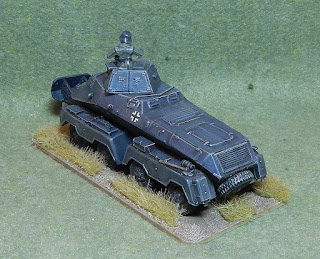 I wondered what to do with the base then remembered that I has some Noch wild-grass foliage, so as my little joke decided that an armoured car the size of a bus should be trying to hide in the long grass.

Schwerer Panzerspähwagen translates as "heavy armoured reconnaissance vehicle" I don't see it as much of a stealth approach! 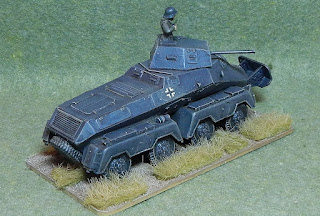 It's a pretty horrible model, but an hour or so work has taken about a pound of metal out of the lead mountain. 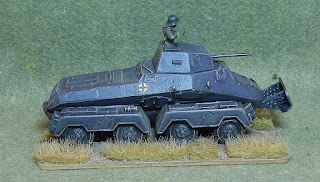 The Analogue Hobbies Painting Challenge entry can be found here.
Posted by Paul Scrivens-Smith at 15:41