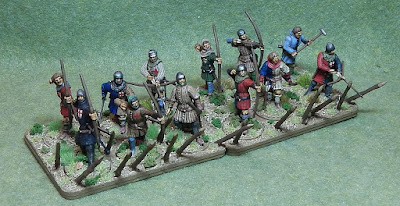 The first set is another block of 12 bowmen deployed behind their row of stakes that were used to disrupt the French attacks and protect these lightly armoured troops. These stakes are included on the frames of the English Army 1415-1429 set. 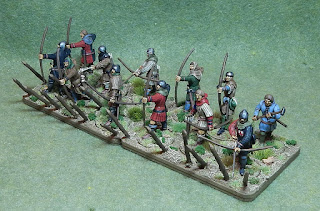 Like the previous set of English bowmen they are made with a mix of the bodies from the French box so that there are some chaps with heavier armour than those made solely from the English set. The French box also contains a few un-armoured bodies in different poses to the English box to add variety. 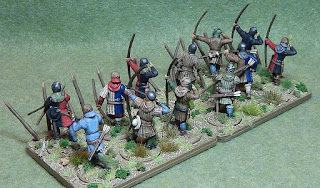 I have painted these troops in a mix of liveries representing archers from several retinues grouped together. The stakes on the base are a useful addition, some may critique the 'what if they move' but at Agincourt the English picked up their stakes and advanced to within bow range of the French line. 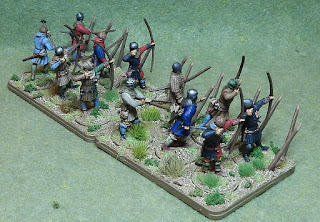 Some close-ups of the individual figures. Many are sporting the cross of St. George that was used as a field sign through the campaign of 1415.

All but the third figure from the left and the last figure in this group were made using French bodies. The one on the second right is a very dynamic pose in the French set that adds some action to the group.

Only the first figure in this group uses a body from the French set the remainder are all from English bodies. I like the green & brown livery so much I plan to paint a whole unit of French spearmen in this scheme, and they shall hopefully be finished this week.

The second group of six archers could either depict a small unit of archers deployed among the men at arms in the centre of the English line, or, if deployed in a more open order a unit of bidets skirmishing on the flanks of the battle. 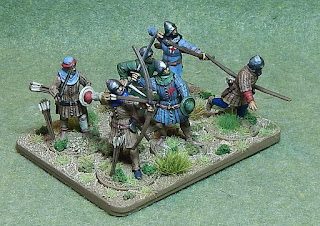 Again a mix of English and French bodies painted in a mix of liveries. 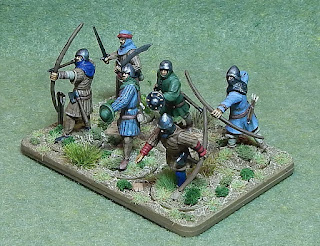 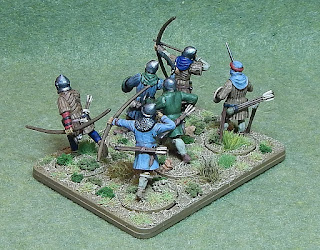 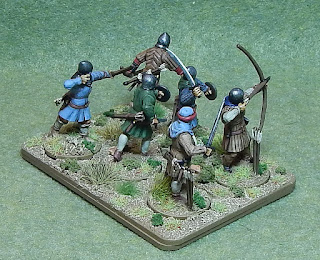 Again close-ups of the group of six, the two figures on the left are entirely from the English set, the remainder a mash-up.

I also knocked up some blank bases and bases of stakes to either allow casualty removal, or to allow me to make the figures stretch a little further and field a few more units.

I'm now out of bowmen so shall have to concentrate on the French again next week.
Posted by Paul Scrivens-Smith at 12:01