Agincourt using To the Strongest! 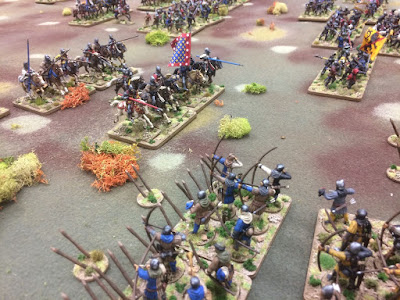 On Friday I ran my Agincourt game at the local Danecon wargames event, a great opportunity to get out the collection that I have been painting these last nine months. The first figures were started on Agincourt day and that tentative first post is here.

So, nine months later I can put 36 units in the field along with other hangers on.

Working on the scenario for the battle I had to use some imagination and a flexible approach to unit size to achieve the look I was aiming for. So, for example the 900 English men at arms were represented by 4 units while the 3000 bowmen by 10 units. For the French the stretch was even more flexible, with 18000 men at arms represented by 18 units and the 2000 archers and crossbow represented by 3 units.

Also the commanders given did not necessarily fight in those places during the battle, for example, Sir Thomas Erpingham may have given the order for the archers to commence shooting, but he fought with the men at arms.

The full lists I used are here if you have trouble downloading let me know and I'll try and share another way.

I wanted the battle to feel quite claustrophobic so we played down a table of only eight boxes wide with woods and the town of Agincourt to further constrain the French on each flank. This mean that even though the French massively outnumbered the English they would never be able to bring force to bear along the line and must get in their own way all the time.

We were using the To the Strongest! rules but, I also wanted to represent some of the flavour of the day and adopted some additional special rules:

Henry V is a great leader. A great leader's exceptional qualities enable him to play two replacement activation cards or to-hit cards in a single turn, rather than the usual one. Great leaders are also exceptional warriors and when wounded, play two injury cards and pick the lowest.

The French unit of Men at Arms carrying the Oriflamme can always redraw the chit if they fail to make a charge move.

It played our rather well, the French came on slowly, as could be expected from trying to push men at arms through the muddy field. They charged and charged again at the English lines only to be pushed back and then both sides pause to rally and gain their breath.

Rather than luck than by any planning the French men at arms bearing the Oriflamme were the first unit into the English lines and also the first unit to be lost. The Count de Fauquemberques led a mounted charge and one unit of English men at arms was destroyed although the count was killed by the supporting archers. On the English side, the Duke of York fell and as well as Fauquemberques mentioned above the French also lost the Marshall of France and many other nobles.

Chad is renowned for having terrible luck with dice and we had hoped that the use of chits may have alleviated that, it seems that any way of randomly generating numbers is not on Chads side.

The English started the game with 80 ammunition markers for firing their arrows and finished the game with six and with all supplied exhausted but no single French unit was destroyed by bowfire and the English men at arms had to do all the heavy lifting.

We eventually had to call time on the game with the English having lost 6 from 12 victory medals and the French 10 from 22. I think the English were in an advantageous position, but Chads terrible luck with the chits had meant that the English archers on the right flank with no meaningful French opposition before them were not able to turn the French flank.

I think that if playing again, I would not make any of the French men at arms veteran, just leave the English as such. Making the first four French units have such a high save probably meant that they were a bit too good and hung around too long meaning the French casualties were not high enough.

Here are some images from the game.

Posted by Paul Scrivens-Smith at 08:21