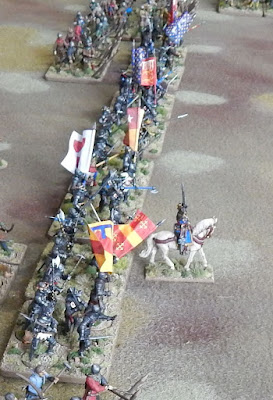 To get prepared for next weekends game I wanted to make sure that I had an idea of how it should all fit together on the battlefield so I laid out my table and put all the forces out. 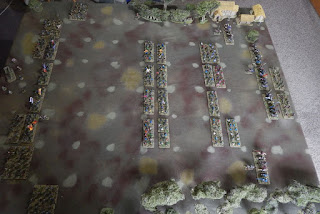 My table at home is only 5ft x 6ft so my game at Danecon shall be a little more elongated with space behind each of the armies and with the English camp set further back.

This view is of the three French battles arrayed in waves, I wanted it to feel quite claustrophobic for the French so they are deployed narrow and deeply with the men at arms pointed at their opposite English numbers/

This is the first French battle, two divisions of men at arms thirsting for victory and glory.

The second French battle of men at arms supported by crossbowmen and pavisers.

The third French battle, mounted men at arms with some spear armed levy bringing up the rear. 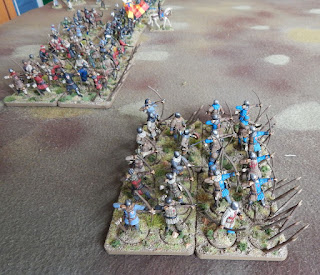 The English right, made up of bowmen deployed behind stakes. 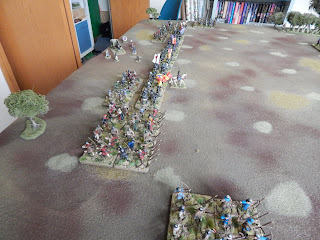 A view along the English line, a thin line of men at arms in the centre with longbow deployed on each flank. 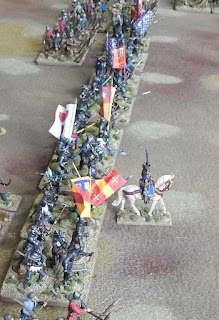 Henry V mounted on a small white horse enthuses the array with some rousing words on the theme of the St. Crispin and St. Crispian 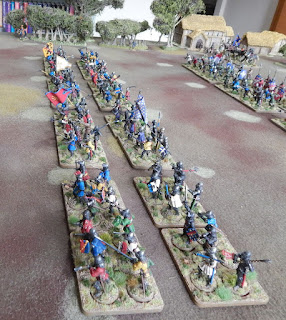 View along the lead French battle with the Oriflamme in the van. 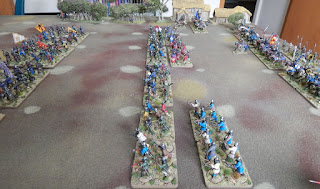 View along the second French battle with men at arms supported by crossbowmen. 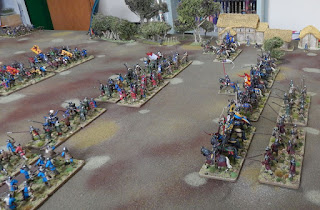 The third French battle, mounted men at arms to thrash the English to bloody ruin.


This day is called the feast of Crispian:
He that outlives this day, and comes safe home,
Will stand a tip-toe when the day is named,
And rouse him at the name of Crispian.
He that shall live this day, and see old age,
Will yearly on the vigil feast his neighbours,
And say 'To-morrow is Saint Crispian:'
Then will he strip his sleeve and show his scars.
And say 'These wounds I had on Crispin's day.'
Old men forget: yet all shall be forgot,
But he'll remember with advantages
What feats he did that day: then shall our names.
Familiar in his mouth as household words
Harry the king, Bedford and Exeter,
Warwick and Talbot, Salisbury and Gloucester,
Be in their flowing cups freshly remember'd.
This story shall the good man teach his son;
And Crispin Crispian shall ne'er go by,
From this day to the ending of the world,
But we in it shall be remember'd;
We few, we happy few, we band of brothers;
For he to-day that sheds his blood with me
Shall be my brother; be he ne'er so vile,
This day shall gentle his condition:
And gentlemen in England now a-bed
Shall think themselves accursed they were not here,
And hold their manhoods cheap whiles any speaks
That fought with us upon Saint Crispin's day.

Posted by Paul Scrivens-Smith at 08:48