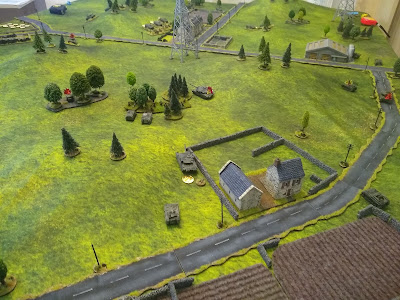 Tired of the constant provocation, today our brave and glorious forces crossed the German border and penetrated deep into the NATO lines.

The British dogs moved their armoured reserves to counter our deep penetration, but their vaunted new tanks were brushed aside. 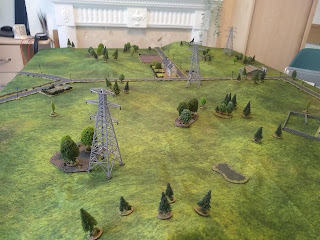 Today Martin and I played our first game of Seven Days to the River Rhine, I laid out some terrain yesterday and Martin bought along some very nice extra pieces, so we had pylons, fields and an industrial unit to also fight over.

We would play the Meeting Engagement and randomised that we would be corner to corner across the diagonal. 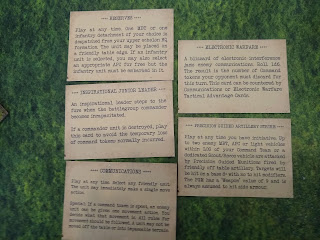 My Soviets were four T-64B, six Infantry sections in BTR-60PB, one Saxhorn team in BTR-60PB, two BRDM-2, one BRDM Spandrel, one ZSU24 Shilka. I had the following Tactical Advantages: 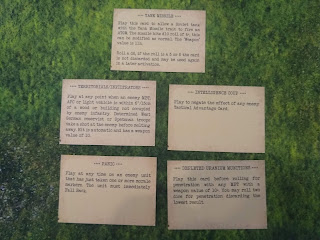 Having decided what should be in our reserves, the British took the initiative on the first turn and pushed up their Challengers and recce units. 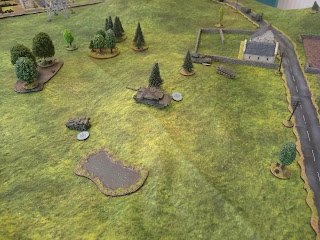 The Soviets countered by grabbing some ground with their armour and deploying the Saxhorn team on a commanding hill. 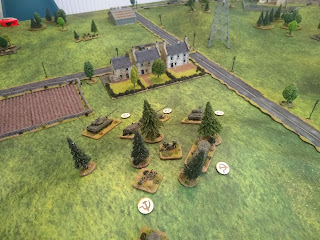 I thought it would be a good idea to mark my Battlegroup commander by accompanying his T-64B with a BRDM-2u command vehicle. 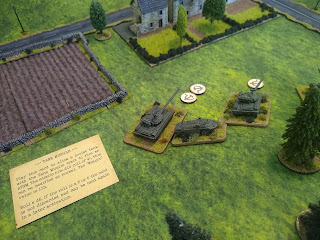 First blood went to the Saxhorn team, the British pushed a Scorpion into some woods and attempted to call in Precision Guided Munitions on the Soviet tanks but this was countered by a Soviet Intelligence Coup, then the Saxhorn successfully activated  for a third time and destroyed the British light tank. 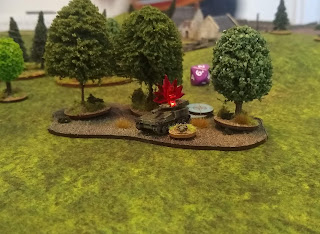 With first blood to the Soviets the initial turn ended.
The Soviets pushed their armour up into the shelter of the row of houses one of them taking up an advantageous firing position. 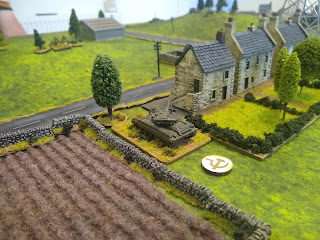 A Challenger moved up the road to counter this and Kaboom! was taken out by the first tank shot of the game! 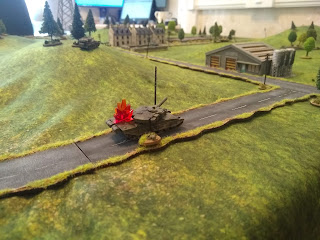 It did not go all the way of the Soviets though, by next turn the British commander edged his challenger around the woods and deadly fire destroyed a T-64. 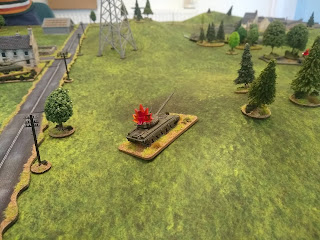 At this point we took a break for lunch, sausage sandwiches if you are interested ;)
A Swingfire successfully hit the T-64 that had taken out the first Challenger, but the armour deflected the missile, the return fire was deadly against the light vehicle. 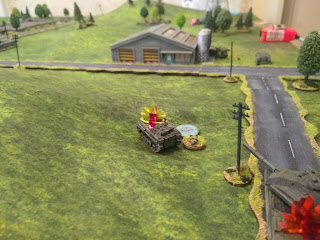 The commanders Challenger was in a very advantageous position on the edge of the woods, the Saxhorn team had a clear shot, but, the Chobam armour should easily deflect the missles warhead, it was certainly my day for the dice, having got a hit, I rolled double nine for the penetration and another Challenger was done for! Fortunately Martin had the Junior Leader Tactical Advantage and the loss of the tank was not compounded by the usual additional setbacks. 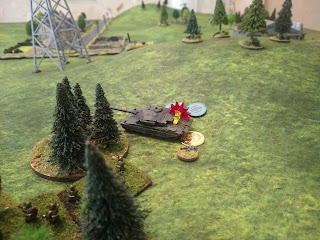 To add to the ignominy the BRDM Spandrel whacked the third Challenger putting enough hits on it to force it to retire.

By now we were both bringing on our reserves, a Motor Rifle platoon was rushed up the table and deployed in support of the Soviet tanks. 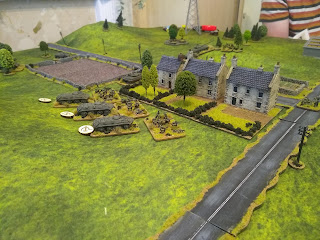 The Soviet commander grabbed one of the objectives, but was quite badly shook up by Carl Gustav fire from the woods before him. Concentrated fire from the command tank, another T-64 and the Shilka eventually drove the British infantry back, but not before a Scorpion had plugged one of the supporting BRDM-2 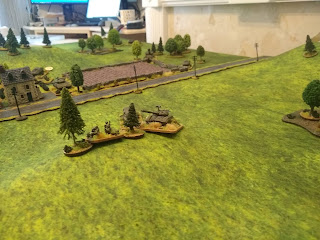 There were reports of a mushroom cloud in the distance, but they were wrong, it was blueberry muffins and coffee for our desert, thanks Victoria! 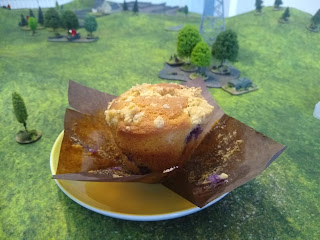 The Milan team were deadly and took out the newly arrived T-64B that had come on with the reserves. 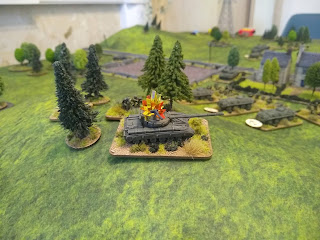 Having already dealt with two of the three Challengers it was quite unsettling when Martin played another Tactical Advantage and whistled up another of the armoured beasts that advanced up the table and easily dealt with the BRDM Spandrel. It was now two Challengers against two T-64 and I was not so keen on those odds.

There was a large ridge across much of the deep table, and the British were massing a strong force behind it. I pushed up one of my infantry sections along the road, and on their third consecutive action they blasted away at the second Swingfire, failing to penetrate it, they had a fourth activation and plugged it dead! 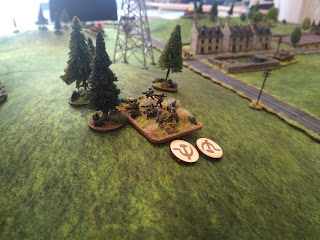 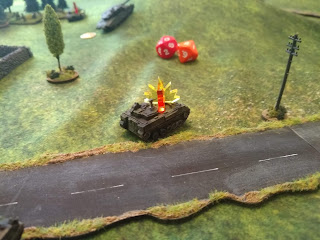 The next turn this infantry section took out the final Scorpion with their RPG-18, and when some British infantry moved to counter them, they fell back into the industrial unit. 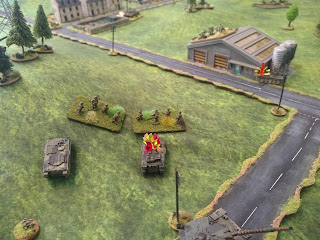 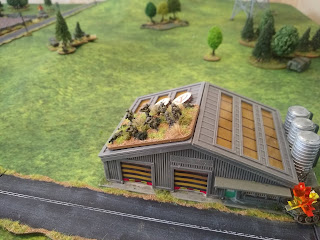 One of the remaining Challengers (the one forced to retire by the Spandrel earlier), with the new British commander on board, crested the large ridge and started a one-sided duel with my command tank, hitting it twice but failing to penetrate. A battle group moral test saw my commander remove all the counters and then a deadly return fire destroyed the Challenger. With the loss so far of three Challengers, two Swingfire, two Scorpions and their commander the end of turn roll saw the British retreat from the field.

The Soviets had lost two T-64B, a BRDM2 and a BRDM Spandrel.

Martin had some terrible dice both for activations, reactions and armour penetration. The Saxhorn team, probably my man of the match, had been targeted constantly by the FV432M and although they were by the end of the game on a 3+ to be hit had still never suffered a hit! 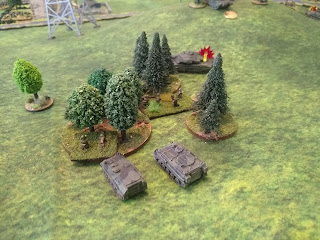 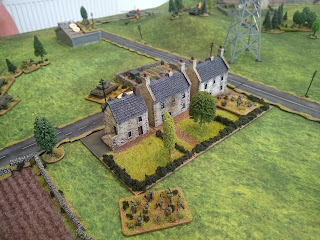 These chaps had deployed in their BTR-60's at the start of the game, and never been activated over the six turns, just contributing their chits to the greater good! 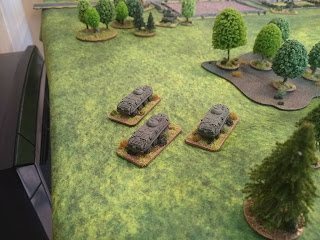 Martin and I have been preparing for this game since I was still in Wisconsin and it was great to finally get all the toys and terrain on the table. I'm sure we did plenty of things wrong in this first game, but it certainly did not disappoint.
No doubt there will be a slightly differing report in the Sun, published over on Martins blog.

Posted by Paul Scrivens-Smith at 12:54
Email ThisBlogThis!Share to TwitterShare to FacebookShare to Pinterest
Labels: Battle Reports, Seven Days to the River Rhine