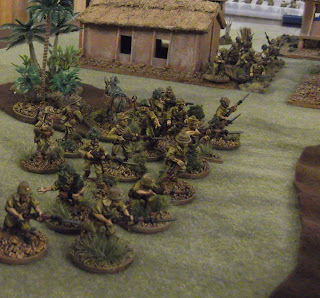 Tonight I played my first game of Bolt Action in a long time that did not involve pitching my Japanese against my 14th Army. Steve fancied giving his newly painted Soviet troops a run out so my Japanese would take them on.

As we would play on a 4ft square table, we settled on 800pts per side. Steves Soviets were:

We set up terrain on my new 4ft sq Hotz Mat and then rolled up the demolition scenario and used the newly painted 14th Army mules as the objectives.

Steve chose to deploy his HQ, inexperienced section, a regular section and mortar, I started with two sections, MMG and my HQ, this set-up was to be a decision Steve would regret. 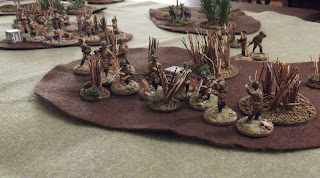 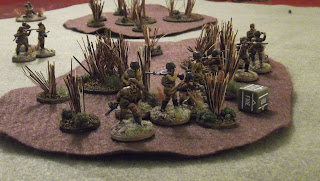 The game started well for the Japanese, the inexperienced section got too close to a Japanese section and was carried away in a Banzai charge and soon I was pressing on towards the objective with two squads each at quite a high strength. The T34 Soviet had some terrible rolls to come on from reserve and did not appear until the sixth turn, although by this time was able to come on very deep down the table and did get very close to the Japanese objective. We rolled up for the seventh turn, two Japanese infantry sections were close enough to the Soviet objective to get a win, but both were carrying pin markers and in the end both failed their motivation checks. The Soviet T34 also did not have sufficient movement to reach the Japanese objective. It would be a draw, slightly in favour of the Japanese as the Soviets had lost three elements and the Japanese had lost none. although one Japanese section had passed a moral test on a '3' much to Steves dissapointment.

I think in future Steve will be starting his T34 on the table.

The figures are from mine and Steves collections, all the Soviet infantry are from The Plastic Soldier Company and the T34 is a Hobby Boss model, the Japanese are all from The Assault Group.

Another game of Bolt Action this evening, I hope to get that posted up tomorrow.

I did take quite a few photos, but they were all pretty dark. 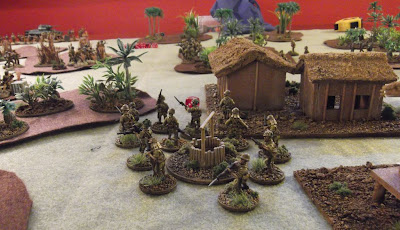 Posted by Paul Scrivens-Smith at 03:15