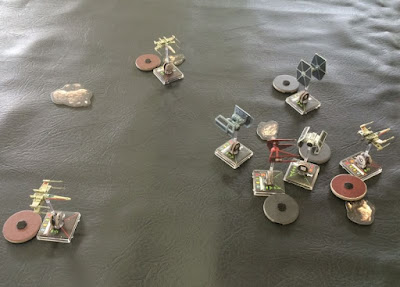 With myself as the Rebels and Greg and Ben playing the Empire it was my first game of X-Wing for many a month yesterday.

We decided on a 100pts per side each  and the Empire forces were: 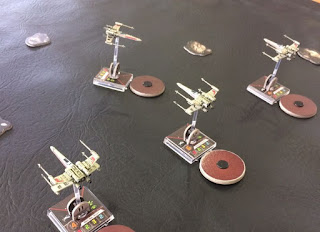 
It was an early calamity as Darth Vader polished off a X-Wing in the first couple of turns and my other two undamaged ones fought hard to fend the remainder off.
Soon the Rebels were scattered and all but the Tie Fighter were able to concentrate fire on the target, however, some brisk maneuvering, some very lucky defense dice and proximity to the table edge on turn five meant that my lucky Red Squadron pilot escaped for a RRebel victory. 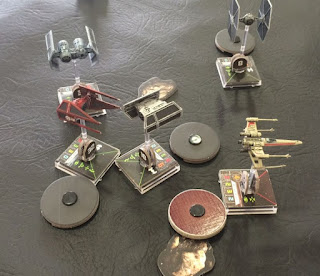 There was still loads of time left so we set up this time and rolled the dice for the mission again, this time it would be Dark Whispers.

The Rebels played cautiously to start with and soon had destroyed the Tie Fighter after it had picked up the first satellite marker. Darth Vader bagged another marker quite quickly and despite a lot of incoming fire only had a single shield removed.
The Tie Interceptor made a terrible error in the manouver phase and left the play area, leaving only the Tie Bomber and Darth Vader himself.
The Tie Bomber bagged one satellite and Darth grabbed another. With his more powerful engines Darth accelerated away from the Rebels gaining a little more ground each time with his barrel rolls and was soon out of range and off the table.
An Empire victory this time. 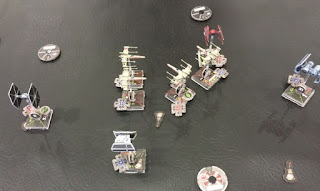 Posted by Paul Scrivens-Smith at 07:20