Atttack on the Amba 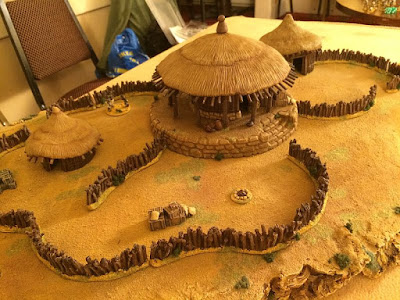 Thursday evening at the Rose and Crown was our first opportunity to try out Chain of Command: The Abyssinia Crisis

James bought along his rather splendid Abyssinia collection of troops, vehicles and terrain and we set up a 5ft square table with a village on an amba off at one end, surrounded by an area of cleared ground then a band of rough terrain.

The amba would be garrisoned by a baluch of Mehal Sefari while a baluch of Italian Askaris from the Regio Corpo Truppe Coloniali would try to evict and destroy them. 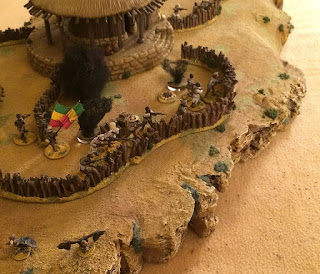 We played a version of the Delaying action scenario, but like our CoC:WWI games made a few changes. As the Mehal Sefari had the advantage of the amba they would only get D6 support, while the Askaris would have 2D6+6 support. The game would also be won if either the Meto aleqa died or the defenders were broken.

Rolling for Force Morale the Askaris were starting on a very creditable 11 while the Mehal Sefari only on an 8, good job they had all that cover!

We played out the Patrol Phase and the jump-off points were placed as per the image below. Rolling for Force Support, the Askaris boosted their force with a Breda M30 LMG for each section and support from a M.07/12 MMG, a 65/17 Infantry Gun and a sniper. The Askaris were used as regulars rather than Green.

The Mehal Sefari were bolstered with a crate of modern rifles and a LMG. One of their number waved the Ethiopian flag. James chose to use them in the 'Modern' organisation. 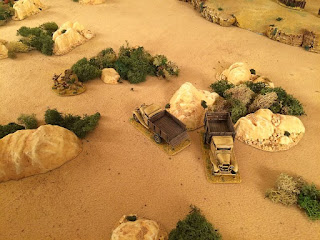 The Askaris took the first phase and soon had a squad taking cover in the rocky scrub, while the infantry gun deployed and scanned for targets. The Mehal Sefari immediately manned the thornwood abbatis atop the amba and opened fire, the first few rounds of the game first wounding and then killing the Italian gunnery sergenti! 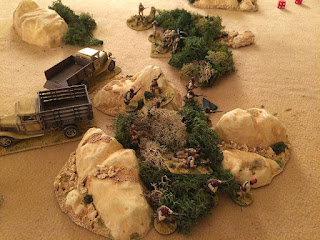 The Askaris were soon to returning fire and the Ethiopian selfegna soon started to fall, the infantry gun was especially deadly, no doubt stirrred into anger at the loss of the sargenti.

The sniper soon joined in, but his fire was ineffective against the Ethiopians. 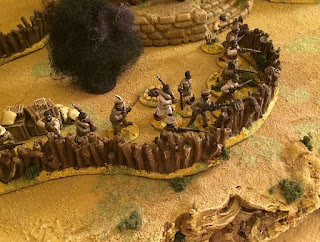 More Ethiopians rush to defend the other half of the village, however the Askaris replied by deploying their medium machine-gun and soon the shock was piled up and the Amsa aleqa leading on that side was wounded. 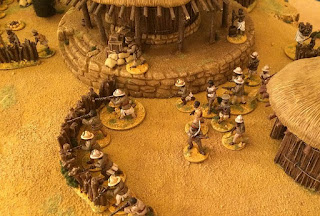 The firefight continued and the crew of the infantry gun were the priority target for the Ethiopians, however, despite the sergenti being dead and two gunners becoming casualties it kept up a steady fire on the amba. 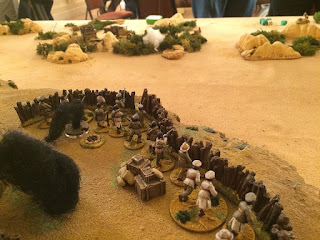 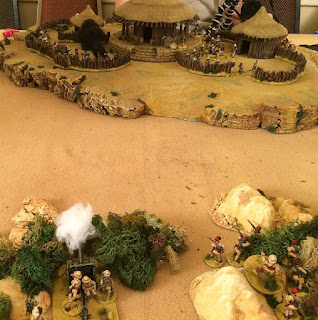 With the heavy fire falling on their right flank the Ethiopians were starting to suffer and it was not before the Amsa aleqa leading on that side was also wounded. The Meto aleqa reaslised that the position was becoming difficult and leapt into action rallying the troops on that flank.

Seizing the opportunity of a double phase the Italians deployed both remaining section of Askaris and moved them into cover closing on the Amba. 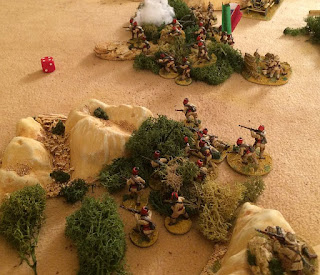 The tenente saw his opportunity, mounted on his snow-white charger he ordered the two newly deployed sections to attack. The Askaris were sluggish at first, reluctant to break cover but soon the tenente was driving them on. 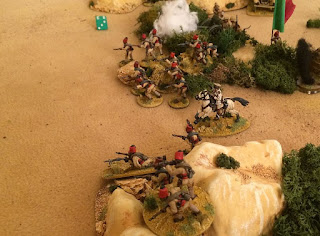 The Ethopians tried to reinforce the thorn abbatis, but deadly fire from the other section, machine-gun and infantry gun caused swathes of destruction.

The tenente was hit, and although the Askaris wavered he was soon driving them on to the foot of the amba. 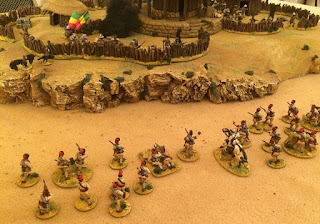 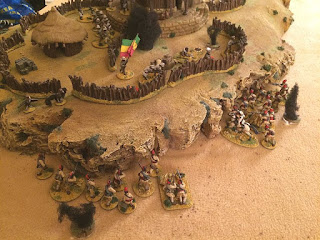 At the foot of the cliff the tenente tried to encourage the troops to scramble up and assault the abbatis, however his initial exhortations were not enough and both sections failed to make any progress (both rolled a move distance of 1"!) so he then ordered the grenades to be prepared and they were thrown among the defenders causing more panic. 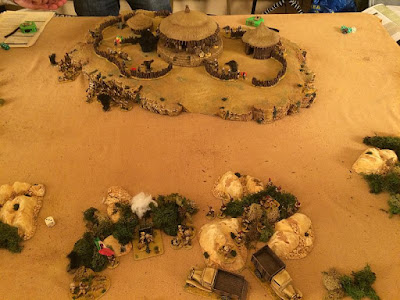 It seemed like the game was up for the Ethiopians, with their morale collapsing and with Askaris fighting at the abatis they retired from the field leaving the amba in Italian hands.

The image below gives some idea of the main movements of the game along with the direction of the main fire-fights. 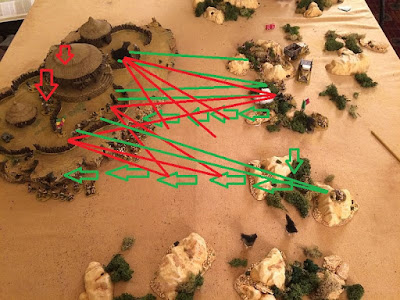 The game played out really well and the Ethiopians suffered from their inflexible organisational structure with no Junior Leaders, so a lot of command rolls of '3' were wasted.

The Askaris were probably a bit over powered with one LMG per section, however, we only had enough models to field them like that, maybe if there had only been a single LMG the Ethiopians may not have been shot up so badly.

Here are more images from the game for your enjoyment. All the models and terrain are from James's collection. 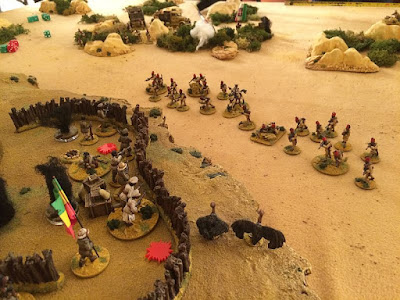 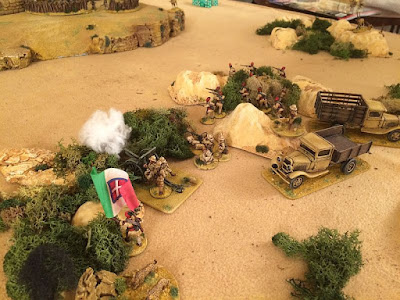 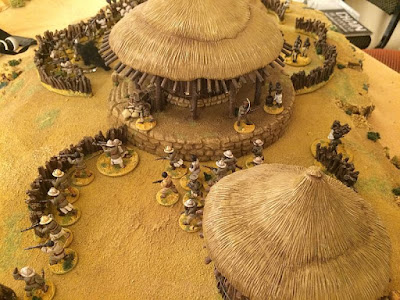 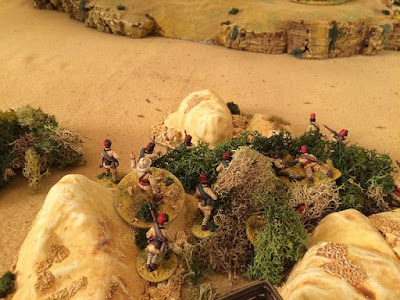 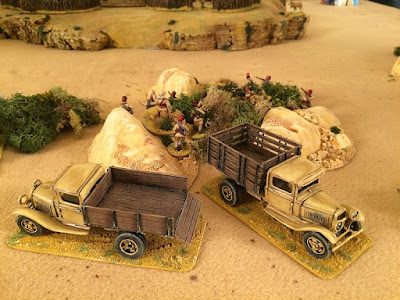 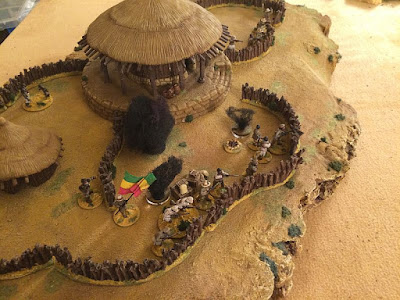 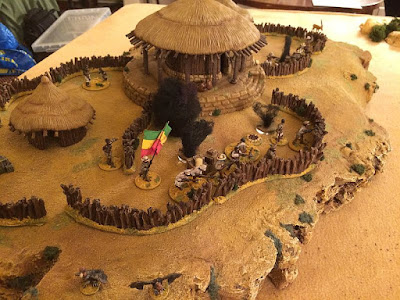 Posted by Paul Scrivens-Smith at 11:49