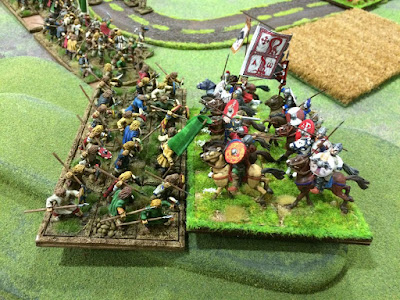 This is a very tardy report of a game I played against Richard a week last Tuesday, so the details may be a bit sketchy.

We fancied a game in preparation for my Age of Arthur campaign day on the 13th February   which unfortunately Richard cannot now attend as he is off on his holidays.

I picked a pretty standard Early Saxon Kingdoms force of Cynning, Atheling, Thane, Scop and Wiglera leading a unit of Gedricht, two units of Duguth and a unit of Geoguth. Support was provided by a small unit of skirmishing Duguth and two units of peasants.

Richard fielded the sample Vortigern list from the Age of Arthur book, making up the extra 100pts by bolstering the cavalry unit. 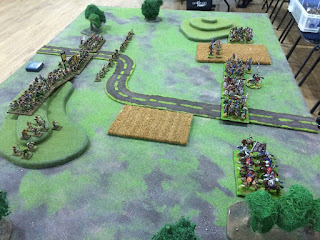 Both armies deployed, the Romano-British with their Pedyts in the centre with their flanks anchored on two fields of crops, Vortigern took the cavalry on the left. Heignst was on the far right with  his unit of Geoguth while Horsca and his Geoguth supported the Pedyts. 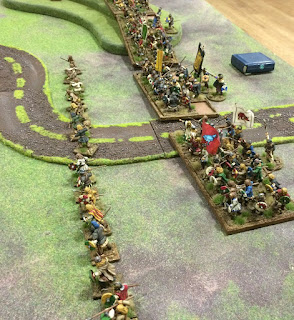 The Saxons formed a solid line with the Gedricht in the centre flanked by Duguth while the Geguth were on the right.

Opening the action the Romano-British slingers caused the Saxon javelinmen to flee the field, a great start for Vortigern whose troops began a general advance.

The Saxons countered with a surge of their own, unfortunately due to their warband rules, not necessarily in the intended direction! 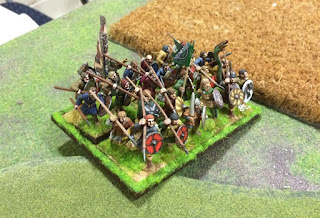 Battle was joined, Vortigerns slingers kept up a great hit rate causing much consternation in the Saxon ranks. The Roman cavalry crashed into the Geoguth and after a protracted combat scattered them to the winds riding around the rear of the Saxon army.

Horsca and his Gedricht were involved in a combat with my Duguth on the left flank that lasted almost the entire game until my Duguth eventually broke - small wonder really as I had been using them as Geoguth up until that time!

However, the Duguth formed a solid line in front of the cavalry and eventually beat them off causing Vortigern to flee the table. The Saxon Cynning finally had is moment and launched his Gedricht, first smashing the Geoguth of Heignst and then a unit of Pedyts.

After a bright start for the forces of Vortigern the sharp blades and superior swordsmanship of the Gedricht had won the day. 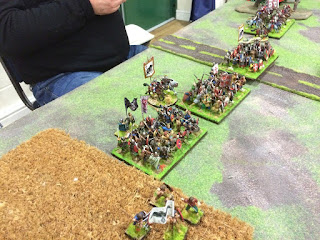 Posted by Paul Scrivens-Smith at 07:29