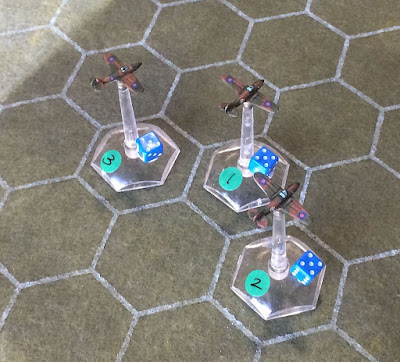 I decided to solo play the next mission in the campaign, being card driven with random movement, Bag the Hun are perfect for this.

The mission description was ‘B’ Flight is about to bounce 12 Ju87 Stukas at band 3 escorted by one schwarm of Bf110.

With such a large game it's difficult to write an accurate blog report but from the start the RAF were on their top game, With a "Tally Ho" Blue section were swooping into the rear of the Stukas and before three cards had been turned P.O. Darren Wright had shot down a Stuka, his first kill of the campaign. 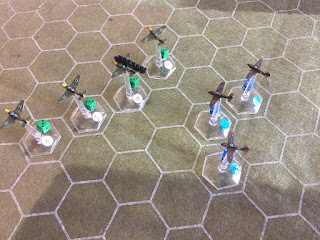 I'll give a brief resume of each pilots actions:

Pilot Officer Darren Wright: As already mentioned got a very early kill on a Stuka, and was soon on the tail of another, pouring rounds into that until that also went down in flames. With his blood up he got on the tail of a third Stuka but was driven off by excellent marksmanship from the tail gunner. Undeterred, he got onto the tail of a fourth Stuka and was really unlucky not to shoot that down before running out of ammo. P.O. Wright arrived safely back at Hendon.

Sergeant Pilot Peter Lewis: Following his leader he let a belt off into his first Stuka that exploded with no chutes seen, another Stuka soon followed its companion. Following P.O. Wrights hard evade from the tail gunner fire the formation was broken so seeking a target of opportunity Lewis latched onto one of the escorting Bf110, rounds splattered into that cockpit and the Messerschmidt turned for home with shattered control panels. Another Bf110 had manoeuvred onto his tail, but a well executed tight chandelle soon threw it off. Lewis was soon onto the tail of another Ju87, the Stuka was soon trailing fuel and a well placed burst saw a third Hun go down in a trail of smoke. Before his ammo was expended Lewis had damaged a fourth Stuka, three kills and two Hun limping home was an excellent tally.

Sergeant Pilot Charles Morris: Morris was not as fortunate as his colleagues, he tailed one Stuka pouring round after round into it, bits flew off the JU87 and the rear gunner was obviously either dead or very seriously wounded but with his ammo expended Morris was furious that the Stuka managed to limp away. Looking over his shoulder he noted a Messerschmidt on his tail, pulling hard on his stick he was unable to break the tail, the first cannon rounds tore into the fuselage and fuel spilled everywhere, more rounds caused the Hurricane to break up completely. Morris bailed out safely and was soon picked up by the local police and driven back to Hendon. 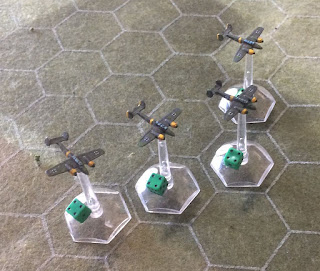 Sergeant Pilot Harry McWalters: Our man of the moment was heavily engaged in this action. As instructed by Blue One, McWalters engaged the Messerschmidts immediately downing the flight leader before turning to face the Stukas. In an uncharacteristic loss of concentration McWalters managed to jam his guns and lose his tail, breaking contact to free the jam he was soon back into the action and badly damaging three Stukas and causing a fourth to explode. McWalters expended his final ammunition attempting to take out one of the Messerschmidts but it was able to evade and break for home.

Pilot Officer Terry Smith: Early in the action the tail gunner of the Stuka that he was menacing managed to crack the engine block of the Merlin and Smith had to head for home crash landing at Martlesham Heath.

Pilot Officer Clement Bates: Bates acted as an excellent wing-man for McWalters but was unable to contribute much as his Brownings jammed early on in the action. Two Stukas suffered damage from his fire but he was unable to get his first kill of the campaign.

As can be seen of the 'dead box' at the end of this game it was rather a stunning victory for the RAF, one Hurricane had been shot down and another had been written off in a crash landing, but no pilots were lost. The Luftwaffe had suffered the loss of six Stukas and another four damaged, one Bf110 was lost and another badly damaged. The loss of pilots and air gunners was severe. 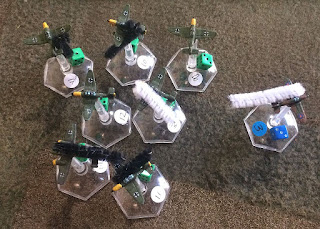 A few more shots of the action 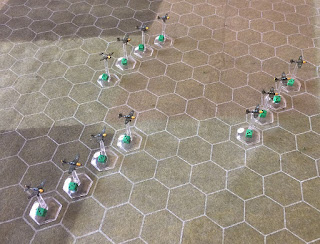 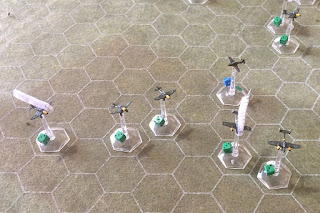 Posted by Paul Scrivens-Smith at 18:36