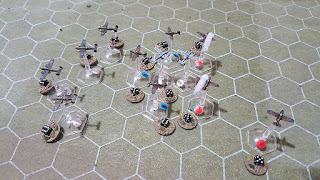 "Dear Dr and Mrs Palmer we regret to inform you that Flight Lieutenant Matthew Palmer was lost in action on the 13th July....." 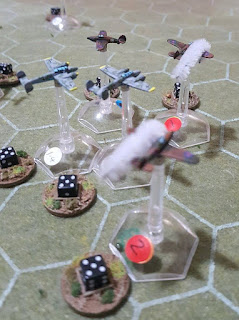 The third mission for our campaign should have been a relatively straight forward action, A Flight led by Squadron Leader Terry Deakin had bounced a pair of schwarms of Bf110. Drew played the RAF, Bruce the Luftwaffe and I helped out.

Maybe the RAF buggered up their deployment from the start, with the advantage of altitude and being able to be placed second they really struggled to get onto the tail of the Messerschmidt's. In a brief recap of the operation:

Red Section:
Sqdn Ldr Terry Deakin only managed to get a good firing solution on one occasion, his Hurricane took wing damage that saw him crash land on the way back to Hendon totalling his aircraft and with a concussion that shall see him out of action for at least three days.
Sgt. Pilot James Phillips caused quite a bit of damage to the Messerschmidt he was engaging but was unable to get the kill. Damage to his port wing saw him having to withdraw from combat and his Hurricane is now out of action for repairs.
Flt. Lt. Matthew Palmer was unable to shake the Messerschmidt on his tail, an incendiary round saw his wing fuel tank explode and no chute was seen. 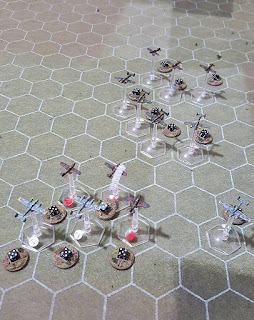 Yellow Section:
F.O. Stephen Hines got the only kill of the day, with his guns jammed he still managed to shoot down a Bf110. Unfortunately his Hurricane was a total loss when landing at Hendon but he walked away unscathed.
Sgt. Pilot Mark Wilson burned through all his ammo but did no significant damage to the enemy.
P.O. Adrian Jacobs, flush from his first kill the day before Jacobs was well in the action scoring many hits on two different Messerschmidt's but with no telling damage, he broke off and headed for home when he ran out of ammo - a common theme in his actions. 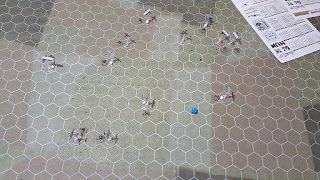 With the Squadron Leader out for a few days and no replacement Flight Leiutenant to take over from Matthew Palmer Flying Officer Damien Townsend takes command for now.

While this carnage was going on another call came in from Sector HQ. 'B' Flight were scrambled to intercept an inbound formation of JU87 Stuka. 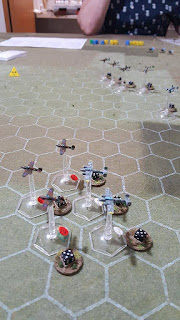 Posted by Paul Scrivens-Smith at 09:49