This week there has been more 'vroom' on the Maximillian 1934 painting with two more cars added. 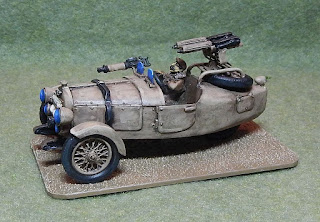 Firstly a First Corps three-wheeled Speedster that has been customised with a pair of twin-linked Vickers machine-guns and a Lewis gun, like the four-wheeler I painted last week, it's a beautiful model with bags of character.

The machine-guns and luggage rack are from the Eureka miniatures accessories pack. 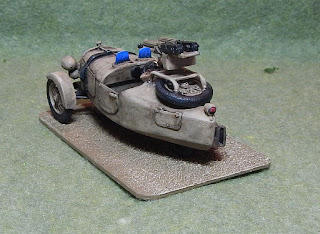 The light brown is from a base-coat of Vallejo US Tan Earth highlighted up with Light Sand while the rusty exhaust is a mix of Gunmetal Grey and Saddle Brown, highlighted by adding some silver to the mix. 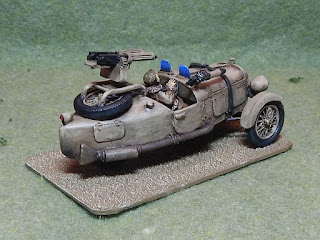 It does not show so well in the photo but the driver has a tweed cap, you do need to look really closely though. 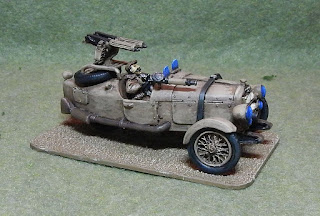 The whole thing was finished using a Tamiya weathering kit. 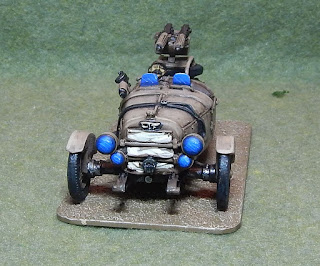 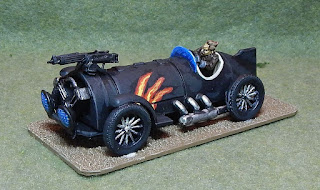 Next a Eureka Miniatures Roadster that was done in a bit of a hurry to prepare for Thursdays game.

When I did the build on this one I wanted it to look rather fast, so the engine part from the Tribekka model was glued on front as a super-charger and huge twin exhausts were added, I think it certainly has the 'go faster' look.

The sole armament is a pair of twin linked Vickers fixed forward over the radiator. I also added a small cardboard windscreen. 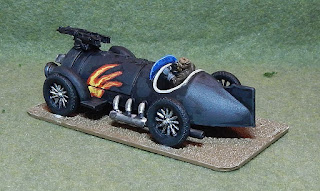 As I wanted to get it ready quickly for our game on Thursday I started with a black base-coat that was highlighted in Black Grey, the interior was done with a cream leather using Iraqi Sand as a base and I decided that to tart her up it was going to need some flames from a mix of Flat Red, Signal Orange and Flat Yellow.

The wheels and exhausts were painted in Gunmetal Grey and chromed with Silver. 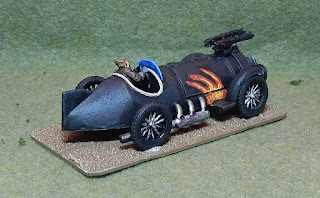 Overall I think I managed the 'go-faster' look on this one. 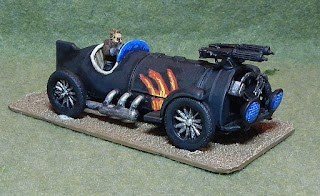 I'll be putting up a report of Thursdays game soon. 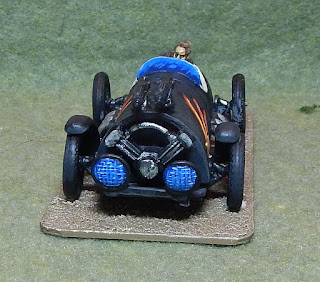 Posted by Paul Scrivens-Smith at 10:12