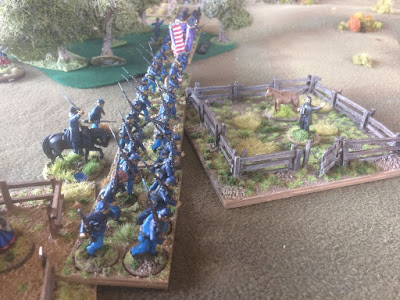 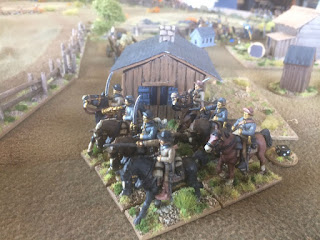 As the forces were so large both sides started at +4 Force Morale and we used the blank card in the deck with the following rules:

If it was the first card drawn the blank counts as a Tiffin.
If drawn in a sequence of Command cards it breaks the sequence.
The card has no other effect. 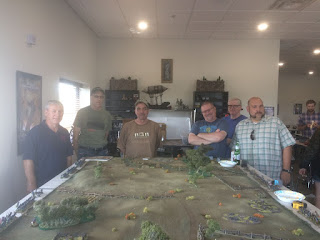 Kevin and John would command the Union forces while Phil, Bruce and Seth commanded the Confederates.

A side objective of the game allowed a bonus for escorting civilians from the battlefield, while points could also be gained for torching buildings on the enemy side of the table. 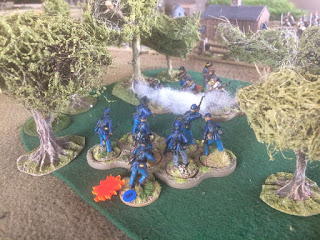 Both sides were soon in action and brisk firefights between skirmishers were soon taking place in the woodlands on each flank of the battle.

One of the first casualties of the first Union volley of the game was Mollie, a civilian that the Confederates had been escorting from the battlefield! 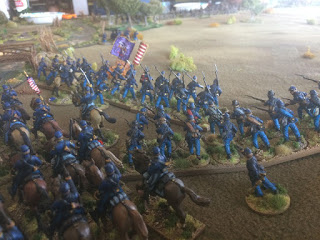 Late to the fray the Union horse forded Deer Creek and were soon advancing through the marshy ground on the Confederate right flank.

Meanwhile in the centre the Confederate line was being shattered by the controlled Union volleys supported by the artillery piece. 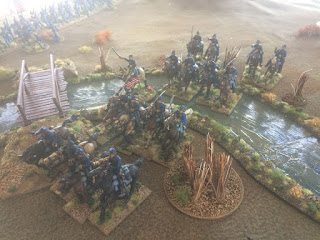 Having had their line broken in the centre the Confederate morale collapsed when a Union sergeant leading a group of infantry was detached to support the struggling Union skirmishers in the wood and instead took on the Confederates at bayonet point clearing them out and securing that flank.

The subsequent Force Morale tests saw the Confederates recognised their exposed position and start an organised withdrawal before the battle became a rout. 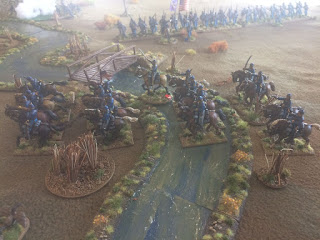 A major victory to the Union forces although a reporter and photographer from "La Presse" recorded the death of Molly by a Union minnie and the subsequent fall-out tempered the victory slightly.

As always Sharp Practice gives a great narrative game and even with six players does not get bogged down. 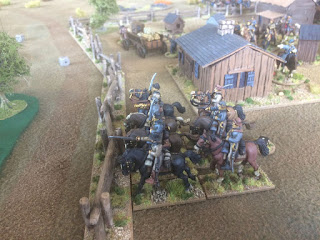 Hope to be able to report on more games after I get back from the UK later in the month. 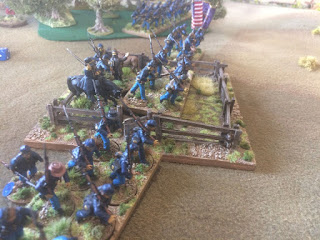 Posted by Paul Scrivens-Smith at 15:23