First batch of terrain for Seven Days to the River Rhine 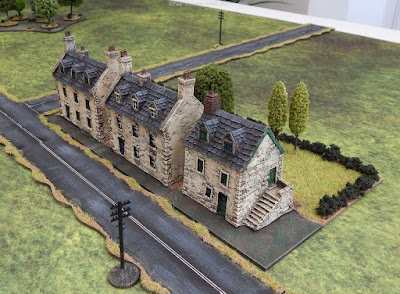 Starting a new project is great, but along with all the lovely shiny new troops you can buy, if it's going to be in a new scale then you'll also need to sort out terrain to play on.

I ordered a load of trees from Timecast with my last order for the BMP's and these have mostly been based up and can be seen in a few of the images, a few were set aside to use with the other terrain pieces. 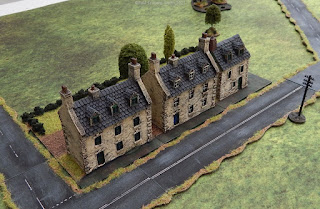 I've put in another order with Timescale for some of their buildings, but in the meantime made an order to Arcane Scenery for some of the 10mm Battle Scale buildings they do.

They are very clean castings that take very little preparation. After a quick wash with some detergent they are primed first grey and then dark brown with the cream coloured rendering bought up from that in successive layers. I did the windows in my non-glassy-glass method, but it really does not show in these photos. Also the painstakingly painted dark green window frames likewise don't show up! 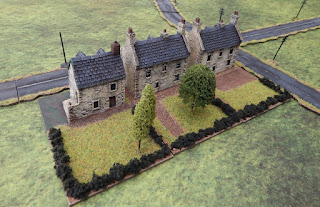 Once the painting completed I based them on Warbases 120mm x 80mm bases, added texture, lawn and paths and used a some of the aforementioned trees in a couple of of the gardens. 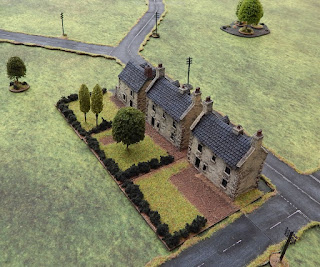 The front kerbsides and driveways were done in a dark grey colour. 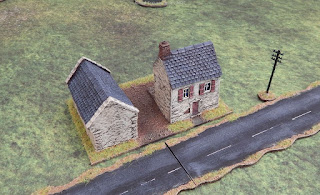 Another pair of the Battle Scale buildings were done up on a single base as a farm and stables. 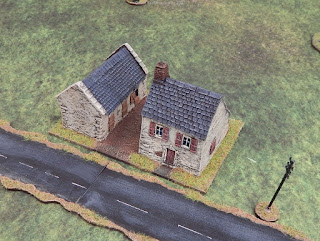 I plan to be adding some fences, walls and other field boundaries to the collection to break up the landscape more. 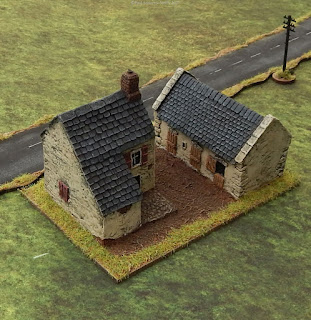 Also included in the Warbases order was some of their "Ponds" that I used most of to make some terrain bases for the woodland. 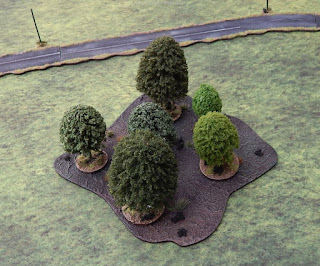 About half of the trees are from the Timescale range, the remainder are from a pack of Busch N gauge trees picked up from eBay, also sourced from eBay were the N gauge telegraph poles seen in many of the images. 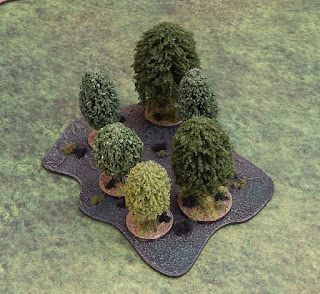 The smallest of the Warbases ponds was done as a pond, it does not show up to well in this photo, but the water effect is done with PVA glue. It may benefit from a coat of gloss varnish when the rest of the paints arrive in my container. 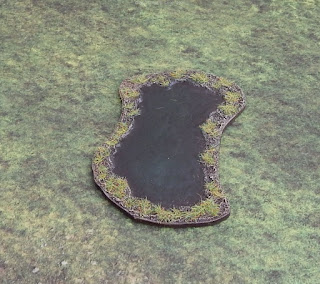 Warbases also do a range of modular river sections so I picked up a few sets of these and purposed them as roads for our games. 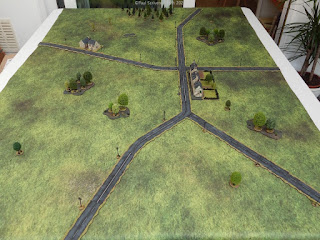 The photo above is using about 90% of what I got painted so I've got enough for a good road system on a 6' x 4' board with enough spares to add some variety to the mix. 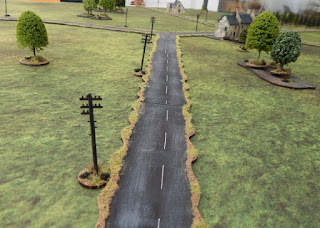 The final few shots show some of the troops and vehicles in place to give an idea of sizes.

There is enough terrain to be getting on with for a fairly open game, but once the other buildings, fences, etc arrive and get painted it should allow a lot more cover and concealment for both sides