Bundeswehr Force for Seven Days to the River Rhine 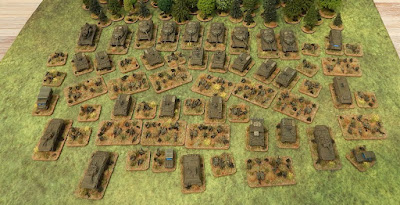 These past few weeks I've been getting on with some West German Bundeswehr to be able to either play against my own Soviet forces or for those games when my opponent fields their own Soviet force.

As usual, I've burst right through the usual 600 point force that you need for gaming, but at least I'll have plenty of optional variants to choose from.

The Battlegroup HQ is a Infantry team in a M113, I like to add a command vehicle to the HQ to help remind me which it is during the games. These are from the Timecast range. 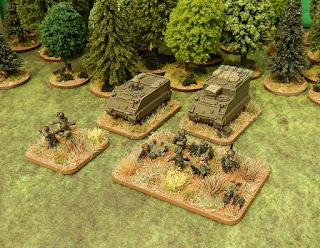 The first unit is a platoon on Leopard 1A1A1 from Timecast, I went with the older tanks and APC's as I want to base my force around a unit of reservists rather than regulars.

A second platoon of Leopard 1A1A1 complete the tank contingent.

The main force of the battlegroup is three platoons of reservists in M113 APC's each platoon supported by a Milan ATGW team and a M3 MG in sustained fire mode. 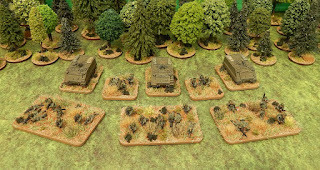 Again all the infantry and APC's in these three units are from Timecast.

Like the armour I've used older equipment and not gone for the NATO three colour camo scheme that started to be introduced around this time to reflect the second line nature of the troops.

Indirect fire support is provided by a pair of M113G Panzermörser, again these are from Timecast. 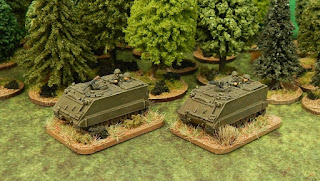 Armoured reconnaissance assets are represented by a trio of Spahpanzer Luchs armoured cars, these models are from Red3 and fit in really nicely with the Timecast stuff.

There is also some heavy support in the form of a Gepard and a Jaguar 2, these are both 3D prints provided by chum Martin. My ham fisted clean up job means that I've had to hide some damage I did to the running gear on them both with basing materials. 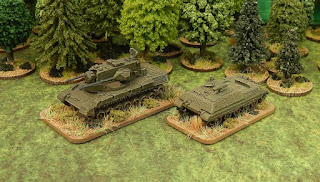 I've done some 'soft' reconnaissance units too, three sets of infantry scouts, and two units in VW Iltis jeeps, this is a lovely model again from the Red3 range.

The final grouping is a mixed platoon mounted in a pair of Fuchs wheeled armoured personnel carriers and a Unimog truck. The Fuchs with the Milan mount is another 3D print from Martin while the other Fuchs and the Unimog are again from Red3.

As I do over-do things there were far too many Milan teams purchased, these last four will likely never get used in any games, as four is more than enough, realistically two is enough.

A few close-ups of individual vehices. 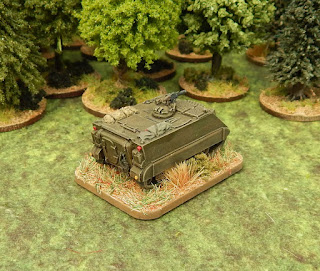 The vehicles are done from a grey primer then base-coated in Mig NATO Green, the tracks, wheels, weapons etc. are painted in VMC Black Grey, and the entire thing dirtied up with a stipple of VMC Flat Earth. 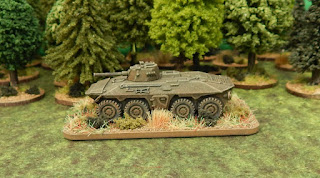 The G3 stocks and tool handles are picked out in VMC Beige Brown. Tarps, camouflage nets, etc. are painted in VMC German Uniform, VMC Khaki or VMC Camo Beige, the mantlet covers on the Leopards are also painted VMC German Uniform. Once dry the entire thing is given a light dry-brush of VMC Iraqi sand. 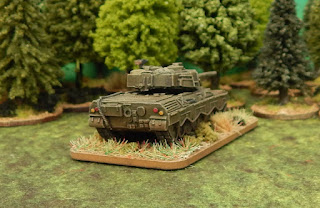 They are set-aside for at east a couple of hours and then the whole thing is washed with AP Military shader and again set-aside to dry. The VMC German Uniform, VMC Khaki or VMC Camo Beige are over-painted and highlighted and then the vehicles were based then finished off using the Dark Sand powders from a Tamiya Model Master kit and a couple of coats of matt varnish applied. 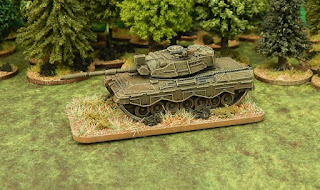 I'm pretty happy how they came out, I think that the photos show them a bit lighter than they are in the flesh.