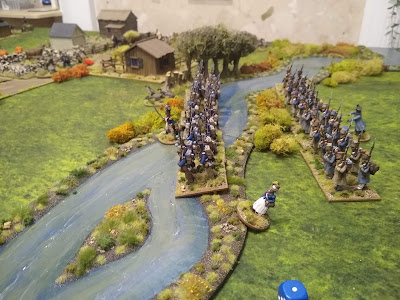 Yesterday evening Tom bought his Peninsular British over for a game of Sharpe Practice against my French.

The table was set up as below, the forces were the "British Regulars" pitted against "French Regulars to 1812" Tom was reinforced by another Lvl 1 leader and a unit of British Line Infantry while I added a Lvl 1 leader and two units of French Line infantry. We would play the Encounter scenario. 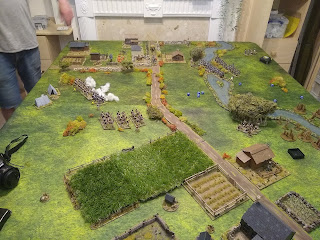 I was busy chatting and looking up rules that I had last played in - checks blog - May 2019, no wonder I was rusty.
Initial blood was to the French when a Lvl 2 French officer leading the skirmishers was felled by volley fire. Both sides shuffled towards each other slowly, the French because they had to ford a stream, the British appeared to have forgotten their shoes - never seen so many twos, threes and fours rolled on 2D6 for movement. 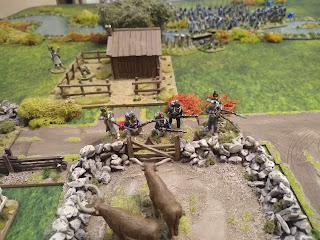 Both sides eventually established a skirmisher advantage on their right flanks, as the infantry trudged together in the centre. 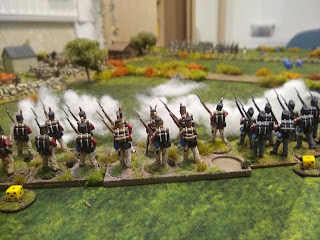 Superior British firepower soon began to tell and the French line started to thin out although they were able to manage their shock well as they closed the gap with a coupe of Pas De Charge. 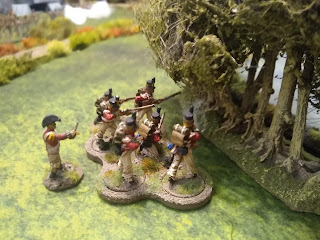 It was not to be though, officer casualties among the French mounted and a clash into combat by the French line saw a desperate struggle that eventually saw the British coming out on top. 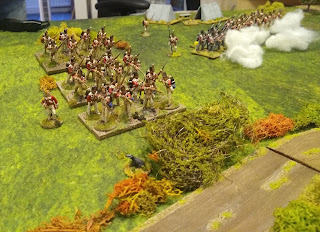 It was good to get a refresher in, next time we should play a scenario and I'll be a little less rusty with the rules.

I'm sure that Tom will update his blog soon.