The Battle of Hawkes Farm at Little Wars 2019 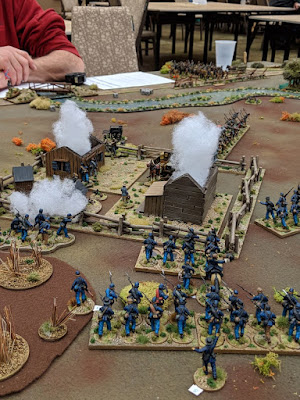 A couple of weeks ago I ran a Sharp Practice game for six players at Little Wars using the American Civil War collection.

The scenario was that the Confederates had been using Hawkes Farm as a supply depot, but an outflanking manouver by Union troops had forced an hasty abandonment. Both sides now realised that the farm should be recaptured so set out to claim it.

The game was played as a standard battle scenario, but each commander was given a major and a minor objective of their own that they were not to share with any of the other players.

In many of our Sharp Practice games we forget some of the role-playing aspects of the game and just get on with the battle, so these minor and major objectives allowed us to re-engage with that side of the game. 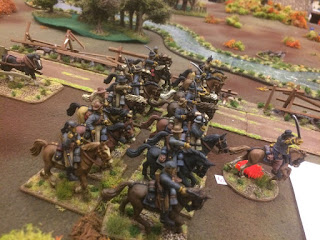 Each player had a play sheet denoting their troops and special rules along with their own objectives.

This command was played by Kevin. 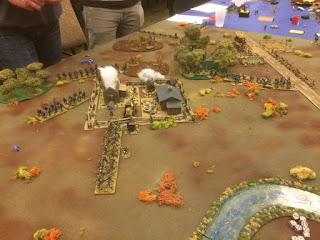 This command was played by Allan.

Major Objective: Beat an enemy group or formation by at least ‘Defeated by 2’ with a mounted charge
Minor Objective: Escort the cannon and limber off the southern road.

I initially played this command as we had a player Pat, who was completing an earlier game then he took over. 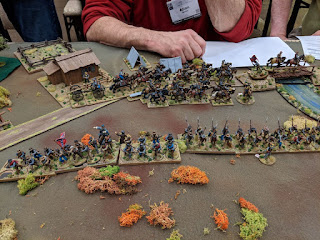 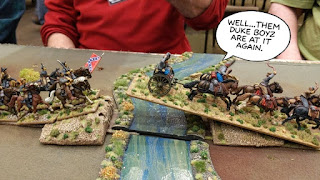 Major Objective: The colonel does not hold you in the esteem that you believe you should be, you need to burn the farm house and barn to the ground. Your men are equipped with tinder boxes and supplies to do this.
Minor Objective: If you are going to lose the game it would look better for you if you were incapacitated, if you lose the game and have been wounded this is a minor objective, not if you win. 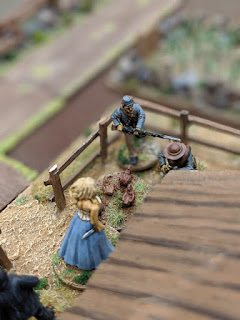 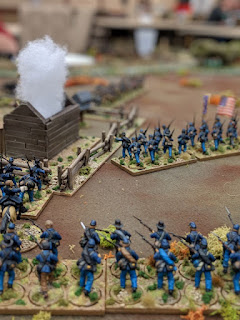 Major Objective: Cause any group or formation of Confederate horse to break and run either by fire or steel. 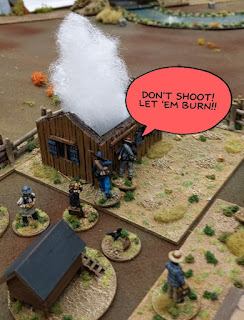 The game played out well, initially the players were getting their troops into place and starting the first firefights, it was lucky that I started off playing the Confederate horse as the players soon twigged that I was running the cannon off the table and started to get into achieving their own objectives. 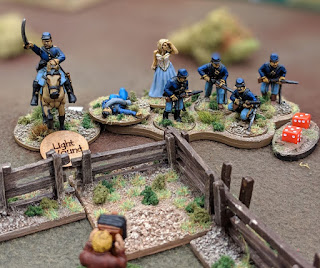 After that it was a free-for-all while players both concentrated on winning the battle, but also achieving their goals. Allan soon had a team in the farmhouse ransacking the safe while Chris was firing the barn. Liams men went hunting down chickens and Drew was escorting civilians to safety all the while the battle raged.

I felt quite sorry for Kevin and shall have to revise Turnbulls objectives as they are rather out of his hands. 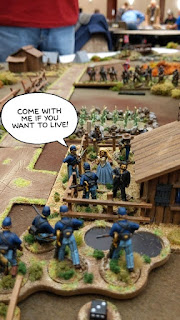 Much of the action occurred around a small outbuilding where two Confederate soldiers had gone to present their cards after an 'event', two of Liams Union troops where rounding up chickens and the Union horse were trying to convince the farmer and his daughter to leave all the while Kevins troops were firing volleys into it. 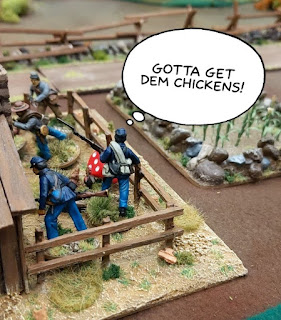 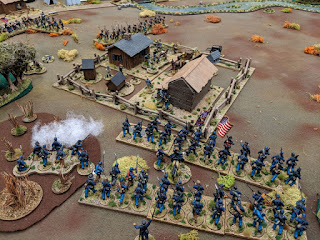 A sharp firefight was taking place on the southern edge of the farm and the Union troops under Chris initially had the upper hand but as his commander was elsewhere the Confederates of Allan were better able to manage their shock.

The firefights, and the battle, were resolved by a Confederate cavalry charge into the Union foot causing the foot to break and the Union morale to collapse. 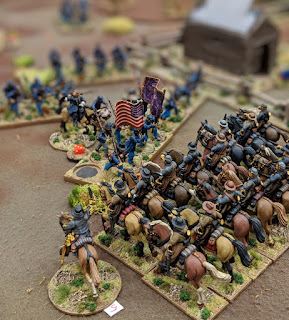 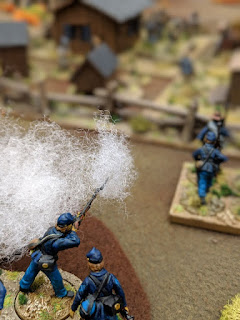 On the Union side, as the farm was on fire and he had been wounded Chris was our star player having achieved both his objectives first. Liam had captured two bases of chickens. Drew had escorted one civilian to safety.

For the Confederates, Kevin had not achieved any objectives, but that is more my fault than his, Allan had both cracked the safe and made it away with his cracker alive and Pat/myself had scooted away the cannon and performed a victorious cavalry charge. 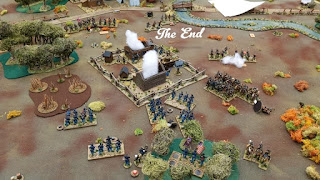 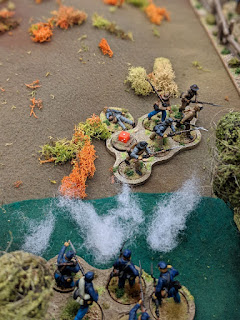 Many thanks to chum Drew who took most of the photos, I found that I'd only taken a handful during the game. 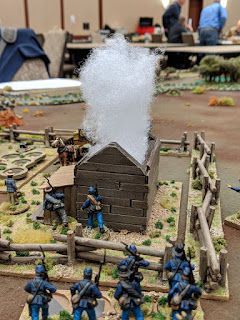 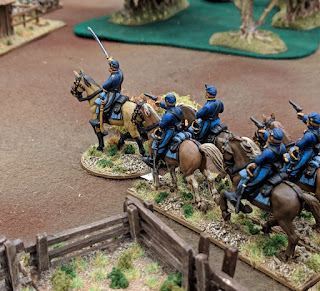 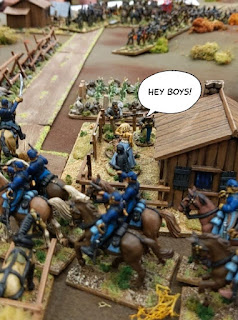 Posted by Paul Scrivens-Smith at 07:06