Recently browsing Jim's blog I noticed that he was painting some of the lovely 1/2400 Iron Clads from Tumbling Dice which reminded me that in the 'pile of shame' were some 1/2400 Napoleonic Naval ships also from Tumbling Dice.

Back in the day I painted about 70 of these and played many a game before selling them on, but the lead mountain still contained at least a couple of dozen of these, plenty enough for a game so I decided that I'd like to get a few done - it seems to be any excuse not to paint 28mm these days!

Firstly a batch of three French ships a pair of 3rd rates each armed with 80 guns and a 5th rate frigate with 40 guns.

Not sure if it the lighting or my paint jobs but a lot of these photos are really washed out.

The paint job is very simple, don't assemble, undercoat, then paint the decks VMC Deck Tan, the sails VMC Pale Sand, the hulls and masts VMC Gold Brown and then strakes and spars in VMC black.


The bases are painted in VMC Royal Blue. I then assemble all the components with super-glue and when that is dry wash with AP Strong Tone.

After drying the sails are over painted again with VMC Pale Sand and the base is re-painted Royal Blue and then highlighted with a glaze of Royal Blue mixed with Light Blue, finally a bit of white is added along the sides of the ship and in the wake.

A little extra painting on these as you have to at least make an attempts at doing some Nelson Checkers.


The rigging is done with the black nylon bristles cut from a brush that I picked up at a local DIY store stuck on with PVA glue. After the glue is dried the bristles are cut to size and any paintwork touched up as needed.

Ensigns are painted tiny and stuck on with PVA glue.


The last batch is a pack of four cutters, these things are tiny, that is a 40mm x 20mm base they are on. I left off the ensigns as they can be used for either side, and at this small anything is going to look massively oversized.

I tried to get some close ups so here is a Royal Navy 50-gun and a French 40-gun Frigate. 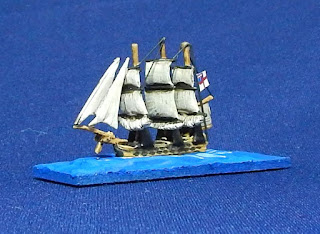 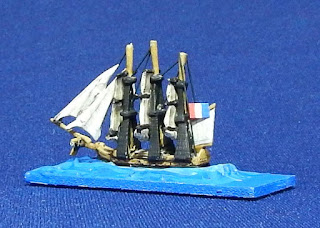 I've probably got enough done to play a small game, but there is plenty more in the pipeline to paint if I wanted.

Looking back on the blog, I last played the old Games Workshop Trafalgar rules back in 2012 when Ian blew me out of the water...

Posted by Paul Scrivens-Smith at 16:12