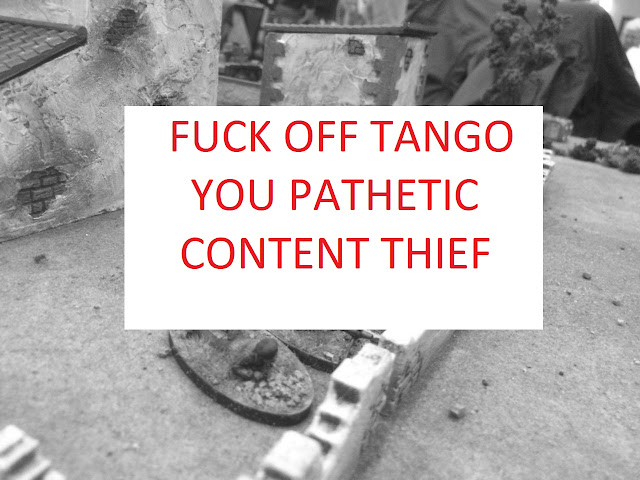 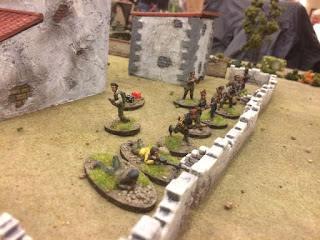 I attended Little Wars this past weekend and was fortunate to be able to play in Liam Hardings Battle of Guadalajara 1937 Spanish Civil War scenario using the Big Chain of Command rules alongside the Espana supplement.

The scenario we played was a Nationalist attack on a Republican held walled manor house. 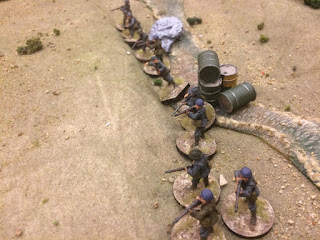 Three of us would play the Nationalists attacking with a force of CTV infantry and tanks and a Falange while the defenders had militia and International Brigade, I commanded the CTV tanks, thre CV-33 and a CV-33 flame-thrower. The scenario was the Hasty Defence from the new 1940 supplement.

All units rolled very low for Force Morale and it looked like it would be quite the challenge for us all. 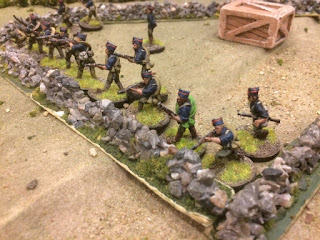 During the Patrol Phase we pushed hard on the left flank and did very little on the right, two of our jump-off paints for the Falange were well over the half way mark on the right hand edge of the table and our CTV would deploy in the dried river bed. The CTV tanks I would command came on a road that marked the left of our deployment zone but was in actuality about the center of the table.

The Nationalists would go first, as a part of our supports we had purchased a pre-game bombardment, meaning that we had a least one phase of disruption on the Republic before they either spent the Chain of Command dice that they started with or they allowed it to continue. 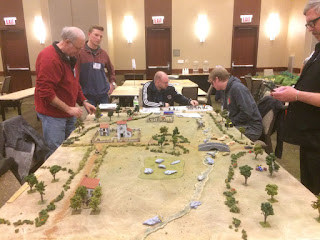 As suspected the Republic did spend their Chain of Command Dice to end the barrage, but the first turns effect was good enough. We had set up a good fire base opposite the manor and were pushing a patrol through the woods towards a vulnerable jump-off point on their left flank.

The Republican militia deployed into the manor and some effective overwatch firing from both the CTV and Falange saw five dead and a whole load of shock on them. Also the threat to their second jump-off from the Falange patrol meant that the Republicans had to commit the remainder of their militia column there rather than in the manor. 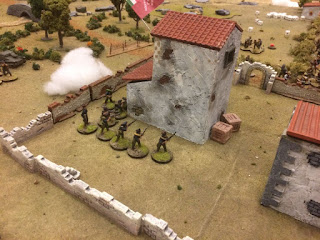 The Italian tanks moved onto the board and started to cross the stream and advance on the manor under the cover of some woods, a well deployed Republican anti-tank gun made them act with caution and a T-26 was on the prowl.

The T-26 took some inaccurate shots at my CV-33 tanks but was driven off by a shot from our 65mm howitzer leaving the Italian tanks free to advance on the manor. Effective fire from our infantry, tanks and support weapons had sorely reduced the defenders and a couple of blasts from our CV-33 flame tank saw them break. 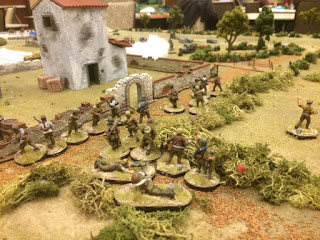 With the International Brigades still rushing from their positions on the Republican right to reinforce the militia the Falange crossed into the compound and took the manor house expending a Chain of Command dice to end the turn and therefore win us the game.

Liam had organised a great scenario for the game and as you can see in the few images I captured his terrain and figures look brilliant. We had been very fortunate in the Patrol Phase, then the terrible dice that Allan had rolled for the hits on those militia in hard cover had really weakened their defences.

Posted by Paul Scrivens-Smith at 07:50